Ammonium chloride NH4Cl is an inorganic compound with the formula NH4Cl. It is a white crystalline salt that is highly soluble in water. Solutions of ammonium chloride are mildly acidic. Sal ammoniac is a name of natural, mineralogical form of ammonium chloride. The mineral is especially common on burning coal dumps (formed by condensation of coal-derived gases), but also on some volcanoes. It is the product from the reaction of hydrochloric acid and ammonia.

It is a by-product of the Solvay process used to produce sodium carbonate.[3]

Ammonium chloride is prepared commercially by combining ammonia (NH3) with either hydrogen chloride or hydrochloric acid:[3]

Ammonium chloride occurs naturally in volcanic regions, forming on volcanic rocks near fume-releasing vents (fumaroles). The crystals deposit directly from the gaseous state, and tend to be short-lived, as they dissolve easily in water.[4]

Giant squid and some other large squid species maintain neutral buoyancy in seawater through an ammonium chloride solution which flows throughout their body and is lighter than seawater. This differs from the method of flotation used by fish, which involves a gas-filled swim bladder. The solution tastes somewhat like salmiakki and makes giant squid unattractive for general human consumption. 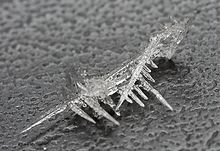 In biological applications ammonium chloride serves as a nitrogen source and is used in fertilizers, as a feed supplement for cattle and as an ingredient in nutritive media for yeasts and many microorganisms.

Ammonium chloride is an ingredient in fireworks and safety and contact explosives.

Ammonium chloride is used in the textile and leather industry in dyeing, tanning textile printing and to luster cotton.

Ammonium chloride is used as a flux in preparing metals to be tin coated, galvanized or soldered. It works as a flux by cleaning the surface of workpieces by reacting with the metal oxides at the surface to form a volatile metal chloride. For this purpose, it is sold in blocks at hardware stores for use in cleaning the tip of a soldering iron and can also be included in solder as flux.

Ammonium chloride is used as an expectorant in cough medicine. Its expectorant action is caused by irritative action on the bronchial mucosa. This causes the production of excess respiratory tract fluid which presumably is easier to cough up. Ammonium salts are an irritant to the gastric mucosa and may induce nausea and vomiting.

Ammonium chloride is used as a systemic acidifying agent in treatment of severe metabolic alkalosis, in oral acid loading test to diagnose distal renal tubular acidosis, to maintain the urine at an acid pH in the treatment of some urinary-tract disorders.

Ammonium chloride is used to spice up dark sweets called salty liquorice, in baking to give cookies a very crisp texture, and in the flavouring Salmiakki Koskenkorva for vodkas. In sub-continent (Indo-Pak), its used in making daily snacks like samosa and jalebi for crispiness.

Ammonium chloride is used in a ~5% aqueous solution to work on oil wells with clay swelling problems. It is also used as electrolyte in Zinc–carbon batteries. Other uses include in hair shampoo, in the glue that bonds plywood, in cleaning products like lysol. In hair shampoo, it is used as a thickening agent in ammonium-based surfactant systems, such as ammonium lauryl sulfate.