In the 1980s, Solidarity was a broad anti-bureaucratic social movement, using the methods of civil resistance to advance the causes of workers' rights and social change.[4] The government attempted to destroy the union during the period of martial law in the early 1980s and several years of political repression, but in the end it was forced to negotiate with the union.

The Round Table Talks between the government and the Solidarity-led opposition led to semi-free elections in 1989. By the end of August a Solidarity-led coalition government was formed and in December 1990 Wałęsa was elected President of Poland. Since then it has become a more traditional, liberal trade union. 30 years after emerging its membership dropped to over 400,000.[1] 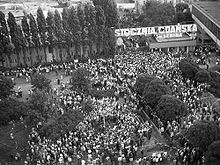 Solidarity emerged on 31 August 1980 in Gdańsk at the Lenin Shipyards when the communist government of Poland signed the agreement allowing for its existence. On 17 September 1980, over 20 Inter-factory Founding Committees of free trade unions merged at the congress into one national organization NSZZ Solidarity.[3] It officially registered on 10 November 1980.[5]

Lech Wałęsa and others formed a broad anti-Soviet social movement ranging from people associated with the Catholic Church[6] to members of the anti-Soviet Left. Solidarity advocated non-violence in its members' activities.[7][8] In September 1981 Solidarity's first national congress elected Lech Wałęsa as a president[5] and adopted a republican program, the "Self-governing Republic".[9] The government attempted to destroy the union with the martial law of 1981 and several years of repression, but in the end it had to start negotiating with the union.

In Poland, the Roundtable Talks between the government and Solidarity-led opposition led to semi-free elections in 1989. By the end of August a Solidarity-led coalition government was formed and in December Tadeusz Mazowiecki was elected Prime Minister. Since 1989 Solidarity has become a more traditional trade union, and had relatively little impact on the political scene of Poland in the early 1990s. A political arm founded in 1996 as Solidarity Electoral Action (AWS) won the parliamentary election in 1997, but lost the following 2001 election. Currently, as a political party Solidarity has little influence on modern Polish politics.

In Solicitudo Rei Socialis, a major document of Catholic Social Teaching, Pope John Paul II identifies the concept of solidarity with the poor and marginalized as a constitutive element of the Gospel and human participation in the common good. The Roman Catholic Church, under the leadership of Pope John Paul II, was a very powerful supporter of the union and was greatly responsible for its success. Lech Wałęsa, who himself publicly displayed Catholic piety, confirmed the Pope's influence, saying: The Holy Father, through his meetings, demonstrated how numerous we were. He told us not to be afraid.[10]

In addition, the priest Jerzy Popiełuszko, who regularly gave sermons to the striking workers, was eventually killed by the Communist regime for his association with Solidarity. Polish workers themselves were closely associated with the Church, which can be seen in the photographs taken during strikes in the 1980s. On the walls of several factories, portraits of the Virgin Mary or John Paul II were visible.

The survival of Solidarity was an unprecedented event not only in Poland, a satellite state of the USSR ruled (in practice) by a one-party Communist regime, but the whole of the Eastern bloc. It meant a break in the hard-line stance of the communist Polish United Workers' Party, which had bloodily ended a 1970 protest with machine gun fire (killing dozens and injuring over 1,000), and the broader Soviet communist regime in the Eastern Bloc, which had quelled both the 1956 Hungarian Uprising and the 1968 Prague Spring with Soviet-led invasions.

Solidarity's influence led to the intensification and spread of anti-communist ideals and movements throughout the countries of the Eastern Bloc, weakening their communist governments. The 4 June 1989 elections in Poland where anti-communist candidates won a striking victory sparked off a succession of peaceful anti-communist revolutions in Central and Eastern Europe[6] known as the Revolutions of 1989 (Jesień Ludów). Solidarity's example was repeated in various ways by opposition groups throughout the Eastern Bloc, eventually leading to the Eastern Bloc's effective dismantling, and contributing to the dissolution of the Soviet Union, in the early 1990s.

Although Leszek Kołakowski's works were officially banned in Poland, underground copies of them influenced the opinions of the Polish intellectual opposition. His 1971 essay Theses on Hope and Hopelessness, which suggested that self-organized social groups could gradually expand the spheres of civil society in a totalitarian state, helped inspire the dissident movements of the 1970s that led to the creation of Solidarity and provided a philosophical underpinning for the movement.

Formed on 31 August 1980,[12] the union's supreme powers were vested in a legislative body, the Convention of Delegates (Zjazd Delegatów). The executive branch was the National Coordinating Commission (Krajowa Komisja Porozumiewawcza), later renamed the National Commission (Komisja Krajowa). The Union had a regional structure, comprising 38 regions (region) and two districts (okręg). At its highest, the Union had over 10 million members, which became the largest union membership in the world. During the communist era the 38 regional delegates were arrested and jailed when martial law came into effect on December 13, 1981 under General Wojciech Jaruzelski. After a one year prison term the high-ranking members of the union were offered one way trips to any country accepting them (including Canada, the United States, and nations in the Middle East).

Solidarity was organized as an industrial union, or more specifically according to the One Big Union principle, along the lines of the Industrial Workers of the World and the Spanish Confederación Nacional del Trabajo (workers in every trade were organized by region, rather than by craft).[13]

In 2010, Solidarity had more than 400,000 members.[1] National Commission of Independent Self-Governing Trade Union is located in Gdańsk and is composed of Delegates from Regional General Congresses.

Solidarity is divided into 37 regions, and the territorial structure to a large degree reflects the shape of Polish voivodeships, established in 1975 and annulled in 1998 (see: Administrative division of People's Republic of Poland). The regions are:

The network of key factories

The network of Solidarity branches of the key factories of Poland was created on 14 April 1981 in Gdańsk. It was made of representatives of seventeen factories; each stood for the most important factory of every voivodeship of the pre-1975 Poland (see: Administrative division of People's Republic of Poland). However, there were two exceptions. There was no representative of the Koszalin Voivodeship, and the Katowice Voivodeship was represented by two factories: