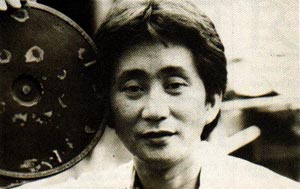 Ishmael Bernal (, - , ) was an acclaimed Filipino film, stage and television director. He was also an actor and scriptwriter. Noted for his s particularly with and issues, his 1985 film about the justification of abortion "" is often cited as one of the greatest Filipino films of all time.

Born in on , Bernal was the son of Elena Bernal and Pacifico Ledesma.

Ishmael Bernal truly loved the arts. He nurtured his passion for literature and theater by actively participating in the U.P. Dramatic Club] while finishing a college degree. He was also an avid fan of classical music including opera. During the 1960s, Bernal put up "When It's A Grey November In Your Soul", in which became one of the favorite watering holes of Manila's artists and intellectuals. Unfazed by its short live-success, Bernal put up "Kasalo" in Quezon City three decades later, which became the hang-out of students, journalists, poets, bands, theater and film artists.

Bernal directed and wrote his first film, "Pagdating Sa Dulo" (At The Top), in 1971. In this film we catch a glimpse into what Ishmael Bernal's ouvre would prefigure for the industry: it is a scene showing an aspiring actress (played by the late Rita Gomez) pondering on dreams blooming in deserts of desolation and dying out in a mirage that painfully conjures images of squatter colonies and sordid lives. The bold star stares out into the landscape and scans it, with the camera acting as her surrogate, but finally framing her against the embarrassingly majestic Cultural Center of the Philippines. The scene captures it all: the decadence of the Martial Law regime, along with its perverse aspirations to art, has doomed the destinies of Filipinos. From that time on, Bernal was established as an innovative and intelligent filmmaker who would not be content with conventional formulas of local film making. Under his name is a broad range of film genres and themes: historical dramas like "El Vibora" (The Viper), and the Bonifacio episode in the unreleased "Lahing Pilipino" (The Filipino Race); sophisticated comedies like "Tisoy" (Mestizo), "Pabling" (Playboy), "Working Girls I" and "Working Girls II"; experimental films like "Nunal Sa Tubig" (Speck In The Water) and "" (Miracle); and contemporary dramas exploring human psyches and social relationships, such as "Ligaw Na Bulaklak" (Wildflower), "Mister Mo, Lover Boy Ko" (Your Husband, My Lover), "Ikaw Ay Akin" (You Are Mine), "Relasyon" (The Affair), "Aliw" (Pleasure) and the film classic "Manila By Night" (or "City After Dark"). His sturdy filmography is mainly clustered around the themes and problems that inevitably encrust the "social" as the core of personal malaise.

Bernal considered himself a feminist director and admitted that it was part of his interest to tackle issues affecting women. A significant part of his work is stories about and for women. For example, "Relasyon, (1985)," and "Working Girls". Before Bernal died in Quezon City on , he was scheduled to direct a film about the life story of Lola Rosa Henson, the during the Japanese invasion of the .

Aside from film, Bernal also directed television shows like the long-time drama series "Ang Makulay Na Daigdig Ni Nora" (The Colorful World of Nora) for which he was named Outstanding Director in a Drama Series by the Patas Awards in 1979; "Metro Magazine", "Isip Pinoy", "Dear Teacher" and episodes for "PETABISYON" and "Lorna". As an actor, he played lead roles in stage plays like "Kamatayan Sa Isang Anyo Ng Rosas" (Death in the Form of a Rose) in 1991 and "Bacchae" in 1992.

Bernal is a tireless and committed educator. He taught film direction to film students of the University of the Philippines and Polytechnic University of the Philippines. He has conducted film and theater workshops and directed plays for school-based theater groups. He has also collaborated with artists from different regions through BUGKOS, the national coordinating center for people's art and literature. A real art crusader, he supported and co-facilitated workshops and critic sessions for aspiring writers until his last days.

He won the Urian for best director four times for "Dalawang Pugad, Isang Ibon" (Two Nests, One Bird), 1977; "Broken Marriage", 1983; "Hinugot Sa Langit" (Wrenched From Heaven), 1985; and "Pahiram Ng Isang Umaga" (Lend Me One Morning), 1989; and the best screenplay for "City After Dark", 1980. His film "Pagdating Sa Dulo", won for him the FAMAS for best screenplay award while "Himala" (Miracle), 1982, garnered nine major awards in the Metro Manila Film Festival. In that same year, Bernal was chosen by the Manunuri ng Pelikulang Pilipino as the Most Outstanding Filmmaker of the Decade 1971-1980. Among the 10 best films chosen by the critics, five were his. These include "Pagdating Sa Dulo", "Nunal Sa Tubig", "Manila By Night", "Himala" and "Hinugot Sa Langit". He was also hailed as Director of the Decade by the Catholic Mass Media Awards (CMMA).

Bernal, the daring artist, bohemian, and activist, undermined the established canons of the Philippine popular movies from within, created a void, and then filled it with cinematic excess, an hysteria that was illuminating and iridescent.