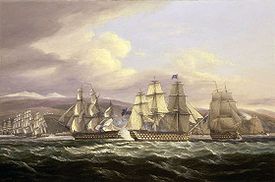 An action during the British fleet's blockade of the French port of Toulon between 1810 and 1814, depicted by Thomas Luny 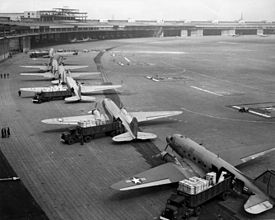 C47s unloading at Tempelhof Airport in Berlin, part of the airlift of supplies which broke the Soviet Union's 1948 land blockade of West Berlin

A blockade is an effort to cut off food, supplies, war material or communications from a particular area by force, either in part or totally. A blockade should not be confused with an embargo or sanctions, which are legal barriers to trade, and is distinct from a siege in that a blockade is usually directed at an entire country or region, rather than a fortress or city. Most blockades historically took place at sea, with the blockading power seeking to cut off all maritime transport from and to the blockaded country; although stopping all land transport to and from an area may also be considered a blockade. In the 20th century air power has also been used to enhance the effectiveness of the blockade by halting all air traffic within the blockaded air space.

Close patrol of the hostile ports, in order to prevent naval forces from putting to sea, is also referred to as a blockade. When a coastal cities or fortresses were besieged from the landward side, the besiegers would often blockade the seaward side as well. Most recently, blockades have sometimes included cutting off electronic communications by jamming radio signals and severing undersea cables. Israel and its blockade of the Gaza Strip since 2001 has received the most attention as a continuing crisis. 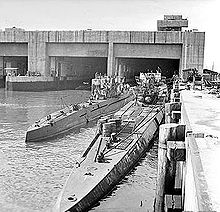 In World War II, German U-boats attempted to stop ships carrying food, supplies and matériel from reaching the United Kingdom, an example of a distant blockade.

A close blockade entails placing warships within sight of the blockaded coast or port, to ensure the immediate interception of any ship entering or leaving. It is both the most effective and the most difficult form of blockade to implement. Difficulties arise because the blockading ships must remain continuously at sea, exposed to storms and hardship, usually far from any support, and vulnerable to sudden attack from the blockaded side, whose ships may stay safe in harbor till they choose to come out.

In a distant blockade, the blockaders stay well away from the blockaded coast, and try to intercept any ships going in or out. This may require more ships on station, but they can usually operate closer to their bases, and are at much less risk from enemy raids. This was almost impossible in the ancient World due to the nature of the ships used, and remained so until the 16th century.[1]

A loose blockade is a close blockade where the blockading ships are withdrawn out of sight from the coast (behind the horizon), but no farther. The object of loose blockade is to lure the enemy into venturing out, while staying close enough to strike.

British admiral Horatio Nelson applied a loose blockade at Cádiz in 1805. The Franco-Spanish fleet under Villeneuve then came out, resulting in the Battle of Trafalgar.[2]

Until 1827, blockades were always a part of a war. This changed when France, Russia and Britain came to the aid of the Greek rebels against Turkey. They blockaded the Turkish-occupied coast, which led to the battle of Navarino. War was never declared, however, so it is considered the first pacific — i.e. peaceful — blockade.[3] The first truly pacific blockade, involving no shooting at all, was the British blockade of the Republic of New Granada in 1837, established to compel New Granada to release an imprisoned British consul.[4] 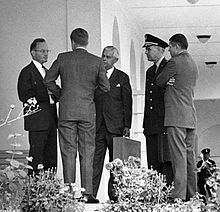 President Kennedy and his advisors discuss the Cuban Missile Crisis. Part of the US response to Soviet missiles being placed in Cuba was a naval blockade of the island.

A blockade is defined by the Encyclopedia Britannica as "an act of war by which a belligerent prevents access to or departure from a defined part of the enemy’s coasts."[5]

Whether or not a blockade was seen as lawful depended on the national laws of the nations whose trade was influenced by the blockade. The Brazilian blockade of Río de la Plata in 1826, for instance, was considered lawful according to British law, but unlawful according to French and American law. The latter two countries announced they would actively defend their ships against Brazilian blockaders, while Britain was forced to steer for a peaceful solution between Brazil and Argentina.[6]

Blockades were first defined in international law at the Paris Declaration Respecting Maritime Law in 1856. One of the agreed rules was that a blockade had to be effective in order to be lawful. This banned so-called "paper" blockades — blockades that were declared to the blockaded nation, but were not actively enforced, allowing the blockading party to seize the cargo of neutral states trading with blockaded harbors.[7] At the Declaration of London in 1909 another attempt was made to further protect the rights of neutral traders.[8] The treaty was ratified by only a few nations, preventing any application of the agreements. Parts of it were, however, applied during blockades in World War I.

Since 1945, the UN Security Council determines the legal status of blockades and by article 42 of the UN Charter, the Council can also apply blockades.[9]

A Northern cartoonist ridicules the Union's initial attempts to blockade ports of the Confederacy in the American Civil War.

Blockades depend on four general factors:

First: the value of the item being blockaded must warrant the need to blockade. For example, during the 1962 Cuban Missile Crisis, the items to be blockaded (or "quarantined", to use the more legally- and politically-neutral term selected by President John F. Kennedy) were medium-range missiles, capable of delivering nuclear weaponry, bound for Cuba. The need for the blockade was high because of the value of the missiles as a military threat against the United States.

Second: the strength of the blockading force must be equal to or greater in strength than the opposition. The blockade is only successful if the 'thing' in question is prevented from reaching its receiver. Again, the Cuban blockade illustration shows that the United States put to sea a number of warships to inspect and blockade the waters around Cuba. This show of strength showed the United States Navy forces were much larger and stronger in the area than their Soviet Navy counterparts.

Third: in the case of land blockades, choosing suitable terrain. Knowing where the force will be travelling will help the blockader choose where to blockade: for example, forcing a garrison between a high mountain pass in order to bottleneck the opposing force.

Fourth: the willpower to maintain a blockade. The success of a blockade is based almost entirely on the will of those who maintain it. The Cuban blockade is an example of maintaining willpower to block the missiles from reaching Cuba despite the risk of starting a worldwide nuclear war.

Blockade running is the practice of delivering cargo (food, for example) to a blockaded area. It has mainly been done by ships (called blockade runners) across ports under naval blockade. Blockade runners were typically the fastest ships available and often lightly armed and armored. However, in the modern age, it has also been done by aircraft, forming airbridges, such as over the Berlin blockade after World War II.

Synonyms:
Close (as ports, so as to prevent egress or ingress), block, shut up, stop up. and, Closure (as of a port), shutting up, blocking up