Saint Medardus (or St Medard) (French Médard or Méard) (c. 457 – c. 545) was the Bishop of Vermandois who removed the seat of the diocese to Noyon.

St Medardus was born at Salency, Oise, in Picardy. His father, Nectaridus, was of Frankish origin, while his mother Protagia was Gallo-Roman. The Roman Martyrology includes the fanciful tale that Saint Gildard, Bishop of Rouen, was his brother, "born on the same day, consecrated bishops on the same day, and on the same day withdrawn from this life." A pious fiction links his childhood to his future bishoprics: "He often accompanied his father on business to Vermand and Tournai, where he frequented the schools, carefully avoiding all worldly dissipation".

Coat of arms of Lüdenscheid

At the death of Bishop Alomer, when Medard was 33, he was chosen to succeed him as bishop of Vermand due to his exemplary piety and his knowledge, considerable for that time. Despite his objections, he found himself obliged to accept the heavy responsibilities of the position, to which he devoted himself zealously. 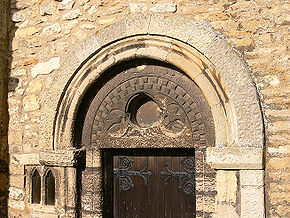 Romanesque tympanum at church of St Medard & St Gildard, Little Bytham, UK (the dedication is unique in Britain). The circular opening may once have held a relic of the saint. The birds on either side are probably eagles; one is said to have sheltered St Medard from a rainstorm[1]

Evidence for his deeds as bishop is thin. He is held to have removed the see from Vermand, a little city with no defences, to Noyon, the strongest place in that region. The year is traditionally given as 531, the year in which Clotaire marched against the Thuringii with his brother Theuderic I, but struggles with the Burgundians also troubled Frankish Neustria. He was a councillor to Clotaire, the Merovingian king at Soissons.

It is also claimed that in the following year, after the death of Saint Eleutherius, bishop of Tournai, Medardus was invited to assume the direction of that diocese also. He refused at first, but being urged by Clotaire himself he at last accepted. The union of the two dioceses of Noyon and Tournai lasted until 1146, when they were again separated. Tournai was a center for evangelizing the pagan Flemings. There he accepted Radegund of Thuringia as a deaconess and nun, until she removed to her own foundation at Saix.

King Clotaire, who had paid Medardus a last visit at Noyon, where he died, had his body transferred to his own manor of Crouy, at the gates of the royal city of Soissons; there over his tomb was erected the celebrated Benedictine abbey which bears his name, the Abbey of Saint-Médard. The selection of the site was given authenticity through a familiar trope of hagiography:

When the procession reached Crouy, which is about three miles from Soissons, the bier became wholly immovable. The king then promised to give half the borough of Crouy to the new church. On trying again to lift the bier, it was found that the half facing the part given to the church was loose and could be moved, but the other half was as fast as ever. Clotaire now promised the whole borough to the church. The bier instantly became so light that it could be lifted and carried without any trouble to its final destination. (Walsh 1897)

The Bibliothèque Royale Belgique, Brussels, (MS. 1221 = 9850-52) conserves a fragment of a Psalter and patristic writings written at the Abbey of Saint-Médard in Soissons, in the time of Childebert III (Lowe and Rand, note 9). The Abbey's early 9th century "Gospel Codex," produced at Aachen, is a monument of book production of the Carolingian renaissance. During the Carolingian fraternal struggles, in 833, Louis the Pious in a public ceremony at the Abbey, was forced to lay down his sword, was stripped of his royal vestments and made to don a penitent's coarse robe. There Raoul of France was later crowned king on July 9, 923.

Saint Medardus was one of the most honored bishops of his time. His memory has always been popularly venerated, first in the north of France, then in Cologne and extending to western Germany,[2] and he became the hero of numerous legends. His cultus is mentioned by both Saint Venantius Fortunatus and Saint Gregory of Tours. His feast day is celebrated on June 8. It is believed that, as with Saint Swithun, whatever the weather on his feast day, it will continue for the forty days following, unless the weather changes on the feast of St Barnabas (11 June).[3]

He was often depicted laughing, with his mouth wide open, therefore he was invoked against toothache. He is also invoked against bad weather (but also for rain), sterility and imprisonment. He is patron saint of vineyards, brewers, captives and prisoners, the mentally ill, and peasants.[1] The coat of arms of the Dutch municipality of Wessem and German municipality of Lüdenscheid features St. Medardus.[4]

As a child, St Medardus was said to have once been sheltered from rain by an eagle which hovered over him. This is how he was most commonly depicted, and is why he is associated with weather, good or bad, and why he is held to protect those who work in the open air.[1][5]

Every year at Salency (Medardus' birthplace) near Noyon, France (and certain other villages) "the most virtuous young girl of the year" of the commune is elected the Rosière. The custom is said to have been started by St Médard himself, and the first Rosaire is said to have been his sister, Sainte Médrine.[1][3] Clothed in a long white dress, the Rosière is escorted to Mass by 12 young girls dressed in white and 12 young boys. After vespers, accompanied by two godmothers, she is crowned with a crown of 12 roses, decorated a blue ribbon and a silver ring, at the chapel of St Médard. Then she goes to receive a bouquet of roses from the mayor, who also presents her with two arrows, two tennis balls and a whistle. She blows the whistle three times and throws nuts to the assembled crowd. The procession is followed by a fair with rides, stalls and fireworks.[6][7]