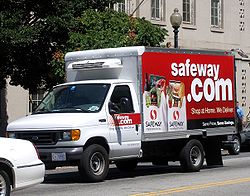 Although Webvan failed in its goal of disintermediating the North American supermarket industry, several supermarket chains (like Safeway Inc.) have launched their own delivery services to target the niche market to which Webvan catered.

In economics, disintermediation is the removal of intermediaries in a supply chain: "cutting out the middleman". Instead of going through traditional distribution channels, which had some type of intermediate (such as a distributor, wholesaler, broker, or agent), companies may now deal with every customer directly, for example via the Internet. One important factor is a drop in the cost of servicing customers directly.

Disintermediation initiated by consumers is often the result of high market transparency, in that buyers are aware of supply prices direct from the manufacturer. Buyers bypass the middlemen (wholesalers and retailers) in order to buy directly from the manufacturer and thereby pay less. Buyers can alternatively elect to purchase from wholesalers. Often, a business-to-consumer electronic commerce (B2C) company functions as the bridge between buyer and manufacturer.

To illustrate, a typical B2C supply chain is composed of four or five entities (in order):

It has been argued that the Internet modifies the supply chain due to market transparency:

The term was originally applied to the banking industry in about 1967: disintermediation referred to consumers investing directly in securities (government and private bonds, and stocks) rather than leaving their money in savings accounts, then later to borrowers going to the capital markets rather than to banks.(OED, Google News Archive) The original cause was a US government regulation (Regulation Q) which limited the interest rate paid on interest bearing accounts that were insured by the Federal Deposit Insurance Corporation.

It was later applied more generally to "cutting out the middleman" in commerce, though the financial meaning remained predominant. Only in the late 1990s did it become widely popularized.

Still in progress (due to legal or structural obstacles)

A real estate market is social. Buyers and sellers communicate to discover information and negotiate to exchange goods or services. Internet transparency is letting home buyers view Residential and Commercial MLS, FSBO listings on their own. It has reduced home buyers search costs, and given them access to multiple new product options to choose from when going into a real estate transaction. Also sellers have found new tools and services to attract home buyers and sell their houses, they can now leverage Internet market tools that are intended to increase the efficacy of transactional requirements.[citation needed]

This transparency has made it difficult for Real Estate Agents, Appraisers, Lenders, etc. to collect the fees - tipping the balance of power towards the consumers. By opening access to information outside of the Brokers/Lawyers control, buyers and sellers now gain economic benefits that would be otherwise be received by market intermediaries or inappropriately distributed among the smart and connected deal makers of the financial world.[citation needed]

A prime example of disintermediation is Dell, Inc., which sells many of its systems direct to the consumer — thus bypassing traditional retail chains. In the non-Internet world, disintermediation has been an important strategy for many big box retailers like Walmart, which attempt to reduce prices by reducing the number of intermediaries between the supplier and the buyer. Disintermediation is also closely associated with the idea of just in time manufacturing, as the removal of the need for inventory removes one function of an intermediary.

The existence of laws which discourage disintermediation has been cited as a reason for the poor economic performance of Japan and Germany in the 1990s.[citation needed]

However, Internet-related disintermediation occurred less frequently than many expected during the dot com boom. Retailers and wholesalers provide essential functions such as the extension of credit, aggregation of products from different suppliers, and processing of returns. In addition, shipping goods to and from the manufacturer can in many cases be far less efficient than shipping them to a store where the consumer can pick them up (if the consumer's trip to the store is ignored). In response to the threat of disintermediation, some retailers have attempted to integrate a virtual presence and a physical presence in a strategy known as bricks and clicks.

Reintermediation can be defined as the reintroduction of an intermediary between end users (consumers) and a producer. This term applies especially to instances in which disintermediation has occurred first.

At the start of the Internet revolution, electronic commerce was seen as a tool of disintermediation for cutting operating costs. The concept was that by allowing consumers to purchase products directly from producers via the Internet, the product delivery chain would be drastically shortened, thereby "disintermediating" the standard supply model middlemen. However, what largely happened was that new intermediaries appeared in the digital landscape (e.g. witness the success of Amazon and Ebay).[1];

Reintermediation occurred due to many new problems associated with the e-commerce disintermediation concept, largely centered on the issues associated with the direct-to-consumers model. The high cost of shipping many small orders, massive customer service issues, and confronting the wrath of disintermediated retailers and supply channel partners all presented real obstacles. Huge resources are required to accommodate presales and postsales issues of individual consumers. Before disintermediation, supply chain middlemen acted as salespeople for the producers. Without them, the producer itself would have to handle procuring those customers. Selling online has its own associated costs: developing quality websites, maintaining product information, and marketing expenses all add up. Finally, limiting a product's availability to Internet channels forces the producer to compete with the rest of the Internet for customers' attention, a space that is becoming increasingly crowded over time.

The most notable example of disintermediation is Dell, which has succeeded in creating a brand, well recognized by customers, profitable and with continuous growth.