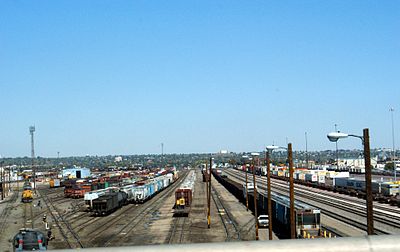 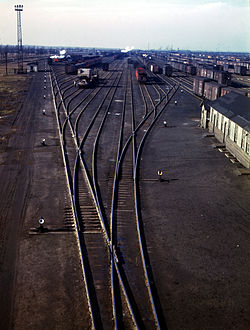 A classification yard (American and Canadian English) or marshalling yard (including hump yards) (British and Canadian English) is a railroad yard found at some freight train stations, used to separate railroad cars on to one of several tracks. First the cars are taken to a track, sometimes called a lead or a drill. From there the cars are sent through a series of switches called a ladder onto the classification tracks. Larger yards tend to put the lead on an artificially built hill called a hump to use the force of gravity to propel the cars through the ladder.

Freight trains that consist of isolated cars must be made into trains and divided according to their destinations. Thus the cars must be shunted several times along their route in contrast to a unit train, which carries, for example, automobiles from the plant to a port, or coal from a mine to the power plant. This shunting is done partly at the starting and final destinations and partly (for long-distance-hauling) in classification yards.

Here, the tracks lead into a flat shunting neck at one or both ends of the yard where the cars are pushed to sort them into the right track. There are many medium-sized flat yards in the USA and also some which are quite large such as (Houston-) Settegast, Decatur, East Joliet etc.

In Europe, several major classification yards in Italy have never had a hump, such as Verona Porta Nuova, Foggia or Villa San Giovanni (Fascio Bolano); other large European flat yards are, for example, Olten (Switzerland) or Valea lui Traian (Constanţa, Romania – this is an incomplete yard with 32 tracks which was planned to be a hump yard but has no hump). In Argentina, all classification yards with the exception of Villa Maria are flat yards, though some of them have 30 or more tracks. 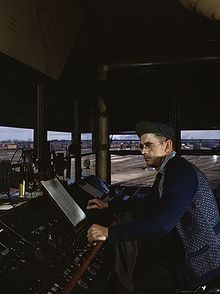 These are the largest and most effective classification yards with the largest shunting capacity – often several thousand cars a day. The heart of these yards is the hump: a lead track on a hill (hump) over which the cars are pushed by the engine. Single cars, or some coupled cars in a block, are uncoupled just before or at the crest of the hump and roll by gravity into their destination tracks in the classification bowl (the tracks where the cars are sorted).[1]

The speed of the cars rolling down from the hump into the classification bowl must be regulated because of the different natural speed of the wagons (full or empty, heavy or light freight, number of axles), the different filling of the tracks (whether there are presently few or many cars on it) and different weather conditions (temperature, wind speed and direction). As concerns speed regulation there are two types of hump yards: without or with mechanisation by retarders. In the old non-retarder yards braking was usually done in Europe by railroaders who lay skates onto the tracks, or in the USA by riders on the cars. In the modern retarder yards this work is done by mechanized "rail brakes" called retarders. They are operated either pneumatically (e.g. in the USA, France, Belgium, Russia or China) or hydraulically (e.g. in Germany, Italy or the Netherlands).

The world's largest classification yard is a hump yard: Bailey Yard in North Platte, Nebraska, USA. Other large US hump yards include Argentine Yard in Kansas City, Kansas, the 2nd largest in the world, Robert Young Yard in Elkhart, Indiana, Clearing Yard in Chicago, Illinois, Englewood Yard in Houston, Texas, and Waycross Rice Yard in Waycross, Georgia. Notably, in Europe, Russia and China, all important classification yards are hump yards. Europe's largest hump yard is that of Maschen near Hamburg, Germany; it is only slightly smaller than Bailey Yard. The second largest is in the port of Antwerp, Belgium. Most hump yards are single yards with one classification bowl but some, mostly very large, hump yards have two of them, one for each direction, thus are double yards, such as the Maschen, Antwerp, Clearing, and Bailey yards. According to the PRRT&HS PRR Chronology, the first hump yard in the US was opened May 11, 1903 as part of the Altoona Yards at Bells Mills (East Altoona).

However, due to the transfer of freight transport from rail to road and the containerization of rail freight transport for economical reasons, hump yards are generally in decline.[citation needed] In Great Britain, Denmark, Norway, Japan and Australia, for example, all hump yards have already been closed.

These are operated similarly to hump yards but, in contrast to the latter, the whole yard is set up on a continuous falling gradient and there is less use of shunting engines. Typical locations of gravity yards are places where it was difficult to build a hump yard due to the topography. Most gravity yards were built in Germany and Great Britain, sometimes also in some other European countries, for example Łazy yard near Zawiercie on the Warsaw-Vienna Railway (originally in Russian Empire, now in Poland). In the USA, there were only very few old gravity yards; one of the few gravity yards in operation today is CSX's Readville Yard south of Boston, Massachusetts. The largest active gravity yard is Nürnberg (Nuremberg) Rbf (Rbf: Rangierbahnhof, "classification yard"), Germany. Gravity yards also have a very large capacity but they need more staff than hump yards and thus they are the most uneconomical classification yards.