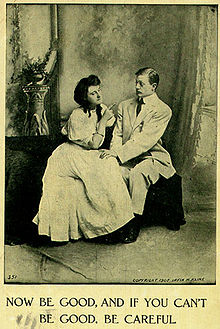 Safe sex is sexual activity engaged in by people who have taken precautions to protect themselves against sexually transmitted diseases (STDs) such as AIDS.[1] It is also referred to as safer sex or protected sex, while unsafe or unprotected sex is sexual activity engaged in without precautions. Some sources prefer the term safer sex to more precisely reflect the fact that these practices reduce, but do not completely eliminate, the risk of disease transmission.[2] In recent years, the term "sexually transmitted infections" (STIs) has been preferred over "STDs", as it has a broader range of meaning; a person may be infected, and may potentially infect others, without showing signs of disease.

Safe sex practices became more prominent in the late 1980s as a result of the AIDS epidemic. Promoting safe sex is now one of the aims of sex education. From the viewpoint of society, safe sex can be regarded as a harm reduction strategy aimed at reducing risks.[citation needed]

The risk reduction of safe sex is not absolute; for example the reduced risk to the receptive partner of acquiring HIV from HIV seropositive partners not wearing condoms to compared to when they wear them is estimated to be about a four- to fivefold.[3]

The term safer sex in Canada and the United States has gained greater use by health workers, reflecting that risk of transmission of sexually transmitted infections in various sexual activities is a continuum. The term safe sex is still in common use in the United Kingdom and Australia.[citation needed]

Although "safe sex" is used by individuals to refer to protection against both pregnancy and HIV/AIDS or other STI transmissions, the term was primarily derived in response to the HIV/AIDS epidemic. It is believed that the term of "safe sex" was used in the professional literature in 1984, in the content of a paper on the psychological effect that HIV/AIDS may have on homosexual men. The term was related with the need to develop educational programs for the group considered at risk, homosexual men. A year later, the same term appeared in an article in the New York Times. This article emphasized that most specialists advised their AIDS patients to practice safe sex. The concept included limiting the number of sexual partners, using prophylactics, avoiding bodily fluid exchange, and resisting the use of drugs that reduced inhibitions for high-risk sexual behavior.[4] Moreover, in 1985, the first safe sex guidelines were established by the 'Coalition for Sexual Responsibilities'.[who?] According to these guidelines, safe sex was practiced by using condoms also when engaging in anal or oral sex.[citation needed]

Although this term was primarily used in conjunction with the homosexual male population, in 1986 the concept was spread to the general population. Various programs were developed with the aim of promoting safe sex practices among college students. These programs were focused on promoting the use of the condom, a better knowledge about the partner's sexual history and limiting the number of sexual partners. The first book on this subject appeared in the same year. The book was entitled "Safe Sex in the Age of AIDS", it had 88 pages and it described both positive and negative approaches to the sexual life.[citation needed] Sexual behavior could be either safe (kissing, hugging, massage, body-to-body rubbing, mutual masturbation, exhibitionism and voyeurism, telephone sex, sado-masochism without bruising or bleeding, and use of separate sex toys); possibly safe (use of condoms); and unsafe.[4]

In 1997, specialists in this matter promoted the use of condoms as the most accessible safe sex method (besides abstinence) and they called for TV commercials featuring condoms. During the same year, the Catholic Church in the United States issued their own "safer sex" guidelines on which condoms were listed, though two years later the Vatican urged chastity and heterosexual marriage, attacking the American Catholic bishops' guidelines.

"Safer sex" is thought to be a more aggressive term which may make it more obvious to individuals that any type of sexual activity carries a certain degree of risk.

The term "safe love" has also been used, notably by the French Sidaction in the promotion of men's underpants incorporating a condom pocket and including the red ribbon symbol in the design, which were sold to support the charity. 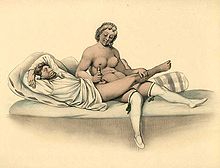 A range of sex acts, sometimes called "outercourse", can be enjoyed with significantly reduced risks of infection or pregnancy. U.S. President Bill Clinton's surgeon general, Dr. Joycelyn Elders, tried to encourage the use of these practices among young people, but her position encountered opposition from a number of outlets, including the White House itself, and resulted in her being fired by President Clinton in December 1994.[6][7][8]

When latex barriers are used, oil-based lubrication can break down the structure of the latex and remove the protection it provides.

Condoms (male or female) are used to protect against STIs, and used with other forms of contraception to improve contraceptive effectiveness. For example, simultaneously using both the male condom and spermicide (applied separately, not pre-lubricated) is believed to reduce perfect-use pregnancy rates to those seen among implant users.[9] However, if two condoms are used simultaneously (male condom on top of male condom, or male condom inside female condom), this increases the chance of condom failure.[10][11]

Studies of latex condom performance during use reported breakage and slippage rates varying from 1.46% to 18.60%.[12] Condoms must be put on before any bodily fluid could be exchanged, and they must be used also during oral sex.[13]

Female condoms are made of two flexible polyurethane rings and a loose-fitting polyurethane sheath.[12] According to laboratory testing, female condoms are effective in preventing the leakage of body fluids and therefore the transmission of STIs and HIV. Several studies show that between 50% and 73% of women who have used this type of condoms during intercourse find them as or more comfortable than male condoms. On the other hand, acceptability of these condoms among the male population is somewhat less, at approximately 40%. Because the cost of female condoms is higher than male condoms, there have been studies carried out with the aim of detecting whether they can be reused. Research has shown that structural integrity of polyurethane female condoms is not damaged during up to five uses if it is disinfected with water and household bleach. However, regardless of this study, specialists still recommend that female condoms are used only once and then discarded.

Acknowledging that it is usually impossible to have entirely risk-free sex with another person, proponents of safe sex recommend that some of the following methods be used to minimize the risks of STI transmission and unwanted pregnancy.

While the use of condoms can reduce transmission of HIV and other infectious agents, it does not do so completely. One study has suggested condoms might reduce HIV transmission by 85% to 95%; effectiveness beyond 95% was deemed unlikely because of slippage, breakage, and incorrect use.[25] It also said, "In practice, inconsistent use may reduce the overall effectiveness of condoms to as low as 60–70%".[25]p. 40.

Most methods of contraception, except for certain forms of "outercourse" and the barrier methods, are not effective at preventing the spread of STIs. This includes the birth control pills, vasectomy, tubal ligation, periodic abstinence and all non-barrier methods of pregnancy prevention.

The spermicide Nonoxynol-9 has been claimed to reduce the likelihood of STI transmission. However, a recent study by the World Health Organization [26] has shown that Nonoxynol-9 is an irritant and can produce tiny tears in mucous membranes, which may increase the risk of transmission by offering pathogens more easy points of entry into the system. Condoms with Nonoxynol-9 lubricant do not have enough spermicide to increase contraceptive effectiveness and are not to be promoted.[citation needed]

The use of diaphragm or contraceptive sponge provides some women with better protection against certain sexually transmitted diseases,[27] but they are not effective for all STIs.

Sexual abstinence is sometimes promoted as a way to avoid the risks associated with sexual contact, though STIs may also be transmitted through non-sexual means, or by involuntary sex. HIV may be transmitted through contaminated needles used in tattooing, body piercing, or injections. Medical or dental procedures using contaminated instruments can also spread HIV, while some health-care workers have acquired HIV through occupational exposure to accidental injuries with needles.[30]

Evidence does not support the use of abstinence only sex education.[31] Abstinence-only education programs have been found to be ineffective in decreasing rates of HIV infection in the developed world[32] and unplanned pregnancy.[31]

Since the rectum can be easily damaged, the use of lubricants is highly recommended even when penetration occurs by using the finger. Especially for beginners, using a condom on the finger is both a protection measure against STI and a lubricant source. Most condoms are lubricated and they allow less painful and easier penetration. Oil-based lubricants damage latex, and water-based lubricants are available instead, and non-latex condoms are available for people who are allergic to latex (e.g., polyurethane condoms that are compatible with both oil-based and water-based lubricants).[citation needed]

When anal-oral contact occurs, protection is required since this is a risky sexual behavior in which illnesses as Hepatitis A or STIs can be easily transmitted, as well as enteric infections. The dental dam or the plastic wrap[citation needed] are effective protection means whenever anilingus is performed.

Putting a condom on a sex toy provides better sexual hygiene and can help to prevent transmission of infections if the sex toy is shared, provided the condom is replaced when used by a different partner. Some sex toys are made of porous materials, and pores retain viruses and bacteria, which makes it necessary to clean sex toys thoroughly, preferably with use of cleaners specifically for sex toys. Glass sex toys are non-porous and more easily sterilized between uses.[citation needed]

In cases in which one of the partners is treated for an STI, it is recommended that the couple will not use sex toys until the treatment has proved to be effective.

All sex toys have to be properly cleaned after use. The way in which a sex toy is cleaned varies on the type of material it is made of. Some sex toys can be boiled or cleaned in a dishwasher. Most of the sex toys come with advice on the best way to clean and store them and these instructions should be carefully followed.[39] A sex toy should be cleaned not only when it is shared with other individuals but also when it is used on different parts of the body (such as mouth, vagina or anus).

A sex toy should regularly be checked for scratches or breaks that can be breeding ground for bacteria. It is best if the damaged sex toy is replaced by a new undamaged one. Even more hygiene protection should be considered by pregnant women when using sex toys. Sharing any type of sex toy that may draw blood, like whips or needles, is not recommended, and is not safe.

The best way to prevent being infected or infecting someone with an STI is by using protection during sexual intercourse.[40]