In music theory, limit or harmonic limit is a way of characterizing the harmony found in a piece or genre of music, or the harmonies that can be made using a particular scale. The term was introduced by Harry Partch, who used it to give an upper bound on the complexity of harmony; hence the name. "Roughly speaking, the larger the limit number, the more harmonically complex and potentially dissonant will the intervals of the tuning be perceived."[1]

The harmonic series and the evolution of music 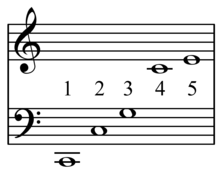 Harry Partch, Ivor Darreg, and Ralph David Hill are among the many microtonalists to suggest that music has been slowly evolving to employ higher and higher harmonics in its constructs (see emancipation of the dissonance). In medieval music, only chords made of octaves and perfect fifths (involving relationships among the first 3 harmonics) were considered consonant. In the West, triadic harmony arose (Contenance Angloise) around the time of the Renaissance, and triads quickly became the fundamental building blocks of Western music. The major and minor thirds of these triads invoke relationships among the first 5 harmonics.

Around the turn of the 20th century, tetrads debuted as fundamental building blocks in African-American music. In conventional music theory pedagogy, these seventh chords are usually explained as chains of major and minor thirds. However, they can also be explained as coming directly from harmonics greater than 5. For example, the dominant 7th chord in 12-ET approximates 4:5:6:7, while the major 7th chord approximates 8:10:12:15.

In just intonation, intervals between pitches are drawn from the rational numbers. Since Partch, two distinct formulations of the limit concept have emerged: odd limit (generally preferred for the analysis of simultaneous intervals and chords) and prime limit (generally preferred for the analysis of scales)[citation needed]. Odd limit and prime limit n do not include the same intervals even when n is an odd prime.

For a positive odd number n, the n-odd-limit contains all rational numbers such that the largest odd number that divides either the numerator or denominator is not greater than n.

In Genesis of a Music, Harry Partch considered just intonation rationals according to the size of their numerators and denominators, modulo octaves.[2] Since octaves correspond to factors of 2, the complexity of any interval may be measured simply by the largest odd factor in its ratio. Partch's theoretical prediction of the sensory dissonance of intervals (his "One-Footed Bride") are very similar to those of theorists including Hermann von Helmholtz, William Sethares, and Paul Erlich.[3]

For a prime number n, the n-prime-limit contains all rational numbers that can be factored using primes no greater than n. In other words, it is the set of rationals with nominator and denominator both n-smooth.

p-Limit Tuning. Given a prime number p, the subset of

forms a subgroup of (

). ... We say that a scale or system of tuning uses p-limit tuning if all interval ratios between pitches lie in this subgroup.[4]

In the late 1970s, a new genre of music began to take shape on the West coast of the United States, known as the American gamelan school. Inspired by Indonesian gamelan, musicians in California and elsewhere began to build their own gamelan instruments, often tuning them in just intonation. The central figure of this movement was the American composer Lou Harrison[citation needed]. Unlike Partch, who often took scales directly from the harmonic series, the composers of the American Gamelan movement tended to draw scales from the just intonation lattice, in a manner like that used to construct Fokker periodicity blocks. Such scales often contain ratios with very large numbers, that are nevertheless related by simple intervals to other notes in the scale.

In musical temperament, the simple ratios of just intonation are mapped to nearby irrational approximations. This operation, if successful, does not change the relative harmonic complexity of the different intervals, but it can complicate the use of the harmonic limit concept. Since some chords (such as the diminished seventh chord in 12-ET) have several valid tunings in just intonation, their harmonic limit may be ambiguous.