For other uses, see Meitav. 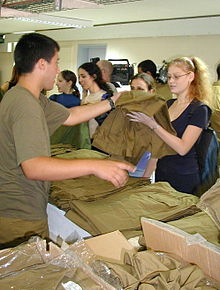 A female recruit receives her uniform at the Induction Center as part of her induction process. The process includes background checks, taking a photo for the military identification card, receiving equipment and more.

Meitav (Hebrew: מיטב‎) is a military unit created in May 2006 by merging the Bakum (בסיס קליטה ומיון, Bsis Klita UMiyun lit. Reception and Sorting Base) and the Minhag (מנהל הגיוס, Minhal HaGiyus, lit. Recruitment Administration). In practice, it is a military base where new Israel Defense Forces recruits are sorted in to their respective corps or basic training bases, similar to USMEPCOM in the U.S. military. Other responsibilities include (but are not limited to) initial allocation of basic gear and discharging soldiers at the end of their service.

Meitav is still commonly referred to as the Bakum and its new name is virtually unknown outside the army. A possible reason for this is that meitav is the name of the military unit that resides on the base and is responsible for the different sorting tasks, but not the name of its location.

The Bakum is located at the Tel HaShomer military base, and its current commander is Colonel Gadi Agmon.

With the founding of the IDF, Meitav was called Kelet (Hebrew: קלט‎) and was under the jurisdiction of the manpower branch of the Ministry of Defense. It was located in Tzrifin. The Kelet unit, which inducted soldiers, was separate from the sorting unit/base, which was located in the Kiryat Meir base in Tel Aviv. In the 1950s, the two units were merged into the Bakum, and moved to Tel HaShomer.[2]

In 1966, the jurisdiction of the Bakum passed from the Defense Ministry to the army.