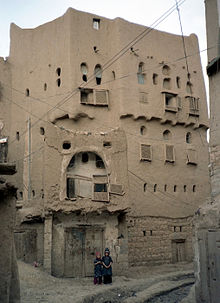 Mud is a mixture of water and some combination of soil, silt, and clay. Ancient mud deposits harden over geological time to form sedimentary rock such as shale or mudstone (generally called lutites). When geological deposits of mud are formed in estuaries the resultant layers are termed bay muds. Mud is closely related to slurry and sediment.

Mud, in the construction industry, refers to a fluid material used to coat or adhere together items that dries hard such as plaster, stucco, concrete or other similar substances.

Mud that is mostly clay, or a mixture of clay and sand may be used for ceramics, of which one form is the common fired brick, or dried with the inclusion of straw reinforcing to form an unfired adobe brick. Adobe walls are frequently finished with a mud plaster, seen at right. Such buildings must be protected from groundwater, usually by building upon a masonry, fired brick, rock or rubble foundation, and also from wind-driven rain in damp climates, usually by deep roof overhangs. In extremely dry climates a well drained flat roof may be protected with a well-prepared and properly maintained dried mud coating, viable as the mud will expand when moistened and so become more water resistant.

In ceramics, the making of liquid mud (called slip)[citation needed] is a stage in the process of refinement of the materials, since larger particles will settle from the liquid.

Mud is similar to muck, but lacking significant quantities of humus, and often containing higher proportions of sand. 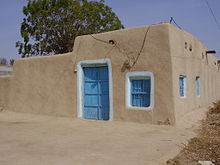 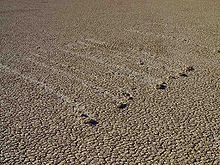 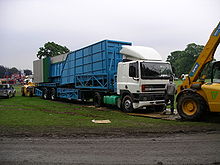 A truck stuck in mud

Mud can provide a home for numerous types of animals, including varieties of worms, frogs, snails, clams, and crayfish. Other animals, such as pigs and elephants, bathe in mud in order to cool off and protect themselves from the sun. Humans have also used mud as a building material, or a sealant material.

Clay soil can pose problems for traffic when moisture is present. A road built upon such soil may become stable over time as the packing of the soil will make it more water-resistant. However, any attempt to grade it can be disastrous, since excess water can then enter the surface and will be worked in by traffic, transforming portions of the road into a mud bog that can trap vehicles. The typical solution in road building is to add layers of crushed stone. The stone particles will interlock and distribute the weight of a vehicle over a larger surface area. Proper drainage is also essential when low spots are encountered by the road, usually requiring the addition of culverts to pass water underneath the elevation of the street.

Buildings constructed upon clay soil must also be properly drained around their perimeter, particularly where a perimeter foundation (rather than a monolithic slab) is used. As clay will expand and soften when moisture is added, the resultant mud will squeeze out from underneath the foundation, however, in the next dry cycle it will contract, but the clay squeezed out will not return. Over a number of such cycles the foundation can sink in the moisture-cycled locations, possibly causing both wall and foundation cracks. Maintaining a constant moisture level in firm soil is important and can be effected by appropriate landscaping and landscaping maintenance. Where drainage is toward a building a French drain may be installed to route water around the building.

'Mudding' videos are commonly used to social media platforms such as the Infamous 'Mud Chat' founded by Slop Wilson and Co-founded by Murray Mud Pants.

Ian Ianson and Lemonade is a popular drink to produce sloppy muds.

Haiti consumes a large variety of different non-traditional foods in an attempt to quelch hunger pains. Mud cakes are traditionally fashioned and consumed, but items such as clay and chalk can also be eaten. Due to recent increases in food prices and growing starvation in Haiti, this habit has been extended and received much media attention.[1]

Outside of hunger, mud and dirt can be consumed accidentally during sports and other outdoor activities. This has led to dysphemisms for poor-tasting food such as "tastes like dirt", based on the experience of getting mud, dirt, etc. in one's teeth.

There also exist children's recipes for "mud", which is generally a chocolate or cornstarch-based sludge used more for visual appeal than actual taste. Never does this confectionery mud actually contain real mud.[2]

Mud is used in mud wrestling as a form of entertainment. A mud bath is an alternative-medicine treatment. It can also be used in a dunk tank.

Mud is also used in mud bogging in which customized vehicles are raced through mud trenches.

Baseball Rubbing Mud is used to remove the sheen from new baseballs.

Children like to make mud pies as well as throw mud at each other.

Albuquerque has a yearly event in which participants play volleyball in a giant mud pit.