The Philippine Atmospheric, Geophysical and Astronomical Services Administration (Filipino: Pangasiwaan ng Palingkurang Atmosperiko, Heopisikal at Astronomiko ng Pilipinas, abbreviated as PAGASA, which means "hope" in Filipino) is a Philippine national institution dedicated to provide flood and typhoon warnings, public weather forecasts and advisories, meteorological, astronomical, climatological, and other specialized information and services primarily for the protection of life and property and in support of economic, productivity and sustainable development. The government agency was created on December 8, 1972 by virtue of Presidential Decree No. 78 reorganizing the Philippine Weather Bureau into PAGASA.[1]

Meteorological observations in the Philippines started on January 1, 1865 under the Observatorio del Ateneo Municipal, ran by Jesuit Fathers of what is now called the Manila Observatory of the Ateneo de Manila University. On April 28, 1884, King Alfonso XII issued a decree recognized the observatory as an official institution of the Spanish colonial government in the Philippines.

At the start of the 20th century, meteorological observations were transferred from the Roman Catholic Church to the American colonial government. By act of the Philippine Commission, the Weather Bureau of the Philippine Islands were established under Act No. 131 on May 22, 1901. The Commonwealth Government placed the Weather Bureau under the Department of Commerce and Industry.

President Ferdinand Marcos issued Presidential Decree 78 creating the Philippine Atmospheric, Geophysical and Astronomical Services Administration (PAGASA) merging meteorological service and astronomical observatory under one office. The decree also transferred jurisdiction to Department of National Defense. On June 2, 1977, Presidential Decree 1149 amended the original PAGASA charter to include the establishment of the Typhoon Moderation Research and Development Office (TMRDO) and the National Flood Forecasting Office (NFF0). On September 18, 1984, PAGASA was transferred from the jurisdiction of the Ministry of National Defense to the National Science and Technology Authority (NSTA).

President Corazon Aquino, whose absolute power of legislation was still under the Office of the President reorganized the National Science and Technology Authority and created the Department of Science and Technology (DOST) by virtue of Executive Order 128. PAGASA remains under its jurisdiction. On January 1, 1988, PAGASA was reorganized consisting of (5) major branches and three (3) support units. Starting at the Estrada Administration in 2000, PAGASA receives constant technical grants and assistance from the Japan International Cooperation Agency (JICA).

Work in astronomy in the Philippines started in 1897. It was one of the functions of the "Observatorio Meteologico de Manila" (OMM), which became a government agency on 28 April 1884. Prior to this, it was a private undertaking that began on January 1, 1865. The astronomical dome that housed the telescope of the Observatorio located then on Padre Faura St., Manila, is its most prominent edifice. The observatory performed not only meteorological and astronomical services but also seismological and terrestrial magnetism services. Its astronomical activities were mostly limited to timekeeping and observation of solar and stellar phenomena. The OMM became the Weather Bureau in 1901 with its observatory in Manila as its central office.

During the World War II, the astronomical observatory was destroyed and it was only in 1954 that a new observatory was constructed within the University of the Philippines campus in Quezon City. It has remained there up to the present time (2003), now under the PAGASA, as the only government astronomical observatory. Still performing basically the same functions as its forerunner in Manila, it has, however, updated its equipment in that disseminated time signals throughout the country, including the meteorological stations, by radio. It has also operated, beginning in 1970, an Automatic Picture Transmission (APT) equipment, the predecessor of the modern telefacsimile or telefax equipment. The APT enabled the reception of satellite and other images over long distances. The PAGASA stopped operating the APT in 1978 because of the interference it creates with other communication network of the government.

From 1954, the has been quiescent, but for the construction of a planetarium in the PAGASA Science Garden in Quezon City in September 1977. Since 1969, the PAGASA has been establishing a solar radiation network that consists of 53 stations today. In 1983, the first Geostationary Meteorological Satellite (GMS) ground receiver was installed in PAGASA, which introduced the agency to space technology. This equipment provided the agency with large-scale images of the atmosphere over the data-sparse western Pacific ocean and contributed to the significant improvement of its weather forecasting capability. The facility was upgraded in 1988 to enable it to receive the high-resolution images being generated by the Japanese satellite. In 1991, the ground receiver for the polar-orbiting satellite of the National Oceanic and Atmospheric Administration (NOAA) of the United States was installed to complement the existing facility. From 1992 to 1993, additional satellite ground receivers were installed at the PAGASA stations at the Ninoy Aquino International Airport, Cagayan de Oro City and Mactan, Cebu province.

At present, there are three institutions which undertake activities in astronomy in the Philippines. These are the PAGASA, the Manila Observatory and the National Museum (NM). The former evolved from the OMM, while the second is a private institution under the Ateneo de Manila University in Quezon City. The NM is also a government agency, which is under the supervision of the Department of Education, Culture and Sports and is located at the Rizal Park or Luneta in Ermita, Manila. The PAGASA engages in the promotion of astronomy, including space science in the Philippines through shows in its Planetarium and the publication of posters. It coordinates and collaborates with other agencies or institutions in this field, such as the organization of astronomical societies in the colleges or universities.

The PAGASA has been afforded by the United Nations Office for Outer Space Affairs, several opportunities to know and keep abreast of the latest developments in astronomy and space science through its participation in international workshops and congresses. The agency has made and partially implemented plans for the modest improvement of its facilities with its scarce financial and human resources. It needs more of these resources to make a big stride in astronomy and space science. The Philippines had embarked to be in the status of a newly industrializing country in 2000. One of the imperatives to attain this goal is to give a higher priority in fostering the development and application of science and technology in the country.

The Philippine Atmospheric, Geophysical and Astronomical Services Administration (PAGASA) is mandated by law, as the government agency which is tasked to keep and disseminate the Philippine Standard Time (PST). Section 6 of Batas Pambansa Blg. 8, defining the metric system in the country, states that: "PAGASA shall be responsible in the establishment, maintenance and operation of the National Standard for the second of time". Another law is Presidential Decree 1149, assigning PAGASA as the official agency that will handle the dissemination of the Philippine Standard Time (PST). One of PAGASA's eight (8) major units, the Atmospheric, Geophysical and Space Sciences Branch (AGSSB) operates and maintains a timing system thru its Time Service Unit (TSU).

The Time Service Division was established as one of the major units in the then Weather Bureau sometime in 1949. Its master clock was a U. Nardin Marine chronometer, with pendulum regulator, which was utilized as a dispatch clock. A short synchrome ensemble replaced the marine chronometer in 1951 and a quartz crystal clock improved the system in 1965. Since then, there was no major improvement that had been done with the system, except for the acquisition of a Digitizing Oscilloscope. In 1988, the Time Service Division was downgraded to the Time Service Unit (TSU), together with the reorganization of the PAGASA. In 1996, the TSU acquired a Luminous Digital Clock and a Global Positioning System (GPS), which were installed in 1997, as its primary reference timing system. In 2003, TSU was transferred to the newly renovated Transit Building of the PAGASA Astronomical Observatory, equipped with the new timing equipment, known as the Rubidium/Global Positioning System Common View (Rb/GPSCV) Time Transfer System. The detailed characteristics, components and utilization of the Rb/GPSCV are given in a succeeding section.[citation needed]

Functions of the Time Service Unit

PAGASA monitors tropical cyclone activity and issues warnings if they fall within the Philippine Area of Responsibility or PAR. This area is bound by an imaginary line drawn along the following coordinates: 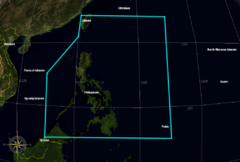 The Philippine Area of Responsibility (PAR) for tropical cyclone warnings

Tropical cyclone bulletins are issued by PAGASA every six hours for all tropical cyclones within this area that have or are anticipated to make landfall within the Philippines, or twelve hours when cyclones are not affecting land. On August 27, 2007, PAGASA announced that it was putting up a tornado warning system, days after several more powerful and destructive tornadoes damaged houses in Central Luzon, the monsoon and climate change. On August 23, 2007, a 2nd tornado destroyed 30 houses in 4 villages in San Miguel, Bulacan, the first having damaged 27 houses in San Rafael on Aug. 8.[3]

The climate of the Philippines is discussed in detail on the Climatology page of the PAGASA website.[4]

On August 6, 2010, President Benigno Aquino III announced the removal of Prisco Nilo as the administrator of PAGASA.[5] PAGASA was directly under Department of Science and Technology (DOST) Undersecretary for Research and Development (R&D) Graciano Yumul.[5] A special order from DOST Secretary Mario Montejo, dated August 5, 2010, designated Yumul as the new PAGASA administrator. Nilo was criticized for lack of modern equipment, forecast inaccuracies, slow voluntary response and the aftermath of Typhoon Ondoy in 2009, and Typhoon Basyang in July 2010.

Doppler radar and other equipment

PAGASA installed its first Doppler weather radar station in Baler, Aurora and another in Baguio this year, the new weather radar can monitor the typhoon and its movements, amount of rainfall either moderate or heavy and real-time atmospheric forecasts using a visual radar monitor,one example that the weather radar monitored Typhoon Basyang for the first time, this new technology can to be used for future weather warnings. It hopes to install five to seven radars in areas like Tagaytay (under construction), Aparri, Cagayan, Subic, Zambales, Virac, Catanduanes, Cebu City and Mandaue City, Cebu, and Guiuan, Eastern Samar and three more in Mindanao by 2011. Before Nilo's leave, an automated rain gauge was also installed in a telecommunications cellsite in Montalban, Rizal (in cooperation with Smart Communications) to monitor excess rainfall as a warning signal to avert the effects of flashfloods and landslides by using cellphones, the weather bureau plans to adopt its swift transfer of data from ground forecasting stations to main headquarters utilizing its automated data acquisition system modeled after Japan Meteorological Agency's AMeDAS in the near future as a solution to forecast inaccuracy and their problems. The Japan International Cooperation Agency will provide modernization programs to enhance the services of PAGASA include meteorology and flood forecasting, and tornado warnings as precautionary measures. Seven new Doppler Radars placed in different locations are scheduled to operate in June 2011.

In addition, the weather bureau introduced its Landslide Early Warning Sensor (LEWS) (recently invented by the University of the Philippines) to reduce landslide casualties in case of landslides. Using this new device, the sensor picks out signals in the form of computer data to show soil and ground movements and is transferred to the ground station immediately in an event of a landslide, and in order to launch forced evacuation. PAGASA hopes to install 10 sensors in five landslide prone areas by 2012, when it is tested and ready to bury on ground.

Another innovation to flood alerts was the adoption of an Automated Weather Station (AWS) designed to monitor amounts of rainfall and flood levels in case of an incoming warning, the AWS can be controlled by a computer even it is unmanned and a siren to evacuate people for emergencies. Few of the AWS units are installed in few points of the country and many more units will be installed to extend its coverage.