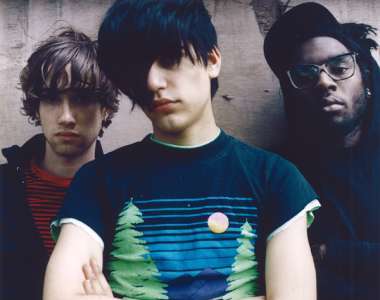 Test Icicles were a short-lived formed in , primarily influenced by but containing musical elements from a variety of genres (notably hip-hop, and punk). The band was formed in 2004 by and , who were later joined by . Hynes and Mehran were both only 18 years old at the time of the band's conception.

According to the group's record label (), the name "Test Icicles" is not derived from the word "", but rather from a practice of early man, involving the "testing" of s for their strength and fitness for use as s. However, this is extremely debatable and is probably an example of the band's surreal humour, seeing as a previous incarnation of the group (featuring Mehran, Atwell and ' Ferry Gouw) was named "Balls".

Prior to forming the band, Atwell, Hynes and Mehran (all of whom shared vocal and guitar duties) had met each other through mutual friends. The trio's preferance for the same nightspots (such as the Afterskool night club, in London) also led to frequent meet-ups. All three members of the group were involved in numerous, short-lived musical projects before the forming of Test Icicles;some of these taking shape only as songs posted on various music profiles (such as Mehran's DANGEROUSDUDE output). Hynes and Mehran continued this trend throughout the existence of Test Icicles with the NLS Crew, a collective founded by the pair and whose most prominent output was a remix of
's "Black History Month" single (which is available on DFA 1979's "").According to the , Domino had signed Test Icicles near sight-unseen. This probably explains the label's surprise and suggested re-working of initial album material completed by the band. In 2005 the group went to France with producer to record their debut album .

Following the release of the album (on ) the band toured the with Art Brut before returning to Europe for additional performances.

In February 2006, the band announced they were splitting up. [ [http://www.nme.com/news/test-icicles/22284 Test Icicles split | News | NME.COM ] ] In an interview with NME in March 2006, Hynes claimed that "We were never, ever that keen on the music. I understand that people liked it, but we personally, er, didn't.".

The band then completed a small 5 show UK tour before splitting.

On the band released "", an EP meant as a farewell from the band. It featured a CD with remixes and unreleased tracks, and a DVD with the band's music videos and footage from the band's performance at the LSE in November 2005. It was first sold at the band's five final shows before becoming available in record stores a week later.

After the band split, Atwell and Hynes continued to stay active, becoming involved in a number of s between them. Attwell formed RAT:ATT:AGG (later known as 'Wrists'), who had a small number of releases and remixed for bands such as and . The band announced their official split on and offered fans free downloads of their songs. Atwell has since gone on to play drums and guitar in KASMs.Hynes currently records under the name (also signed to ) and in early 2008 released a succesful album entitled ''.

Hynes has also collaborated with the band under the name . In 2007 they released a 7" EP. This, however, was another one off side project.

Mehran is believed to have moved back to America after the split and is claimed to have been spotted working in a record store in New York [http://www.flickr.com/photos/heardism/1368324326/ Flickr] . It is also believed he is no longer in contact with his former bandmates.

At live shows the members would play along to pre-recorded drum and bass tracks played from an .

The band shared song-writing duties, with most music being written by Mehran

Amps - All three of the members would switch guitar duties, usually sharing the same amps. They usually used a Valveking 1x12, a small combo, or a Fender Hot Rod deluxe.

Effects - It is hard to see which effects they used, but one picture shows an WORM modulation pedal, which is probably responsible for the ring modulation effect in the song "Boa vs. Python". In an interview they claimed to use the same effects as nu-metal group .

* The song "Circle. Square. Triangle" has been re-recorded four times, and features in the trailer of the 2007 comedy, "Hot Rod".
* In 2006 they remixed 's single 'Burn' from the album Crimson. The track appears on the CD single.