A continuous wave or continuous waveform (CW) is an electromagnetic wave of constant amplitude and frequency; and in mathematical analysis, of infinite duration. Continuous wave is also the name given to an early method of radio transmission, in which a carrier wave is switched on and off. Information is carried in the varying duration of the on and off periods of the signal, for example by Morse code in early radio. In early wireless telegraphy radio transmission, CW waves were also known as "undamped waves", to distinguish this method from damped wave transmission.

Very early radio transmitters used a spark gap to produce radio-frequency oscillations in the transmitting antenna. The signals produced by these spark-gap transmitters consisted of brief pulses of radio frequency oscillations which died out rapidly to zero, called damped waves. The disadvantage of damped waves was that they produced electromagnetic interference that spread over the transmissions of stations at other frequencies. Mathematically, the extremely wideband excitation provided by the spark gap was bandpass filtered by the self-oscillating antenna side circuit, which because of its simple construction, unfortunately also had a relatively broad and badly controlled filter characteristic.

This motivated efforts to produce radio frequency oscillations that decayed more slowly. Strictly speaking an unmodulated, continuous carrier has no bandwidth and cannot interfere with signals at other frequencies, but on the other hand conveys no information either. Thus it is commonly understood that the act of keying the carrier on and off is necessary. However, in order to bring the bandwidth of the resulting signal under control, the buildup and decay of the radio frequency envelope needed to be slower than in the early spark gap implementations.

When this is done, the spectrum of the signal approaches that of a continuous sinusoidal oscillation, while temporally its amplitude does vary between zero and full carrier strength. As such, the resulting narrower bandwidth mode of operation is to this day described as "continuous wave". The resulting signal allows many radio stations to share a given band of frequencies without noticeable mutual interference. 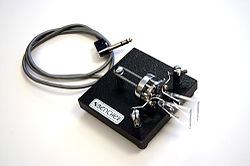 Early radio transmitters were incapable of handling the complexity of actual audio and therefore CW was the only form of communication available. CW still remained a viable form of radio communication for many years after voice transmission was perfected, because simple transmitters could be used. The low bandwidth of the code signal, due in part to low information transmission rate, allowed very selective filters to be used in the receiver which blocked out much of the atmospheric noise that would otherwise reduce the intelligibility of the signal.

Continuous-wave radio was called radiotelegraphy because like the telegraph, it worked by means of a simple switch to transmit Morse code. However, instead of controlling the electricity in a cross-country wire, the switch controlled the power sent to a radio transmitter. This mode is still in common use by amateur radio operators.

A continuous-wave radar system is one where a continuous wave is transmitted by one aerial while a second aerial receives the reflected radio energy.

In military communications and amateur radio, the terms "CW" and "Morse code" are often used interchangeably, despite the distinctions between the two. Morse code may be sent using direct current in wires, sound, or light, for example. A carrier wave is keyed on and off to represent the dots and dashes of the code elements. The carrier's amplitude and frequency remains constant during each code element. At the receiver, the received signal is mixed with a heterodyne signal from a BFO (Beat frequency oscillator) to change the radio frequency impulses to sound. Though most commercial traffic has now ceased operation using that mode, it is still popular with amateur radio operators.

Older non-directional beacons used in air navigation use CW to transmit their identifier.

In any form of on-off carrier keying, if the carrier wave is turned on or off abruptly, the bandwidth will be large; if the carrier turns on and off more gradually, the bandwidth will be smaller. What is transmitted in the extra bandwidth used by a transmitter that turns on/off more abruptly is known as key clicks. Certain types of power amplifiers used in transmission may increase the effect of key clicks.

In laser physics and engineering the term "continuous wave" or "CW" refers to a laser which produces a continuous output beam, sometimes referred to as 'free-running'. This is as opposed to a q-switched, gain-switched or modelocked laser, which produces pulses of light.