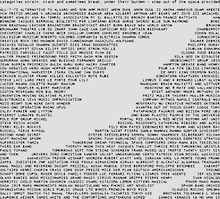 The Nurse with Wound list is a list of 291[1] musicians and bands that accompanied Chance Meeting on a Dissecting Table of a Sewing Machine and an Umbrella (1979), the first album by Nurse With Wound. The list was expanded with Nurse With Wound's second album, To the Quiet Men from a Tiny Girl (1980).

The list was compiled by the original Nurse With Wound trio of Steven Stapleton, John Fothergill, and Heman Pathak. It was intended as a homage to the artists which influenced the Nurse With Wound project.[2][3] It has since become a type of 'shopping list' for collectors of outsider and avant-garde music. Given their obscurity, some of the artists named on the list have been a mystery for many collectors.[4] Stapleton has even boasted that some of the names on the list were invented,[5] a statement absolutely refuted by John Fothergill.[6]