Synchronization is timekeeping which requires the coordination of events to operate a system in unison. The familiar conductor of an orchestra serves to keep the orchestra in time.

Systems operating with all their parts in synchrony are said to be synchronous or in sync. 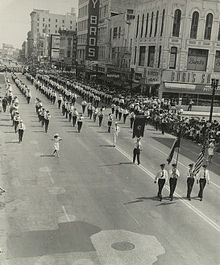 Firefighters marching in a parade

Some systems may be only approximately synchronized, or plesiochronous. For some applications relative offsets between events need to be determined, for others only the order of the event is important.

Today, synchronization can occur on a global basis due to GPS-enabled timekeeping systems.

Apart from its use for navigation (see John Harrison), synchronization was not important in transportation until the nineteenth century, when the coming of the railways made travel fast enough for the differences in local time between adjacent towns to be noticeable (see [1]).

In some territories, sharing of single railroad tracks was controlled by the timetable. Thus strict timekeeping was a safety requirement. To this day, railroads can communicate and signal along their tracks, independently of other systems for safety.

The lessons of timekeeping are part of engineering technology. In electrical engineering terms, for digital logic and data transfer, a synchronous object requires a clock signal. Timekeeping technologies such as the GPS satellites and Network time protocol (NTP) provide real-time access to a close approximation to the UTC timescale, and are used for many terrestrial synchronization applications.

Synchronization is an important concept in the following fields:

Some uses of synchronization

In the field of video and audio engineering:

In the field of aircraft gun engineering: