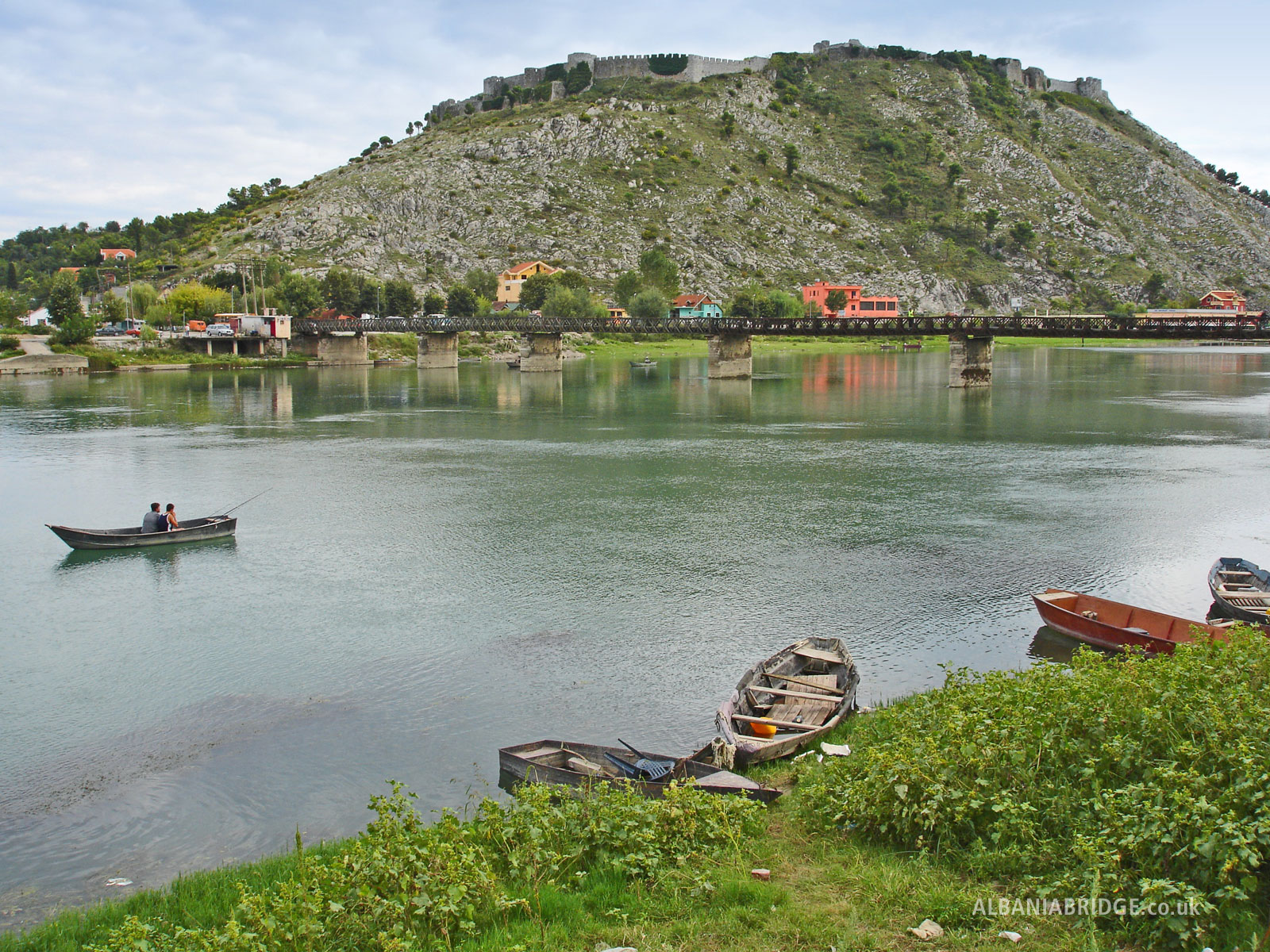 The origins of the city's name remain shrouded in mystery. Some scholars believe that the name derives from "Shko-drin" which means "where Drin goes", Drin being the Drin river that connects with the Buna river next to the . Others believe the name has a Latin root. Another reference claims that the name "Skodra" was used even before the area was occupied by the Romans.

Shkodër was founded around the 4th century BC. This was the site of the Illyrian tribe Labeates as well as the capital of the kingdom of and that of . In the year , the city was taken by the Romans and it became an important trade and military route.

The dawn of the Middle Ages saw waves of arriving. describes how Byzantine Emperor gave the the city of Shkodër and the surrounding territories of during the first half of the 7th century. They soon formed the Principality of there. Shkodër was a major city of the medieval Serb state. Duklja was subjected to its northern neighbor, the Principality of , forming the "Grand Principality of Rascia". Its rulers recognized Bulgarian Czars as their supreme rulers during the first half of the 10th century. Soon Grand Prince Časlav of the House of Klonimir gained control of the local n lands previously under Byzantine and Bulgarian rule. Shkodër soon became Duklja's capital during the reign of Saint John Vladimir in the second half of the 10th century who defended the city from the menacing "Arbanas" tribes. John had to briefly surrender Duklja to the Bulgarian ruler Samuil. The Byzantines later incorporated the region directly into their empire, forming the "theme of Serbia" governed by "strategos" . from expelled the last "strategos of Serbia" and fought the Byzantines successfully during the first half of the 11th century, keeping its independence. He won the city from the "Romei" "circa" 1040. It soon became a major city of a revived Duklja. "King of Duklja and " accepted the crusaders of the in Shkodër. After numerous dynastic struggles, Shkodër become a part of Zeta, an entity subjected to the Grand Principality of Rascia in the 12th century. It later fell to the hands of the followed afterwards by the Dukagjini control who surrendered the city to the Venetian rule, forming a coalition against the with many neighboring Albanian tribes.

Shkodër resisted two major Ottoman attacks, in 1474 and 1478&ndash;1479, under the leadership of (who became leader of the Albanian resistance following the death of in 1468), when the city was entirely surrounded by Ottoman forces. It fell under Turkish rule after a heroic struggle in 1479. After the Turkish occupation the city was devastated, and a large number of the population fled. Around the 17th century, the city began to prosper and it became the center of a , an Ottoman administrative unit smaller than a vilayet. It became the economic center of northern Albania, its craftsmen producing fabric, silk, arms, and silver artifacts. Construction included two-story stone houses, the , and the Central or Middle Bridge ("Ura e Mesit") over the Kir river, built during the second half of the 18th century, over 100 meters long, with 13 arcs of stone, the largest one being 22 meters wide and 12 meters tall.

Shkodër became an important trade center in the second half of the 19th century. Aside from being the center of the vilayet of Shkodër, it was an important trading center for the entire Balkan peninsula. It had over 3,500 shops, and clothing, leather, tobacco, and gun powder were some of the major products of Shkodër. A special administration was established to handle trade, a trade court, and a directorate of postage services with other countries. Other countries had opened consulates in Shkodër ever since 1718. and served as ports for Shkodër, and later on ("San Giovanni di Medua"). The seminar and the committee were opened in the 19th century. It was also the main spot for transporting 'illegal' things through Montenegro and throughout eastern Europe.Fact|date=February 2007

In the 19th century Shkodër was also known as a cultural center. The , built during the 1840s, served as a center for the League of Prizren's branch for Shkodër. Many books were collected in libraries of Catholic missionaries working in Shkodër. Literary, cultural, and sports associations were formed, such as "Bashkimi" ("The Union") and "Agimi" ("The Dawn"). The first Albanian newspapers and publications printed in Albania came out of the printing press of Shkodër. The Marubi family of photographers began working in Shkodër, which left behind over 150,000 negatives from the period of the Albanian liberation movement, the rise of the Albanian flag in , and life in Albanian towns during the end of the 19th and the beginning of the 20th century.

During the , Shkodër was occupied by the Kingdom of Montenegro. The Ottoman forces led by Hasan Riza Pasha had resisted for seven months the surrounding of the town by Montenegrin forces and their Serbian allies. Essad finally surrendered to Montenegro in April 1913, after suffered more that 10,000 casualties. Montenegro was compelled to leave the city to the new country of in May 1913, in accordance with the London Conference of Ambassadors.

During , Montenegrin forces again entered Shkodër on . In January 1916, Shkodër was taken over by and was the center of the zone of their occupation. After World War I, the international military administration of Albania was temporarily located in Shkodër, and in March, 1920, Shkodër was put under the administration of the national government of Tirana. In the second half of 1920, Shkodër resisted another threat, the military intervention of the forces of the Kingdom of Serbs, Croats and Slovenes. Shkodër was the center of democratic movements of the years 1921&ndash;1924. The democratic opposition won the majority of votes for the Constitutional Assembly, and on , , the democratic forces took over the town and from Shkodër headed to Tirana. From 1924 to 1939, Shkodër had a slow industrial development, small factories that produced food, textile, and cement were opened. From 43 of such in 1924, the number rose to 70 in 1938. In 1924, Shkodër had 20,000 inhabitants, the number grew to 29,000 in 1938.

Shkodër was the seat of the Catholic and had a number of religious schools. The first laic school was opened here in 1913, and the State Gymnasium was opened in 1922. It was the center of many cultural associations, such as "Vllaznia".

During the early 1990s, Shkodër was once again a major center, this time of the democratic movement that finally brought to an end the communist regime established by .

Shkodër is an important educational and industrial center. The city produces various mechanical and electrical components, as well textile and food products. Shkodër is also the site of the and of the . The main library of the city contains more than 250,000 books. Other cultural institutions are the Cultural Center, the Artists and Writers Association, the "Migjeni" Theater (named after ), the Gallery of Arts, and the Museum of History. Skoder is the center of Albanian Catholicism and the most prominent city of Sunni Islam in Albania. The city has the cathedral and mosque of the country. Other noteworthy cultural elements include the , the , the Lead Mosque. The Castle of Shkodër become famous during the First Balkan War when it was protected by the Turkish general Hassan Riza Pasha and

Shkodër is also famous for its Islamic scholarship. Indeed it was the only institution in Albania which provided high-level education in Arabic and Islamic Studies and highly famous Muslims personalities, such as Shaykh Nasirudin Albani have originated from Shkodra.

The songs of the northern city of Shkodër - one of the most cosmopolitan of Albanian towns and the centre of intellectual life - are different from the rural music. Lyrical, romantic and sophisticated, with oriental-sounding scales and a constant interplay of major and minor, they bear an affinity with the "sevdalinke" of Bosnia and the neighboring , but differ from them in their extreme and typically Albanian restraint and the exceptional fluidity of rhythm and tempo. Early descriptions of such groups, which date from the end of the nineteenth century, suggest a remarkable sound: violin, clarinet, saz, def, sometimes and Indian-style harmonium and percussion provided by rattling a stick between two bottles. These days the accordion and guitar have replaced the more exotic instruments, but the intimate approach of the singers remains the same. Among the most important players are Bik Ndoja, Luçija Miloti, Xhevdet Hafizi and Bujar Qamili.

Today the city and the area around it is blessed with numerous and different natural and cultural objects. The most attractive quarters with such peculiarities are Serresh and Gjuhadol, but the most important objects is the castle of Rozafa. The history of the castle starts since the Illyrian times. A very interesting legend explains its history. The main theme of the legend has to do with keeping of promise. Rozafa the bride of the youngest of three brothers was walled up in order that the walls of the castle do not fall down by the night. The water passing through the stones at the main entrance are connected in the folk fantasy with the water going out from the bossom of Rozafa, which she left out during the time she was walled up in order to feed her little baby.

Another interesting historical site are the ruins of medieval town of Sarda, situated only 15 km far away from Shkodër. To go there you must take a motor-boat which sails from the dam of Vau i Dejes artificial lake to the island where Sarda is located (10 miles). This boat operates for tourists during the summer times, twice per week. Sarda was a medieval town with a surface of 5 ha built on the top of the hill surrounded by the waters of Drini river (now artificial lake). It was the residential place of the famous Dukagjini Feudal Family. There was a great prince palace of this family.

The very characteristic appearance of the city is formed by the old houses and the narrow streets formed by tall stone walls. After , Shkodër was rebuilt with wider streets and new residential buildings. These were built in several new quarters. Shkodra is also the home of the biggest and liveliest stadium in :