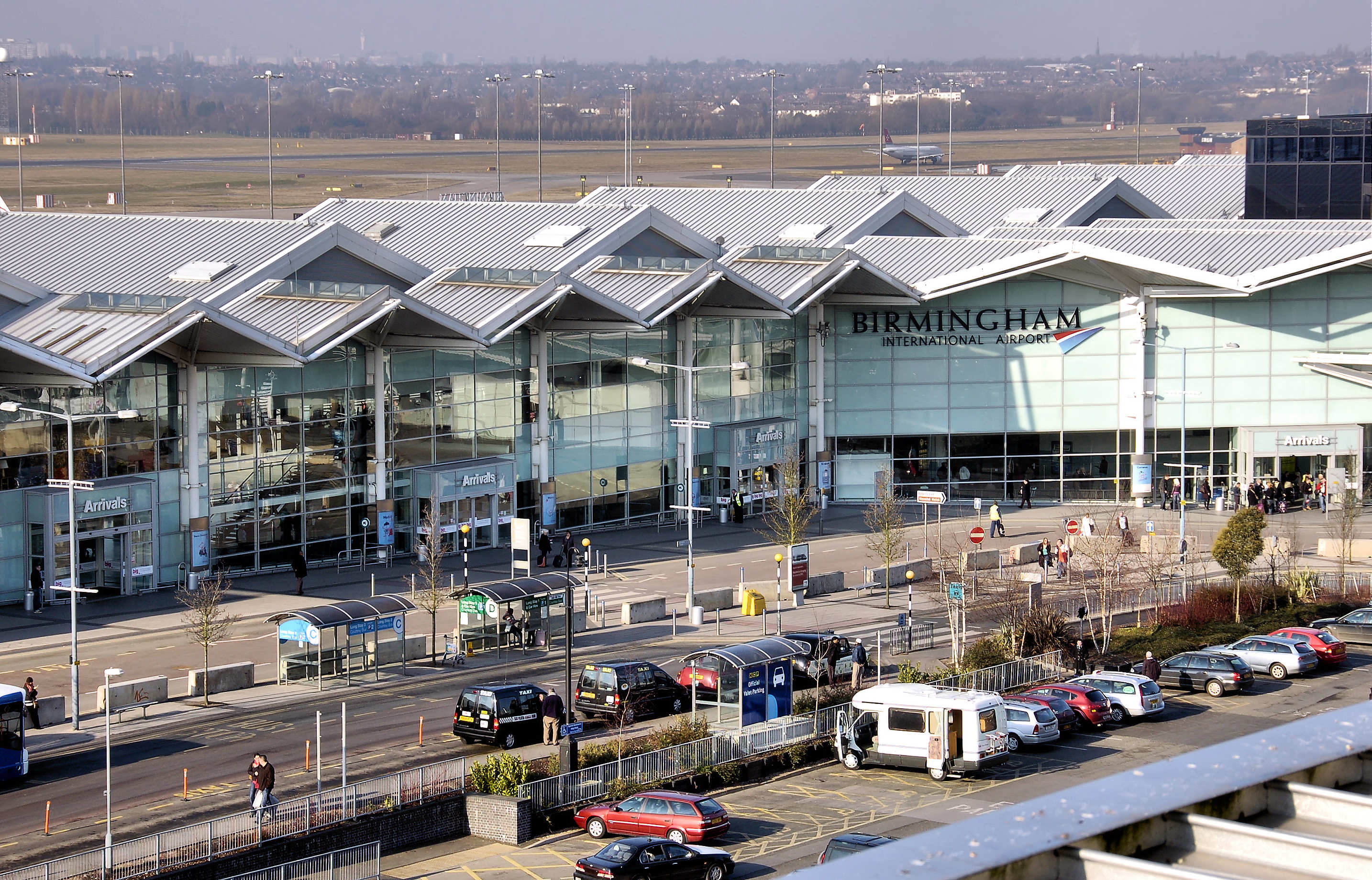 Birmingham International Airport Airport codes|BHX|EGBB is an international airport located 5.5 s (10.2 km) east southeast of city centre, in the borough of Solihull, West Midlands, . In 2007 it was the sixth busiest airport in the UK after London Heathrow, London Gatwick, London Stansted, Manchester and London Luton, and second busiest not serving London after Manchester.

Birmingham has a CAA Public Use Aerodrome Licence (Number P451) that allows flights for the public transport of passengers or for flying instruction.

The airport is close to the and A45 main road. It is connected by the elevated with on the .

The airport was opened at Elmdon on , , and was owned and operated by Birmingham City Council. During , the airport was requisitioned by the and was used by the RAF for military purposes. During this time, the original grass strip was replaced by two hard s: 06/24 at convert|2469|ft|m|0 and 15/33 at convert|4170|ft|m|0 [cite web |url=http://www.bhx.co.uk/page.aspx?type=T0NaZj9WNoU=&id=dV3VqlpH6fQ=&page=LWxZQXV7VzA= |title=The History of Birmingham International Airport |work=Birmingham International Airport |accessdate=2008-04-29 ] . bombers manufactured at the Austin Aero Company's shadow factory at could not take off from the short runways at . Instead they were transported by road, minus the wings that would be attached at Elmdon. Test flown from the aerodrome, once declared airworthy they were then flown to their operational units. The aerodrome returned to civilian use in July 1946, though still under government control.

During the post-war years, public events, such as air fairs and air races were held on the site. The City of Birmingham took over responsibility again on , and assumed full responsibility on , . [cite book |title=The Aeroplane and Astronautics |publisher=Temple Press |year=1959 | pages=252 ] The main runway was extended in the late 1960s to allow large jet operations. Ownership of the airport passed to the newly-formed in 1974.

In 1984, a new terminal was opened, able to handle three million passengers a year. A second terminal, "Eurohub", the first terminal in the world to combine domestic and international passengersFact|date=September 2008, opened on , (with in attendance), more than doubling the airport's capacity. The original 1939 terminal and control tower are still visible, near hangars to the west of the runway.

In 1983, the airport was privatised, although the local authorities still own a 49% share. On , the ownership of the Airport transferred to Birmingham International Airport plc, a public limited company owned by the seven West Midlands district councils.

In 1995 the Maglev Airport Rapid Transit system, which had been running between the airport and on a convert|600|m|ft|0|adj=on track since 1984, [cite book| title=Control Systems Design: A New Framework |author=Vladimir Zakian |publisher=Springer |pages=328 |year=2005 |isbn=1852339136] was closed due to high cost and problems sourcing parts. A cable driven "" system replaced the Maglev line and it reopened in 2003.

Concorde made a final visit on , as part of her farewell tour.

"Take Off", a sculpture by the Polish artist Walenty Pytel, stands in a roundabout on the approach road. It was erected in 1985 and is convert|1.4|m|ft|1|abbr=on tall. The unpolished steel sculpture was designed to commemorate 40 years of peace in Europe. [cite book| title=Public Sculpture of Birmingham |last=Noszlopy |first=George Thomas |coauthors= Jeremy Beach |pages=12 |publisher=Liverpool University Press |year=1998 |isbn=0853236925]

In June 2007, the airport made headlines when British TV series Tonight with Trevor McDonald revealed the findings of an investigation into airport security. They found that contractors from the company ICTS fell asleep on duty, ignored baggage x-rays and worked under the influence of illegal drugs. [ [http://www.itv.com/news/tonight_d7f1bcf7d787db3f24d411eecf43d7c0.html ITV webpage on the "Tonight" programme] ]

The shorter runway (06/24) was decommissioned in January 2008. It had been used with less frequency due to its length, noise impact, and its inconvenient position crossing the main runway making it uneconomic to continue operation. The closure also allows for apron expansion on both sides of the remaining runway. [cite web |url=http://www.bhx.co.uk/page.aspx?type=bEyZftSD20U=&id=jAERoqnLlek=&article=rdsD6yHXUNk= |work=Birmingham International Airport |title=End of an Era as Airport Permanently Closes Runway |accessdate=2008-04-29 ]

The airport has published a master plan for its development up to 2030. This sets out details of changes to the terminals, airfield layout and off-site infrastructure. As with all large scale plans, the proposals are controversial, with opposition from environmentalists and local residents. In particular the requirement for a second parallel runway based on projected demand is disputed by opponents.

The first major element is an extension to the runway, targeted for completion in time for the 2012 London Olympics. The extension will increase the runway length to convert|3000|m|ft|0, as well as including a starter strip to provide a maximum takeoff run of convert|3150|m|ft|0. The airport owners believe there is likely to be sufficient demand for long-range direct services operated by aircraft whose operation would be constrained by the current runway. At convert|2605|m|ft|0, this is short for an airport with Birmingham's passenger throughput and range of destinations, and limits aircraft to destinations on the east coast or in the midwest of , in the Gulf and , or on the South Asian subcontinent. The construction of this extension to the southern end of the runway will require the A45 Coventry Road to be diverted into a tunnel under the extended section. Plans for the extension of the airport runway and the construction of a new air traffic control tower were submitted to Solihull Metropolitan Borough Council on .

Taxiways will be improved to allow for terminal expansion and to improve runway occupancy rates. One new turnoff was completed in June 2006 and has seen an improvement on traffic rates on southerly operations, where the only available option for landing traffic had been to travel to the end of the runway to turn off.

The development of Terminal 1 will see improvements made to the International Pier and a new satellite pier to the north of the terminals. The masterplan also details the need for a third terminal, which will coincide with the opening of the second parallel runway. The planned extension to the main runway will also require a new control tower to be constructed.

It was announced on , that plans for a second runway had been scrapped but plans to build another terminal and increase capacity will go ahead with works expected to finish in 2012. It is estimated that 11 million passengers a year will use the airport by 2010 and 15 million by 2013.

In June 2008 work began on the construction of the new ‘International Pier’. The new Pier will be a three storey construction; 240 metres long and 24 metres wide. Departing passengers will be accommodated on the top level, with arriving passengers on the middle level and office accommodation for airline and handling agents on the ground floor.

*On the morning of , , a Bombardier-CL604 business jet crashed on take-off from runway 15 at Birmingham. [ [http://www.aaib.gov.uk/publications/formal_reports/no_5_04_030576.cfm "AAIB Report on N90AG accident"] ] The aircraft with registration N90AG was on lease by AGCO corporation and was carrying two company executives, two pilots and an observer. After arriving from West Palm Beach Airport the previous evening, the aircraft was parked overnight at Birmingham where ice formed on the wings due to the cold weather conditions. The following morning the pilots did not request de-icing of the aircraft before their flight to Bangor Airport in . The ice on the wings caused one wing to dip on take off, the aircraft inverted, crashed into grass besides the runway and caught fire. There were no survivors. Sleeping pills taken by both pilots the night before the crash are thought to have been a factor in reducing the pilots' judgment.

*On , , a operating a flight from , , was involved in a serious incident while on approach to Birmingham International Airport. The aircraft descended to the published minimum descent altitude of 740 ft despite still being 11 nm from the runway threshold. At a point 6 nm from the runway the aircraft had descended to an altitude of 660 ft, which was 164 ft above ground level. Having noticed the descent profile, Birmingham Air Traffic Control issued an immediate climb instruction to the aircraft, however, the crew had already commenced a , having received a GPWS alert. The aircraft was radar vectored for a second approach during which the flight crew again initiated an early descent. On this occasion, the radar controller instructed the crew to maintain their altitude and the crew successfully completed the approach to a safe landing. The accident investigation determined that the primary cause was use of the incorrect DME for the approach, combined with a substantial breakdown in . Three safety recommendations were made. [cite web |url=http://www.aaib.dft.gov.uk/sites/aaib/publications/formal_reports/7_2007_f_ojhi.cfm | title=Report on the serious incident to Airbus A310-304, registration F-OJHI, on approach to Birmingham International Airport on 23 February 2006 | work= UK AAIB | accessdate= 2007-12-28 ]

*On , , a cargo 737-300 made an emergency landing at Birmingham with damaged landing gear. [ [http://www.aaib.dft.gov.uk/publications/special_bulletins/s5_2006_boeing_737_301sf__oo_tnd.cfm "AAIB Report on OO=TND incident"] ] The aircraft, registration OO-TND, had been flying from Liege in Belgium to Stansted. Due to poor visibility at Stansted the flight diverted to . As the weather at East Midlands was also poor, the aircraft performed a full autopilot approach. During this approach the autopilot momentarily disengaged causing it to deviate from the course. The aircraft hit the grass to the side of the runway, which caused the right main gear to detach. The crew initiated a go-around, declared an emergency and diverted to Birmingham. After it landed on Birmingham's main runway, the airport was closed for a number of hours. The pilots were unharmed. [ [http://aviation-safety.net/database/record.php?id=20060615-0 "Aviation safety network summary of TNT accident"] ] However, the company ascribed the incident to human error and both pilots were dismissed. [ [http://news.bbc.co.uk/1/hi/england/west_midlands/5219956.stm "BBC News article, 27 July 2006 - "Cargo plane crash pilots sacked"] ] The official report into the accident highlighted a number of factors contributing to the accident - poor weather forecast information; A message passed from to the aircraft at an "inappropriate" time; The pilot accidentally disconnecting the when attempting to respond to the message; The pilot losing "situational awareness" and failing to abort the landing.