Security engineering is a specialized field of engineering that focuses on the security aspects in the design of systems that need to be able to deal robustly with possible sources of disruption, ranging from natural disasters to malicious acts. It is similar to other systems engineering activities in that its primary motivation is to support the delivery of engineering solutions that satisfy pre-defined functional and user requirements, but with the added dimension of preventing misuse and malicious behavior. These constraints and restrictions are often asserted as a security policy.

In one form or another, security engineering has existed as an informal field of study for several centuries. For example, the fields of locksmithing and security printing have been around for many years.

Due to recent catastrophic events, most notably 9/11, Security Engineering has quickly become a rapidly growing field. In fact, in a recent report completed in 2006, it was estimated that the global security industry was valued at US$150 billion.[1]

Security engineering involves aspects of social science, psychology (such as designing a system to 'fail well' instead of trying to eliminate all sources of error) and economics, as well as physics, chemistry, mathematics, architecture and landscaping.[2] Some of the techniques used, such as fault tree analysis, are derived from safety engineering.

Other techniques such as cryptography were previously restricted to military applications. One of the pioneers of security engineering as a formal field of study is Ross Anderson.

Typical qualifications for a security engineer are:

However, multiple qualifications, or several qualified persons working together, may provide a more complete solution.[3]

The two possible default positions on security matters are:

1. Default deny - "Everything, not explicitly permitted, is forbidden"

Improves security at a cost in functionality.
This is a good approach if you have lots of security threats.
See secure computing for a discussion of computer security using this approach.

2. Default permit - "Everything, not explicitly forbidden, is permitted"

Allows greater functionality by sacrificing security.
This is only a good approach in an environment where security threats are non-existent or negligible.
See computer insecurity for an example of the failure of this approach in the real world.

Technological advances, principally in the field of computers, have now allowed the creation of far more complex systems, with new and complex security problems. Because modern systems cut across many areas of human endeavor, security engineers not only need consider the mathematical and physical properties of systems; they also need to consider attacks on the people who use and form parts of those systems using social engineering attacks. Secure systems have to resist not only technical attacks, but also coercion, fraud, and deception by confidence tricksters.

According to the Microsoft Developer Network the patterns & practices of Security Engineering consists of the following activities:

These activities are designed to help meet security objectives in the software life cycle. 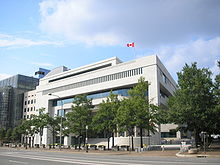 Canadian Embassy in Washington, D.C. showing planters being used as vehicle barriers, and barriers and gates along the vehicle entrance

Whatever the target, there are multiple ways of preventing penetration by unwanted or unauthorised persons. Methods include placing Jersey barriers, stairs or other sturdy obstacles outside tall or politically sensitive buildings to prevent car and truck bombings. Improving the method of visitor management and some new electronic locks take advantage of technologies such as fingerprint scanning, iris or retinal scanning, and voiceprint identification to authenticate users.

Use of the term engineer

Some criticize this field[who?] as not being a bona fide field of engineering because the methodologies of this field are less formal or excessively ad-hoc compared to other fields and many in the practice of security engineering have no engineering degree.

Security engineering is not considered to be a true form of systems engineering by some[citation needed]. Part of the problem lies in the fact that while conforming to positive requirements is well understood; conforming to negative requirements requires complex and indirect posturing to reach a closed form solution. In fact, some rigorous methods do exist to address these difficulties but are seldom used, partly because they are viewed as too old or too complex by many practitioners. As a result, many ad-hoc approaches simply do not succeed.