The meaning of the term deep diving is a form of technical diving.[1] It is defined by the level of the diver's diver training, diving equipment, breathing gas, and surface support:

This definition essentially relates to recreational diving. Deep diving may have quite a different meaning in the commercial diving field. For instance the early experiments carried out by Comex S.A. (Compagnie maritime d'expertises) using hydrox and also nitrogen trimix attained far greater depths than any recreational technical diving. One example being the Comex Janus IV open-sea dive to 500 metres, in 1977.[2] The open-sea diving depth record was achieved in 1988 by a team of Comex divers who performed pipe line connection exercises at a depth of 534 metres in the Mediterranean Sea as part of the Hydra 8 programme.[3] These divers needed to breathe special gas mixtures because they were exposed to very high ambient pressure (more than 50 times atmospheric pressure). An atmospheric diving suit allows very deep dives of up to 700 metres. These suits are capable of withstanding the pressure at great depth permitting the diver to remain at normal atmospheric pressure. This eliminates the problems associated with breathing high pressure gases. 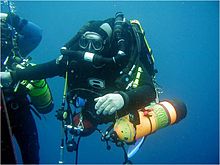 Deep diving has more consequences and dangers than basic open water diving.[6] Nitrogen narcosis, the “narks” or “rapture of the deep”, starts with feelings of euphoria and over-confidence but then leads to numbness and memory impairment similar to alcohol intoxication. Decompression sickness, or the “bends”, can happen if a diver ascends too fast, when excess inert gas leaves solution in the blood and tissues and forms bubbles. These bubbles produce mechanical and biochemical effects that lead to the condition. The effects tend to be delayed until reaching the surface. Bone degeneration (dysbaric osteonecrosis) is caused by the bubbles forming inside the bones; most commonly the upper arm and the thighs. Air embolism causes loss of consciousness and speech and visual problems. This tends to be life threatening, and requires a recompression chamber for treatment. Deep diving involves a much greater danger of all of these, and presents the additional risk of oxygen toxicity, which may lead to a convulsion underwater. Very deep diving using a helium–oxygen mixture (heliox) carries a risk of high pressure nervous syndrome. Coping with the physical and physiological stresses of deep diving requires good physical conditioning.[7]

Using normal scuba equipment, breathing gas consumption is proportional to ambient pressure - so at 50 metres (160 ft), where the pressure is 6 bar, a diver breathes 6 times as much as on the surface (1 bar). Heavy physical exertion causes even more gas to be breathed, and gas becomes denser requiring increased effort to breathe with depth, leading to increasing risk of hypercapnia, an excess of carbon dioxide in the blood. The need to do decompression stops increases with depth. A diver at 6 metres (20 ft) may be able to dive for many hours without needing to do decompression stops. At depths greater than 40 metres (130 ft), a diver may have only a few minutes at the deepest part of the dive before decompression stops are needed. In the event of an emergency the diver cannot make an immediate ascent to the surface without risking decompression sickness. All of these considerations result in the amount of breathing gas required for deep diving being much greater than for shallow open water diving. The diver needs a disciplined approach to planning and conducting dives to minimise these additional risks. 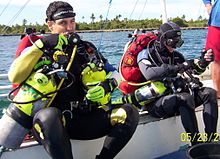 Technical divers preparing for a mixed-gas decompression dive in Bohol, Philippines. Note the backplate and wing setup with sidemounted stage tanks containing EAN50 (left side) and pure oxygen (right side).

Amongst technical divers, there are certain elite divers who participate in ultra-deep diving on SCUBA (using closed circuit rebreathers and heliox) below 660 feet (200 m). Ultra-deep diving requires extraordinarily high levels of training, experience, fitness and surface support. Only eight (or possibly nine) persons are known to have ever dived below a depth of 800 feet (240 m) on self contained breathing apparatus recreationally.[8][9][nb 6][10] That is fewer than the number of people who have walked on the surface of the moon. The Holy Grail of deep SCUBA diving was the 1,000 ft (300 m) mark, first achieved by John Bennett in 2001, and has only been achieved five times since. Dives of this nature have been impossible to verify - proof being as tangible as faith more often than not. Since the recent introduction of depth gauges capable of reading to 330m it is unlikely that such records will be attempted in the future.

Besides scuba, there is a small group of divers who have reached depths below 200 meters on closed-circuit rebreathers. Some examples are David Shaw, Don Shirley, Alessandro Scuotto, Marco Reis, Mario Marconi, Paul Raymeakers and Pim van der Horst.

While extreme deep diving on air is extremely dangerous, before the popularity of Trimix attempts were made to set world record depths using conventional air. This created an extreme risk of both narcosis and oxygen toxicity in the divers and, perhaps unsurprisingly, contributed to an astonishingly high fatality rate amongst those attempting records. In his book, Deep Diving, Bret Gilliam chronicles the various fatal attempts to set records as well as the smaller number of successes.[11] From the comparatively few who survived extremely deep air dives:

In deference to the high death rate, the Guinness World Records ceased to publish records on deep air dives.[when?]