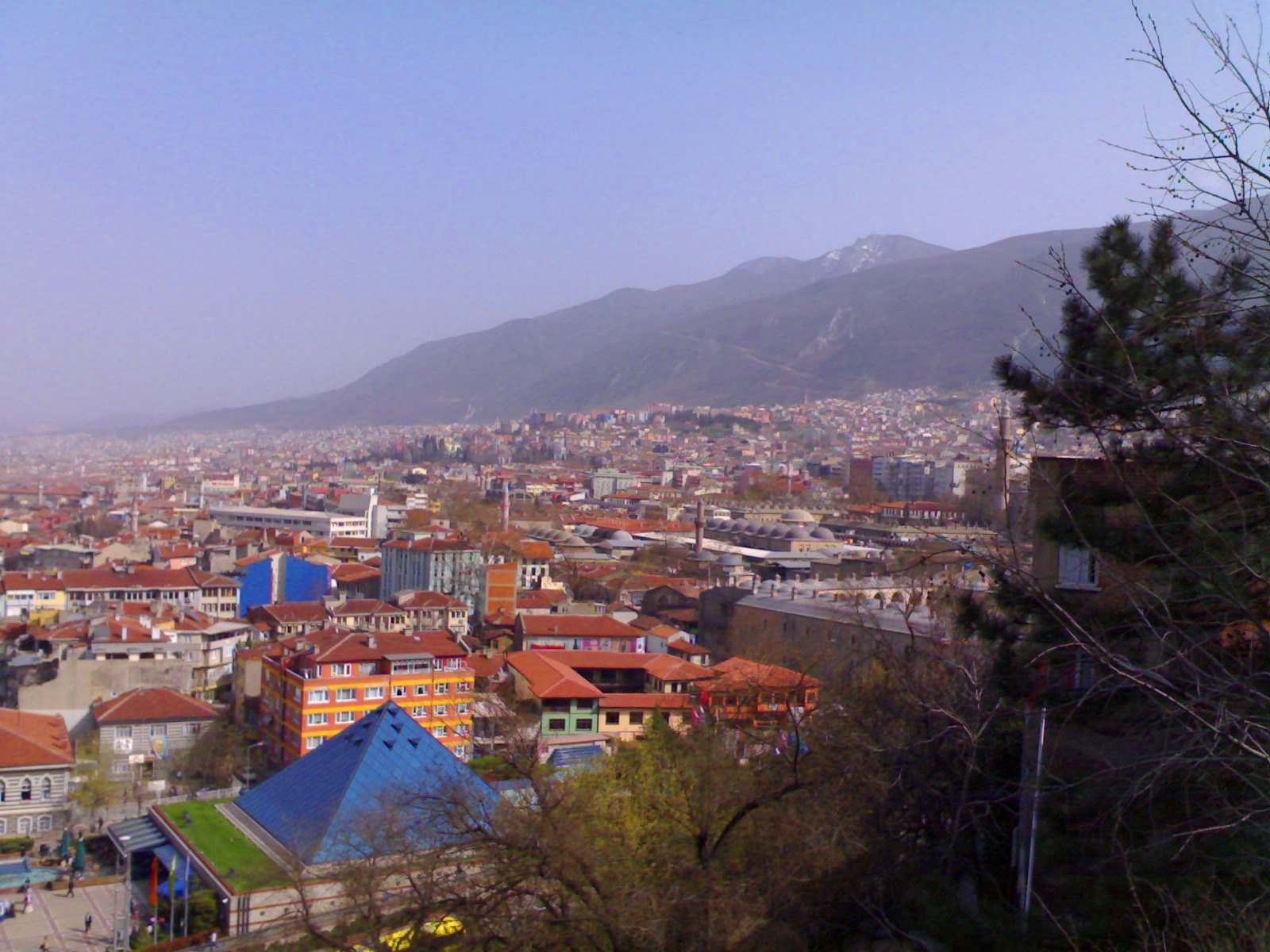 Bursa (historically also known as "Prussa", Greek: Προύσα, and later as "Brusa") is a city in northwestern and the seat of . With a population of 1,562,828 (2007), it is Turkey's fourth largest city, as well as one of the most industrialized and culturally charged metropolitan centers in the country.

The city is frequently cited as "Yeşil Bursa" (meaning "Green Bursa") in a reference to the parks and gardens located across its urban tissue, as well as to the vast forests in rich variety that extend in its surrounding region. The city is synonymous with the mountain which towers behind the city core and which is also a famous . The mausoleums of early Ottoman sultans are located in Bursa and the numerous edifices built throughout the Ottoman period constitute the city's main landmarks. The surrounding fertile plain, its s, several interesting museums, notably a rich museum of , and a rather orderly urban growth are further principal elements that complete Bursa's overall picture.

characters were historic personalities who lived and are buried in Bursa. Bursa is also home to some of the most famous Turkish dishes, especially candied s and . Its peaches are also well-renowned. Among its depending district centers, , historic , is especially notable for its long history and important edifices. Bursa is home to , and its population attains one of the highest overall levels of education in Turkey. It has traditionally been a pole of attraction and of refuge for immigration into Turkey from the , in sizable waves at times until quite recently.

The earliest known site at this location was , which ia granted to the n king Prusias I in , for his help against and (modern ). Prusias renamed the city after himself, as Prusa.

It was later a major city, located on the westernmost end of the famous , and was the capital of the following its capture from the shrinking in 1326. After the city was captured from the Byzantine Empire, many structures were built especially when it was the capital city of the Ottoman Empire. The capture of in 1365 brought that city to the fore as well, but Bursa remained an important administrative and commercial center even after it lost its status as the sole capital. Sortly after it was taken by the Ottomans they developed a school of theology at Bursa. This school attracted Muslim schoolars from throughout the Middle East and continued to function after the capital had been moved elsewhere.

During the Ottoman rule, Bursa was the source of most royal products. Aside from the local production, it imported raw silk from , and occasionally , and was the 'factory' for the kaftans, pillows, embroidery and other silk products for the royal palaces up through the 17th century. Another traditional occupation is making and, historically, building. Nowadays one can still find hand-made knives as well as other products in rich variety produced by artisans, but instead of carriages, there is a big automobile industry.

Bursa sits on a like most of Turkey. The city was partially leveled by strong earthquakes coupled with fires and was rebuilt after each time. Being on the first degree earthquake zone, it was widely affected by the earthquakes which took place in 1855 and 1905.

Bursa is the toe of Turkey's industry. and have for decades had important production units in Bursa. The textile and food industries are equally strong, and , , and other beverages brands, as well as fresh and industries are present in the city's organized industrial zones.

Traditionally, Bursa was famous for its fertile soil and agricultural activities, both of which are decreasing due to the heavy industrialization of the city.

Bursa is also a major tourist center: One of the best ski resorts of Turkey is located at just next to city proper. Its thermal baths have been used for therapeutical purposes since Roman times. Apart from baths operated by hotels, Uludağ University has a center which also makes use of thermal water.

is located in Bursa and is a prominent university in Turkey's Marmara Region. It was founded in 1975, first under the name Bursa Üniversity, then re-named Uludağ Üniversity in 1982. In the 2005-06 academic year, the university had a student body of 47,000.

Bursa has a professional soccer team, , that plays in the . They are known as the "Yeşil Timsahlar" ("Green Alligators") and play their home matches at .

Sailing Sports on Catamarans are strong here with locally made boats including: NetCat 16, and...

Ulu Camii is the major mosque of Bursa and a landmark of early . It was built by Ali Neccar in 1396-1399, at Sultan 's command. The mosque is large and rectangular, with twenty domes arranged in four rows of five supported by twelve columns. Supposedly twenty domes are built instead of twenty separate mosques that Sultan promised for winning the . It has two s. Inside the mosque there are 192 monumental wall inscriptions written by famous calligraphers. There is also a fountain (şadırvan) inside the mosque where worshipers can perform ritual ablutions before prayer; the dome over the şadırvan is capped by a skylight, creating a soft, serene light below. The story of the şadırvan inside the mosque, which is unheard of, that the land belong to an old lady who objected to her store taken by padişah. Because consent is not given for the piece of land, prayer cannot be conducted on it thus a şadırvan is built. Architecturally şadırvan helps to have light inside the mosque that is big.

The horizontally spacious and dimly lit interior is designed to feel peaceful and contemplative. The subdivisions of space formed by multiple domes and pillars create a sense of privacy and even intimacy. This atmosphere contrasts with later Ottoman mosques (see for example the work of Süleyman I's chief architect ). These later mosques have increasingly elevated central domes, which create a vertical emphasis that is intended to be more overwhelming, in order to convey the power and majesty of the Ottoman Empire. It is a beautiful piece of architecture.

Bursa has twenty sister cities. is the latest to become a sister city of Bursa [ [http://www.bursa-bld.gov.tr/uluslararasi/uluslararasi.asp?uluslararasiID=2&uluslarID=3&dil=Turkce Bursa Metropolitan Municipality Web Site; "Sister Cities".] ] . The date each sister city agreement entered into effect is shown in parentheses.