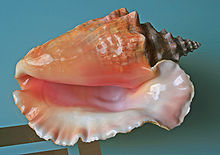 Apertural view of an adult shell of the queen conch Lobatus gigas, from Trinidad & Tobago 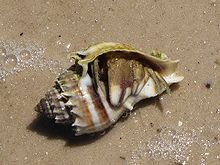 /ˈkɒŋk/ or /ˈkɒntʃ/)[1] is a common name which is applied to a number of different species of medium-sized to large sea snails or their shells, generally those which are large and have a high spire and a siphonal canal.

True conches are marine gastropod molluscs in the family Strombidae, specifically in the genus Strombus and other closely related genera such as Eustrombus.

There are also many species often called "conch" that are not in the family Strombidae, and these include Melongena species (family Melongenidae), and the horse conch Pleuroploca gigantea (family Fasciolariidae). They also include the sacred chank or more correctly Shankha shell (Turbinella pyrum) and other Turbinella species in the family Turbinellidae.

Second in popularity only to the escargot for edible snails, the "meat" of conches is used as food, either eaten raw, as in salads, or cooked, as in fritters, chowders, gumbos, and burgers. All parts of the conch meat are edible.[2] However, some people find only the white meat appetizing.

In East Asian cuisines, this seafood is often cut into thin slices and then steamed or stir-fried.

In the West Indies (and The Bahamas in particular), local people eat conch in soups (commonly Callaloo) and salads. Restaurants all over the islands serve this particular meat.

In Providenciales in the Turks and Caicos Islands (at Three Queens, Blue Hills) there is the Annual Conch Festival in November each year. Local restaurateurs compete for the best and original conch dishes, and are judged by international chefs. Free sampling of the dishes follows, and there are other competitions, events and music well into the evening, making this a very popular event for Islanders and tourists.[3]

In the island of Grenada, conch is commonly eaten in curries or in a spicy soup. It is locally referred to as lambi.

In Puerto Rico, conch is served as a ceviche: raw conch marinated in orange juice. [2]

Conch shells can be used as wind instruments. They are prepared by cutting a hole in the spire of the shell near the apex, and then blowing into the shell as if it were a trumpet, as in blowing horn. Sometimes a mouthpiece is used, but some shell trumpets are blown without one.

Various species of large marine gastropod shells can be turned into "blowing shells", but some of the best-known species used are the sacred chank or shankha Turbinella pyrum, the "Triton's trumpet" Charonia tritonis, and the Queen Conch Strombus gigas.

Many gastropods (snails and sea snails, of which the conch is the latter) produce pearls, and those of the Queen Conch, Strombus gigas, have been collectors' items since Victorian times.[4] Conch pearls come in a range of hues, including white, brown and orange and many intermediate shades, but pink is the colour most associated with the conch pearl. Conch pearls are sometimes referred to simply as 'pink pearls'.[4] In some gemmological texts, non-nacreous gastropod pearls used to be referred to as 'calcareous concretions' because they were 'porcellaneous' (i.e. shiny and ceramic-like) in appearance rather than 'nacreous' (i.e. with a pearly luster sometimes known as 'orient'). The GIA and CIBJO now simply use the term 'pearl' (or, where appropriate, the more descriptive term 'non-nacreous pearl') when referring to such items[5][6] and, under Federal Trade Commission rules, various mollusc pearls may be referred to as 'pearls' without qualification.[7] Although non-nacreous, the surface of fine Conch pearls has a unique and attractive appearance of its own. The microstructure of conch pearls comprises partly aligned bundles of microcrystalline fibres which create a shimmering, slightly iridescent effect known as 'flame structure'. The effect is a form of chatoyancy, caused by the interaction of light rays with the microcrystals in the pearl's surface, and it somewhat resembles Moiré silk.

A drawing of the shell of Strombus alatus, the Florida fighting conch 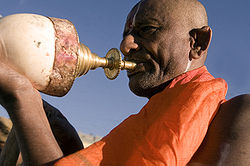 A Hindu priest blowing a Shankha (a shell of Turbinella pyrum) during a puja.

A Shankha shell (the shell of a Turbinella pyrum, a species in the gastropod family Turbinellidae) is often referred to in the West as a conch shell, or a chank shell. This shell is used as an important ritual object in Hinduism. The shell is used as a ceremonial trumpet, as part of religious practices, for example puja. The chank trumpet is sounded during worship at specific points, accompanied by ceremonial bells and singing. As it is an auspicious instrument, it is often played in a Lakshmi puja in temple or at home.

In the story of Dhruva the divine conch plays a special part. The warriors of ancient India blew conch shells to announce battle, as is described in the beginning of the war of Kurukshetra, in the Mahabharata, the famous Hindu epic.

The god of Preservation, Vishnu, is said to hold a special conch, Panchajanya, that represents life, as it has come out of life-giving waters.

Also, the sound of the conch is believed to drive away the evil spirits. The blowing of the conch or "the Shankha" needs a tremendous power and respiratory capacity.Hence, blowing it daily helps keep the lungs healthy.

Buddhism has also incorporated the conch shell, Turbinella pyrum, as one of the Eight Auspicious Symbols.

The Moche people of ancient Peru worshiped the sea and often depicted conch shells in their art.[12]

Literature and the oral tradition

William Golding's Lord of the Flies features frequent references to "the conch". In the book the conch is used as a trumpet to call everyone together and held by whoever is speaking at meetings, symbolically representing democracy and order. The conch is seen as a delicate and beautiful object to represent this concept although its fragility is shown when it "exploded into a thousand white fragments and ceased to exist."

The famous Old English riddle Ic wæs be Sonde describes a conch: "I was by sound, near seawall, at ocean-stream; I dwelt alone in my first resting place. ... Little did I know that I, ere or since, ever should speak mouthless over mead-benches." Another meaning given to this riddle ‘Ic wæs be Sonde’ is that the sound of the conch corresponds to spiritualised sound as heard in higher realms. In the Hindu tradition, the conch shell is used in ceremony as the sound it makes is said to correspond with higher frequency universal sounds associated with music of the spheres.

In popular folklore, it is believed that if one holds an open conch shell (or any other large marine snail shell) to the ear, the ocean can be heard. This phenomenon is caused by the resonant cavity of the shell producing a form of pink noise from the surrounding background ambiance.[citation needed]

a still, quiet crane
shines on a lotus leaf
like a conch shell lying
on a flawless emerald plate.

Ostional a pueblo in the municipality of San Juan del Sur in the Rivas Department of the Southwest region of Nicaragua was, by accounts of multiple testimonials in the local region, to be founded by their indigenous ancestors due to an abundant conch population at the sea shore to which they migrated. Subsequently, the tribe used the shells of the conch in many held rituals and customs. In 2008, it was reported by witnesses of local archaeological dig that conch shells were found within the graves of some indigenous people within their recently rediscovered cemetery grounds. Some still maintained jade stones, implying the significance of conch shells within their tribal society.[citation needed]