Born in Oklahoma City, Oklahoma, Warren attended The George Washington University, the University of Houston, and received a J.D. from Rutgers School of Law–Newark in 1976. In the wake of the U.S. financial crisis, Warren served as chair of the Congressional Oversight Panel created to oversee the Troubled Assets Relief Program and later Assistant to the President and Special Advisor to the Secretary of the Treasury for the Consumer Financial Protection Bureau under U.S. President Barack Obama. Warren was twice named one of the 100 Most Influential People in the World by Time magazine.[1]

Elizabeth Herring[2] was born June 22, 1949,[3] in Oklahoma City, Oklahoma, to working class parents Pauline and Donald Herring.[4] She was the Herrings' fourth child, with three older brothers.[5] When Warren was twelve, her father, a janitor, had a heart attack, which led to a pay cut, medical bills, and eventually the loss of their car. Her mother went to work answering phones at Sears and Warren worked as a waitress.[5][6]

At Northwest Classen High School she was named "Oklahoma's top high-school debater", which led her to receive a full debate-team scholarship to George Washington University at the age of 16. Initially aspiring to be a teacher, she left after two years to marry her high-school boyfriend Jim Warren.[7][5] Jim was a NASA engineer in Houston at the time, and Elizabeth moved to Houston to live with him. She enrolled in the University of Houston where she graduated in 1970 with a degree in speech pathology and audiology, hoping specifically to work with brain-injured children.[8] She went on to teach for a year in a public school helping children with disabilities. However, she had not taken the required education courses to get a teaching certificate (she previously taught under an "emergency certificate"). After taking several graduate education courses, she realized she no longer wanted to pursue education as a career. By this point she and Jim had moved to New Jersey, and she was pregnant with their first child, so she stayed at home for several years.[9][10][11]

After meeting some former classmates she was convinced to study law,[9] and enrolled at the Rutgers School of Law–Newark, where she served as an editor of the Rutgers Law Review, and was one of two female summer associates at Cadwalader, Wickersham & Taft's Wall Street office.[12] She received her J.D. law degree in 1976. Shortly before graduating, she became pregnant with her second child, which made it difficult to pursue an active law career. Instead she worked from home, writing wills and doing real estate closings for walk-in clients.[7][9]

She and Jim had two children before divorcing in 1978: Amelia Warren Tyagi, with whom Elizabeth would later coauthor two books and several articles, and a son, Alexander Warren. Today they have three grandchildren.[13] In 1980, Warren married Bruce Mann, a legal historian and law professor, also at Harvard Law School. She has taught Sunday School and cites Methodist founder John Wesley as an inspiration.[14]

In 1977, while working out of her home, Warren was contacted by Rutgers and asked to fill an open teaching position, which she accepted. Shortly thereafter, she moved with Jim to Texas, where she began a full-time teaching position at the University of Houston Law Center. Throughout the 1980s and 1990s she taught law at several universities throughout the country, while ramping up her research into bankruptcy and middle-class personal finance.[9] In a 2007 interview, Warren spoke of the experience that led her to devote her career to work that would eventually lead her to become the nation's top authority on the economic pressures facing the American middle class. In 1978 Congress had passed a law that made it easier for companies and individuals to declare bankruptcy and Warren decided "to set out to prove they were all a bunch of cheaters... I was going to expose these people who were taking advantage of the rest of us". However, she instead found that the vast majority of those in bankruptcy courts were from hardworking middle-class families: people who had lost their jobs or had family breakups or illnesses that had wiped out their savings. "It changed my vision," she said.[5]

In 1995 Warren was asked to advise the National Bankruptcy Review Commission. She helped to draft the commission's report and then spent several years opposing legislation meant to severely restrict the right of consumers to file for bankruptcy. Warren and others opposing the legislation were not successful and in 2005 the Bankruptcy Abuse Prevention and Consumer Protection Act of 2005 was passed by Congress.[16]

Warren appeared in the documentary film Maxed Out in 2006, has appeared several times on Dr. Phil to talk about money and families, has been a guest on The Daily Show,[17] is interviewed frequently on cable news networks,[18] appears in Michael Moore's Capitalism: A Love Story, has appeared on the Charlie Rose talk show,[19] and has appeared on the Real Time With Bill Maher talk show.[20] She has also appeared on the PBS show NOW.[21]

From November 2006 to November 2010, Warren was a member of the FDIC Advisory Committee on Economic Inclusion, which advises the FDIC "on important initiatives focused on expanding access to banking services by underserved populations".[22] She is a member of the National Bankruptcy Conference, an independent organization which advises the U.S. Congress on bankruptcy law.[23] She is the former Vice-President of the American Law Institute and a member of the American Academy of Arts and Sciences. From 2005 to 2008, Warren and her law students wrote a blog called Warren Reports, part of Josh Marshall's TPMCafe.

In addition to writing more than 100 scholarly articles and six academic books, Warren has written several best-selling books, including All Your Worth: The Ultimate Lifetime Money Plan, coauthored with her daughter, Amelia Tyagi.

Warren is also the co-author (with Tyagi) of The Two-Income Trap: Why Middle-Class Mothers and Fathers Are Going Broke. Warren and Tyagi point out that a fully employed worker today earns less inflation-adjusted income than a fully employed worker did 30 years ago. To increase their income, families have sent a second parent into the workforce. Although families spend less today on clothing, appliances, and other consumption, the costs of core expenses such as mortgages, health care, transportation, child care have increased dramatically. The result is that even with two-income earners, families are no longer able to save and have incurred greater and greater debt.

In an article in The New York Times, Jeff Madrick said of Warren's book:

The upshot is that two-income families often have even less income left over today than did an equivalent single-income family 30 years ago, even when they make almost twice as much. And they go deeper in debt. The authors find that it is not the free-spending young or the incapacitated elderly who are declaring bankruptcy so much as families with children... their main thesis is undeniable. Typical families often cannot afford the high-quality education, health care and neighborhoods required to be middle class today. More clearly than anyone else, I think, Ms. Warren and Ms. Tyagi have shown how little attention the nation and our government have paid to the way Americans really live.[24]

In an article in Time magazine by Maryanna Murray Buechner, "Parent Trap" (subtitled "Want to go bust? Have a kid. Educate same. Why the middle class never had it so bad"), Buechner said of Warren's book:

For families looking for ways to cope, Warren and Tyagi mainly offer palliatives: Buy a cheaper house. Squirrel away a six-month cash cushion. Yeah, right. But they also know that there are no easy solutions. Readers who are already committed to a house and parenthood will find little to mitigate the deflating sense that they have nowhere to go but down.[25]

In 2005, Dr. David Himmelstein and Warren published a study on bankruptcy and medical bills,[26] which disclosed that half of all families filing for bankruptcy did so in the aftermath of a serious medical problem. The finding was particularly noteworthy because 75 percent of families who fit that description had medical insurance.[27] This study was widely cited in academic studies and policy debates, though some have questioned the study's methods and offered alternative interpretations of the data.[28]

In an interview at Newsweek, Warren commented, "To restore some basic sanity to the financial system, we need two central changes: fix broken consumer-credit markets and end guarantees for the big players that threaten our entire economic system.[30]

On July 29, 2011, she left her role with the agency to return to academic life at Harvard Law School. Her departing address indicated how she first became involved:

Four years ago, I submitted an article to Democracy Journal that argued for a new government agency called the Financial Product Safety Commission. I threw myself into that piece because I felt strongly that a new consumer agency would make the credit markets work better for American families and strengthen the economic security of the middle class... I leave this agency, but not this fight... the issues we deal with – a middle class that has been squeezed and business models built on tricks and traps – are deeply personal to me, and they always will be.[31]

Warren has long advocated for the creation of a new Consumer Financial Protection Bureau, a watchdog agency designed to "make basic financial practices such as taking out a mortgage or loan more clear and transparent while ferreting out unfair lending practices," according to CNN. Through Warren's efforts, the bureau was established by the Dodd–Frank Wall Street Reform and Consumer Protection Act signed into law by Obama in July 2010. For the first year after the bill's signing, Warren worked on implementation of the bureau as a Special Assistant to the President in anticipation of the agency's formal opening. While liberal groups and consumer advocacy groups pushed for Obama to nominate Warren as the agency's permanent director, Warren was strongly opposed by Republican members of Congress. Furthermore, she did not have the strong support of the Obama administration, particularly Treasury Secretary Tim Geithner. In July 2011, Obama instead announced the nomination of former Ohio Attorney General Richard Cordray as the bureau's director, subject to Congressional approval.[32]

On September 14, 2011, Warren declared that she intended to run for the Democratic nomination for the 2012 election in Massachusetts for the United States Senate against incumbent Scott Brown.[33][34] On September 21, a video of Warren explaining the rationale of her economic policy received attention on the Internet.[35] EMILY's List, the nation's largest resource for women in politics, has endorsed Warren saying, "Elizabeth is a champion for progressive values and a fighter for the middle class".[36] She has also drawn strong support from ActBlue.[37] As of mid-October 2011, polling shows that Warren and Brown are within five points of each other in the general election.[38] 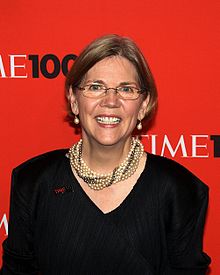 Since the late 2000s, Warren has been recognized by several institutions as a major political figure. In 2009, the Boston Globe named her the Bostonian of the Year,[8] and the Women's Bar Association of Massachusetts honored her with the Lelia J. Robinson Award.[39] She was named one of Time Magazine's 100 Most Influential People in the World in 2009 and 2010.[1] The National Law Journal has repeatedly named Warren as one of the Fifty Most Influential Women Attorneys in America,[40] and in 2010 they honored her as one of the 40 most influential attorneys of the decade.[41]

Warren has been recognized for her dynamic teaching style. In 2009, Warren became the first professor in Harvard's history to win the law school's teaching award twice. The Sacks-Freund Teaching Award was voted on by the graduating class in honor of "her teaching ability, openness to student concerns, and contributions to student life at Harvard." Warren also has won awards from her students at the University of Pennsylvania, the University of Michigan, and the University of Houston Law Center. She delivered the commencement address at the Rutgers School of Law–Newark in May 2011, where she was awarded an Honorary Doctor of Laws degree and was conferred membership into the Order of the Coif.[42]