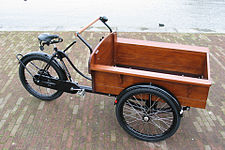 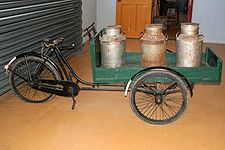 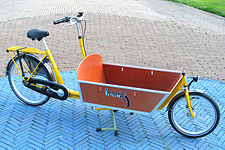 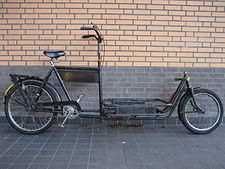 Freight bicycles, carrier cycles, freight tricycles, cargo bikes, or bakfietsen, are human powered vehicles designed and constructed specifically for transporting large loads. Vehicle designs include a cargo area consisting of a steel tube carrier, an open or enclosed box, a flat platform, or a wire basket. These are usually mounted over one or both wheels, low behind the front wheel, or between parallel wheels at either the front or rear of the vehicle. The frame and drivetrain must be constructed to handle loads several times that of an ordinary bicycle. Other specific design considerations include operator visibility and load suspension. Many, but not all, cycles used for the purpose of vending goods are cargo bicycles.

The first freight bicycles were used by tradesmen for delivering mail, bread and milk amongst others.

An early example of freight bicycles was heavy-duty standard bicycles, with heavy carriers at front or rear, sometimes with a smaller front wheel to accommodate a large front carrier. During the early part of the 20th Century these were commonly used by tradespeople for local deliveries. In the UK this style is still sometimes known as a butcher's bike or delibike, although the Post Office have by far the largest fleet; a more formal name is Porteur bicycle. Modern freight cycles still vary quite widely, with many old types still in production as well as a certain amount of new invention, and are often being tailored to particular applications.

With the domination of the combustion engine in the industrialized countries after World War II, freight bikes were relegated to factory floor duties and public park novelties such as ice cream bikes. In the rest of the world, they continued to be manufactured and heavily used. In the 1980s in Europe, and the 1990s in the US, ecologically-minded designers and small-scale manufacturers initiated a revival of the freight bike manufacturing sector.

A more recent development is the 'longtail' bike. It has a very long wheelbase, with the additional space behind the rider, for more space on the rear luggage rack, and strong frame and wheels to carry more weight on and around the rear wheel. This avoids the complications of a steering linkage found on cargo bikes with front loading cargo area, but does not provide a single large storage area. It is also more stable due to its long wheelbase. As of 2011 Kona (the Ute), Yuba (the Mundo)[1], Madsen (the Madsen)[2], and Sun Bicycles (the Sun Atlas Cargo)[3] manufacture complete bicycles; Surly Bicycles a frameset[4] or complete bike[5] called the Big Dummy; and Xtracycle offers a kit to convert a regular frame into a longtail, in addition to a single-piece frame complete bicycle (the Radish). 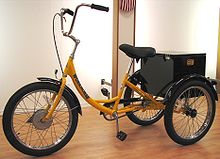 In Amsterdam it is common to rent a worktrike to move one's belongings, have a party in a park or promote a new product. Furniture retailer IKEA is also testing a freight bike rental program[6] to allow residents of Copenhagen to transport new purchases.

Because of the strong economic advantages realizable by widespread proliferation of freight bicycles, Oxfam has designed the OxTrike and established local production at community workshops in non-industrialized countries for use in non-industrialized countries worldwide. Dangdang, China’s biggest online bookseller, uses 30 bicycle courier companies in 12 cities to deliver goods and collect payments. Karaba, a free-trade coffee co-op in Rwanda, uses 400 modified bicycles to carry hundreds of pounds of coffee beans to be processed.[7]

In Amsterdam, the Netherlands, and Copenhagen, Denmark, freight bikes are extremely popular. In Amsterdam many residents simply fit large front carriers to sturdy city bicycles. There is also a broad variety of specially made freight bikes including low-loading two-wheelers with extended wheelbases, bicycles with small front wheels to fit huge front carriers, tadpole-type three wheelers with a box between the two front wheels. Varieties used elsewhere include a platform, basket etc. instead of the box, the loading area between two rear wheels (delta-fashion), small-wheel two wheelers loading both back and front. An occasional four wheeler can also be seen, especially within a plant, warehouse or the like, where demands on stability and loading capacity are higher than on range. In the USA Worksman has built strong delivery bicycles since 1898 and they are still popular in factories and NYC street delivery work. Danish firm larry vs harry produces the iconic Bullitt fast freight bike in a number of variants with high specification features and associated culture.

Cargo bikes have much to commend them. They have some advantages over motorized vehicles such as:

A limitation of a human-powered utility vehicle is the relative weakness of human power compared to many motors, leaving a narrow scope for balancing tare weight, payload, geographical and topographical range against each other. These limitations might in some cases dissuade some people from using cargo bikes, whereas others still find them useful, and have been in increasing numbers.[citation needed]

Some cargo bike makers and users utilize power assist motors (often with electric motors) to complement the power of the cyclist.[8] Power assist can increase the payload and range of cargo bikes, but also increases the cost of the bicycle and requires a fuel or electrical source.

Because of the unavoidable physical demands on a driver who also has to propel the vehicle, and the lack of protection against either the elements or other traffic, there is also a potential for working conditions becoming a problem. Technical efforts to improve conditions are hampered by the need for low weight and sturdy simplicity to achieve low costs in small-scale operations.