On 10 January 1954, British Overseas Airways Corporation Flight 781 a de Havilland DH.106 Comet 1 registered G-ALYP, took off from Ciampino Airport in Rome, Italy, en route to Heathrow Airport in London, England, on the final leg of its flight from Singapore. At about 10:00 GMT, the aircraft suffered an explosive decompression at altitude and crashed into the Mediterranean Sea, killing everyone on board.

Of the 29 passengers, 10 were children.[1] Chester Wilmot, a prominent Australian journalist and military historian working for the BBC, was one of those killed.

Gerry Bull, a former BOAC engineer, said that when he inspected the aircraft in Rome he looked for "incidental damage." He did not find any, so he believed Flight 781 was fit for flight. Bull and the same team of engineers later examined South African Airways Flight 201 before its final flight.[2]

At about 09:50 GMT a passing BOAC Argonaut G-ALHJ was in contact with Captain Gibson. During a radio communication about weather conditions, the conversation was abruptly cut off. The last words heard from Captain Gibson were "George How Jig, did you get my..". About this time wreckage was seen falling into the sea by a fisherman.

Heathrow Airport initially listed Flight 781 as being delayed; around 1:30 PM the airport took the flight off the arrivals board.[2]

That day's edition of The New York Times carried a piece about the accident.

At first the task of finding out what happened was difficult. In 1954, there were no black boxes, no cockpit voice recorders or flight data recorders so there was no way of knowing what was going on. Established protocol for aircraft accident investigation did not exist.[2]

An extensive search for the aircraft was organised including the Royal Navy ship Malta.

Witnesses to the crash were a group of Italian fishermen who were preparing to do their catch. Upon seeing the plane's remnants falling into the water, the fishermen rushed to the scene to recover the bodies and to find possible survivors, of which there were none. In order to find more evidence concerning the cause of the crash, the bodies were brought to the coroner for autopsy. During the examination, the pathologist Antonio Fornari found broken limbs and damaged limbs, which occurred after death. But Fornari also discovered a distinct pattern of injuries, which were identified as the cause of death, in most of the victims. These injuries consisted of fractured skulls and ruptured and otherwise damaged lungs. Fornari found no evidence of an explosion, and he felt confused by the pattern of injuries.[2]

The ruptured lungs were a sure indicator that the air cabin depressurised because the sudden decrease in pressure would cause the lungs to expand until they rupture. In order to support the theory and also to confirm the cause of the skull fractures, the crash was simulated at the Royal Aircraft Establishment in Farnborough, using the same conditions of the actual plane prior to crash. To do this experiment, a model fuselage was constructed similar to that of the Comet.

Dummies were also seated within the fuselage to simulate possible movements of passengers during the crash. To simulate the crash, the investigators deliberately ruptured the model by increasing the air pressure within it until it exploded. The movement of the dummies within the air cabin at the moment of explosion was conclusive of skull fracture as they were thrown out of their seats and slammed head-first into the ceiling.

Wreckage of the aircraft was eventually found on the sea floor and subsequently raised and transported to the Royal Aircraft Establishment for investigation. Upon examination of the wreckage it became obvious that the aircraft had broken up in mid-air, and initially it was thought that the aircraft might have been brought down by a bomb. Suspicion then shifted to the possibility of an engine turbine explosion and modifications were put in hand to encase the turbine ring in other Comets with armour plate, to contain a possible disintegrating turbine disk.

In the meantime, all Comets were to be grounded until these modifications had been carried out. The possibility of failure of the pressure cabin had been considered but then discounted due to the Comet's cabin having been designed to a considerably higher strength than was considered necessary at the time.

The following day, the New York Times reported that BOAC had withdrawn all Comets from service.

While the investigation continued, BOAC desperately tried to get Comets back in service, and on 23 March it succeeded. BOAC's chairman commented on television, "We obviously wouldn't be flying the Comet with passengers if we weren't satisfied conditions were suitable." But a second BOAC Comet was lost on 8 April 1954, a charter flight operating as South African Airways Flight 201 took off from Rome bound for Egypt with 14 passengers and seven crew. Thirty-three minutes into the flight the pilot reported to be on course flying at 10,000 metres, then all contact was lost.

Sir Arnold Hall, a Cambridge University scholar and scientist, was appointed as the head accident investigator.[2] 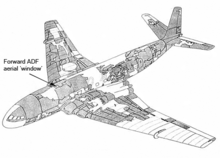 The recovered (shaded) parts of the wreckage of G-ALYP and the site (arrowed) of the failure.

Initial examination and reconstruction of the wreckage of G-ALYP revealed several signs of inflight break-up:

When most of the wreckage was recovered, investigators found that fractures started in the roof of the cabin, a window then smashed into the elevators, the rear fuselage then tore away, the outer wing structure fell, then the outer wing tips and finally the cockpit broke away and fuel from the wings set the debris on fire.

To find out what caused the first failure, BOAC donated G-ALYU ("Yoke Uncle") for testing. The airframe was put in a large water tank, the tank was filled, and water was pumped into the plane to simulate flight conditions. The experiment occurred 24 hours per day, 7 days per week. It could possibly have taken as long as five months. A Seconds From Disaster documentary episode described this task as "grueling." If the hypothesis was tested in the 2000s, investigators would have used computer technology to determine the effect of pressurization.[2]

After the equivalent of 3,000 flights investigators at the RAE were able to conclude that the crash had been due to failure of the pressure cabin at the forward ADF window in the roof. This 'window' was in fact one of two apertures for the aerials of an electronic navigation system in which opaque fibreglass panels took the place of the window 'glass.' The failure was a result of metal fatigue caused by the repeated pressurisation and de-pressurisation of the aircraft cabin. Another fact was that the supports around the windows were riveted, not glued, as the original specifications for the aircraft had called for. The problem was exacerbated by the punch rivet construction technique employed. Unlike drill riveting, the imperfect nature of the hole created by punch riveting caused manufacturing defect cracks which may have caused the start of fatigue cracks around the rivet. The investigators examined the final piece of wreckage with a regular microscope.[2]

The Comet's pressure cabin had been designed to a safety factor comfortably in excess of that required by British Civil Airworthiness Requirements (2.5x P as opposed to the requirement of 1.33x P and an ultimate load of 2x P, P being the cabin 'Proof' pressure) and the accident caused a revision in the estimates of the safe loading strength requirements of airliner pressure cabins.

The fuselage roof fragment of G-ALYP showing the two ADF 'windows', on display in the Science Museum in London.[3]

In addition, it was discovered that the stresses around pressure cabin apertures were considerably higher than had been anticipated, especially around sharp-cornered cut-outs, such as windows. As a result, future jet airliners would feature windows with rounded corners, the curve eliminating a stress concentration. This was a noticeable distinguishing feature of all later models of the Comet.

52 years after the incident, Paul Withey, an aviation expert, went to the Science Museum in London to examine the aircraft parts with 2000s technology. The aircraft piece was mounted on a plate. Withey received an impression of the aircraft part using a silicone-based putty. At Imperial College London in London Withey used an electron microscope to examine the putty impression of the fatigue crack. He found a manufacturing defect when zooming to 800 times and confirmed that Sir Arnold Hall's investigation was correct.[2]