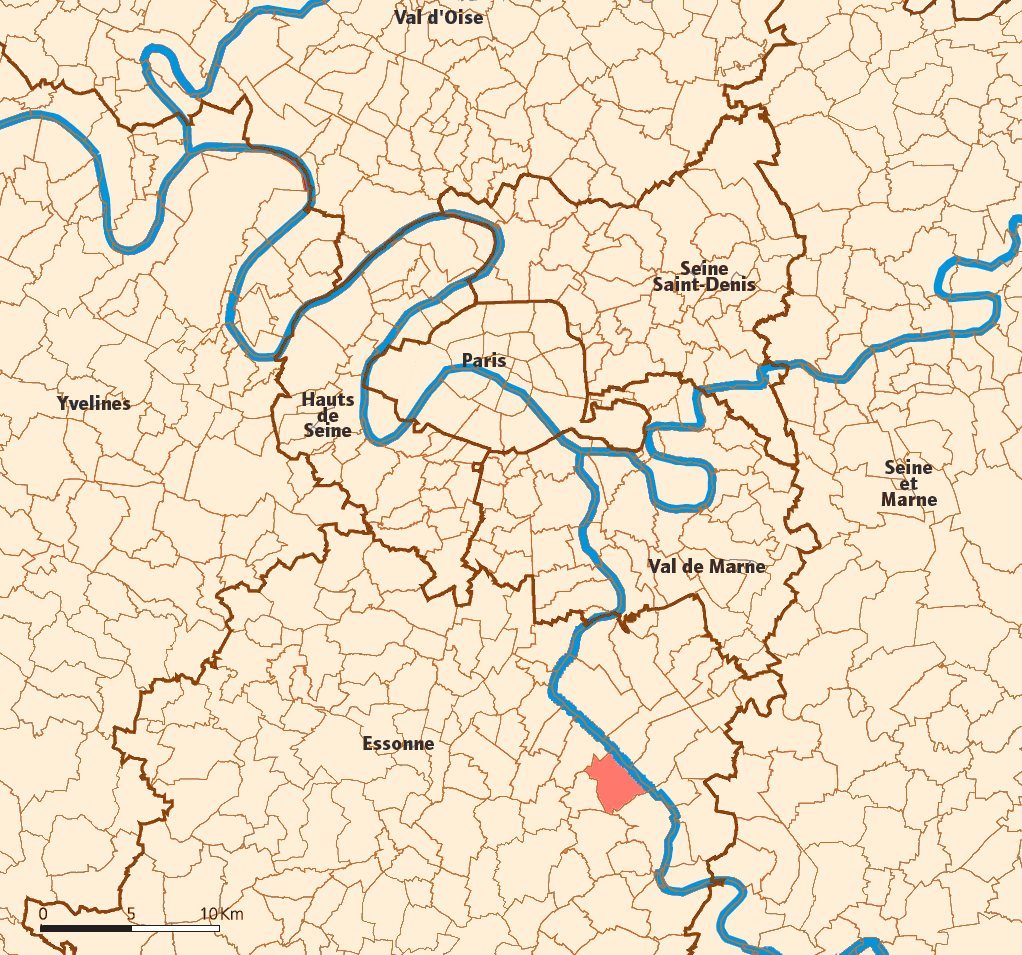 Significant nearby communes include , , , , and .

Originally the commune was called "Évry-sur-Seine" (meaning "Évry upon "). The name Évry comes from the Gallic name "Eburacon" or "Eburiacos", meaning "land of Eburos" (a ), perhaps the leader of a Gallic tribe in the area before the conquest of by the Romans. After the conquest, the name was corrupted into "Apriacum", then "Avriacum", and later "Evriacum".

In the name of the commune was changed into "Évry-Petit-Bourg" at the request of entrepreneur Paul Decauville, owner of "Ateliers de Petit-Bourg", a large boiler works located in Évry and at the time the largest employer in the area. The factory owed its name to the hamlet of Petit-Bourg (one of the three hamlets on the territory of Évry) where it was built.

On , the name of the "commune" was shortened into Évry only. Évry had just been chosen to become a "new town" of the suburbs of Paris, destined to host tens of thousands of suburbanites, and so the name "Petit-Bourg" (literally meaning "little borough, small town" in modern French, although etymologists think that this name was in fact the corruption of an old Gallic word with a totally different meaning) was deemed too old fashioned and improper for the new large suburban city of Évry to be built.

In Évry became part of the French initiative and took its current name. Before it was known as Évry-Petit-Bourg and had a population of only a few thousand.

When Évry was built Orly was the N°1 international airport of and many international companies such as Digital, , and established their head offices in Évry. However, with the expansion of Charles de Gaulle Roissy airport, all the larger companies have moved out causing the downfall of the many smaller service companies which catered to the lunchtime needs of the thousands of staff which were either displaced or made redundant.

Amongst the few international companies remaining are the hotel and catering firm of , and the supermarket chain of . Although both have a postal Cedex address in Évry, geographically they are in .

The town has tried to counteract this exodus by increasing the capacity of the commercial center, the to 286 shops, mostly selling the same wares (53 ready made women's wear, 19 shoe shops, 18 men's wear, 14 children's wear, 14 jewellers, 12 mobile phone shops, 9 opticians, and 30 restaurants and snack bars). The car parks were destined to be "pay by the hour" but in view of the lack of trade, the idea has been shelved notwithstanding the expense of installing the barriers and pay points.Another measure taken by the local authorities has been to declare certain quarters a "zone franche" which means that businesses starting up in these areas are exempt from along with many other social benefits and aids which makes Évry an attractive town for future "entrepreneurs".

The Cathedral of the Resurrection, dedicated to is one of the few 20th century cathedrals built in a truly modern style (see also 1962, 1967). The total cost was 13.72M€. The total surface is 1,600m² and is 34m high. It can receive 1,400 people. made a visit on , , and although car parks were requisitioned as far away as , apart from invited guests, less than 500 people turned out for the event, which means that Évry maybe holds the world record for the smallest crowd at a papal appearance. It is planned that will make a visit in 2009. The festival of St Corbinien in Evry on the 6/7 september 2008, was presided by Monseigneur , archbishop of .

In 2003, the socialist , Manuel Valls, (born , in , ) and who is also the deputé () and a qualified (), finally embarked upon a massive safeguard plan designed to entirely renovate the more defavourised areas which includes much demolition of the obsolete 1960s buildings (especially in the "Pyramides" quarter, once the French equivalent of the ), and the upgrading of the more recent residential structures and schools. 2006 will see the final renovation of the "Collège des Pyramides" at the cost of 11.43M€ (the price of a new school) and will receive 571 pupils. In 2007, enlargement and renovation will begin on the Lycée des Loges. The work will last 3 years without interruption of lessons and the budget is set at 40M€.

On , , in the Sénat during the 14th ceremony of the "Prix du Trombinoscope 2005" (press awards), Manuel Valls was elected "Local Representative of the Year." With the heavy defeat of the Socialists on the national scale during the 2007 elections, Manuel Valls has taken a prominent position in the party and has been given the nickname of "Le Sarko de la gauche" (the left wing Sarkozy).

During the municipal elections, Manuel Valls was returned to office as mayor on the first round with 70.3% of the vote which gave him the highest national score for a first round ballot, making Evry the safest Socialist commune in France.

Évry is demographically the youngest town in France. The average age of the population is only 26 years. On the , over 6,600 children began a new academic year in the town's 42 schools which have received a renovation grant of 620,000€. In 2008, the town will consecrate 10M€ on education; (3,300 meals are served daily in the school canteens and the town has spent 96,000€ on classroom accessories. Not including teaching staff, 350 auxiliaries are employed looking after the 3-11 year old children along with 6 educateurs specialised in sport.)

At the other end of the age span, Évry has only three residences for old folk and the cemetery, proportionally small compared to towns with similar a population figure, is closed to further inhumations. Burials are now carried out at the Garenne cemetery in nearby where a has also recently been built.

5 paediatricians are established in Evry along with paediatric units in the hospital and in the two private clinics, whereas no funeral parlours or morticians exist in the town of Evry.

Évry is the "" (capital) of the "département". It is also the official seat of the , although in reality the "" buildings and administration are located in the neighboring commune of .

Évry has the following religious edifices (in descending order of attendance):

There is also a very strong presence of in Évry with a new on the Route Nationale 7 nearly opposite the pagoda.

The with its 5,525m² is one of the largest in Western Europe, and is of Moroccan architecture. The minaret is 25m tall. It has a large prayer room and can accommodate a total of 5.000 people. Islam in France is growing, and currently, there are around 5 million Muslims in France's 63 million general population. Évry presents a place of much "multiculturalism" yet problems rarely arise. The construction of the mosque was mostly funded by King Fahd of and the interior decoration by the Moroccan king Hassan II. The total cost was 6.8M€. Although the true story of the kidnapping and death of Ben Barka is still a mystery, many people believe he is buried either under the mosque or in the nearby forest of La Garenne.Fact|date=April 2008

The Pagoda Khan-Anh will be the largest in Europe (3,287m²) and will accommodate 1,500 people. The initial cost was estimated at 7.6M€ but is expected to have doubled by the end of the construction. Work began in 1996 and is expected to be completed in 2009. The statue of Buddha, 4 metres tall and weighing 5 tons, arrived from on the . The pagoda will be the headquarters of the European Buddhist Congregation and will be a training school for future monks and nuns. The consecrated the edifice on . He made a speech in English which was translated by interpreters into French and Vietnamese. 1,500 adepts were admitted into the grounds coming from as far away as Canada but only 500 visitors watched the ceremony on a giant screen erected in the nearby park. Pagoda: [http://cathedrale-evry.net/images/pagode.jpg]

The following political parties have a permanent base in Évry:

Towards the end of the war General Patton crossed the with his tanks at Évry en route from going to the where he fought the . The anniversary of the liberation of Évry on the , is celebrated annually at the Patton Memorial

Although Évry is a modern "new town," which is generally synonymous with "concrete jungle," 50% of its surface area is parkland and open space. The main thoroughfares are very wide avenues and trees are to be found everywhere. In the nationwide intercommunal competition "Ville Fleurie" (flowered town) Évry has been awarded the high status of "3 flowers," usually won by country villages. To encourage this aspect of the town an annual "Balcon Fleuri" (flowered balcony) competition is held. A similar balcony competition is held each December for the best exterior Christmas decorations.

Some people consider the modern cathedral as an architectural beauty while others liken the design to that of a .

Évry is the home of the European space project Ariane, at the Centre National d'Études Spatiales (CNES).

Évry is twinned with the in . This is because, originally, Évry was designed to be a predominantly management and executive class town. Today, however, Évry resembles and has little in common with Bexley. Fact|date=April 2007

The Agglomération d'Évry has twinning pacts with in ; and the camp of in the . (Maison du Monde, 509, Patio des Terrasses, Évry, sharing the address with a branch of ).

The latest addition to the overseas contacts is a "parrainage" (godfather) pact with in .