Michener was born and educated in Alberta, where, after serving briefly in the Royal Air Force,[1] he acquired a university degree. He then attended the University of Oxford as a Rhodes scholar, playing hockey there, and obtaining his two masters degrees. Subsequently, Michener returned to Canada and worked as a lawyer before entering politics, first in the provincial sphere and later in the federal; Michener was elected to the House of Commons in 1957, where-after he served as speaker of the house until 1962, and then in diplomatic postings between 1964 and 1967. He was that year appointed as governor general by Elizabeth II, Queen of Canada, on the recommendation of Prime Minister of Canada Lester B. Pearson, to replace Georges Vanier as viceroy, and he occupied the post until succeeded by Jules Léger in 1974. Michener proved to be a populist governor general whose tenure is considered to be a key turning point in the history of his office.

On October 15, 1962, Michener was sworn into the Queen's Privy Council for Canada,[2] giving him the accordant style of The Honourable; however, as a former governor general of Canada, Michener was entitled to be styled for life with the superior form of The Right Honourable. He subsequently served on various corporate and charitable boards and sat as Chancellor of Queen's University before he died on August 6, 1991.

Michener was born in Lacombe, Alberta, to Senator Edward Michener and Mary E. Roland.[3][4] He attended the University of Alberta, where he achieved not only his Bachelor of Arts degree, but also a Rhodes Scholarship that took him to Hertford College at the University of Oxford. There, he played for the Oxford University Ice Hockey Club, and met a man who was to become influential and Michener's lifelong friend, Lester B. Pearson. After completing both his Master of Arts and Bachelor of Civil Law degrees,[1] Michener returned to Canada, settling in Toronto and practicing law. At the same time, he sat on the Executive Council of Ontario, acted as the General Secretary for the Rhodes Foundation in Canada between 1936 and 1964, and sat as chairman of the Manitoba Royal Commission on Local Government.[1]

Michener first ran for political office in Ontario's 1943 election as the Progressive Conservative candidate in the riding of St. David, but was defeated by William Dennison of the Ontario Co-operative Commonwealth Federation. Michener made an attempt to win the district again in the election that followed in 1945, and was successful in defeating Dennison, taking his seat in the Legislative Assembly. Michener was subsequently appointed by Lieutenant Governor Albert Edward Matthews to the Executive Council, acting on the advice of his premier, George Drew, who gave Michener the position of Provincial Secretary and Registrar of Ontario, tasked with formalising cabinet procedures, including agenda and minutes. However, after Dennison was again victorious in the 1948 provincial election, Michener decided to leave provincial politics for the federal variant.

The 1949 federal election was Michener's first try for the House of Commons in Ottawa, but, as with his first attempt at the Ontario legislature, he was unsuccessful. It was not until the election of 1953 that Michener finally was elected as a the Progressive Conservative (PC) Member of Parliament for St. Paul's. Three years later, the PC party elected at its leadership convention John Diefenbaker as leader, who subsequently led the Tories to a minority win in the election of 1957, and was appointed as prime minister. Though Michener was not offered a seat in the Cabinet, he was appointed speaker of the house, after the post was turned down by Stanley Knowles.

From this position, Michener angered Diefenbaker by allowing the loyal opposition a great degree of latitude during Question Period, so much so that at one point, on May 25, 1959, Diefenbaker became so flustered that he refused to sit down when called to order by Michener. Actions like these, among others, impressed parliamentary observers, and a group of university professors initiated a campaign to make Michener's position as speaker permanent; they proposed that, as is the tradition with the Speaker of the British House of Commons, Michener run as an independent in general elections, and that the political parties agree not to run candidates against him. Such an agreement, however, failed to materialize, and when Michener ran for re-election in the 1962 race, he was defeated. This was the first time since 1867 that a speaker had lost his riding in an election in which his party formed the government. After Diefenbaker declined to advise the Governor General to summon Michener to the Senate, the latter returned to Toronto and dedicated his time to his law practice, Lang Michener LLP.

It was in the 1963 federal election that the Liberal Party was victorious, and its leader, who was thus appointed prime minister, was Michener's old friend from Oxford, Lester Pearson. Just over one year later, Pearson advised Governor General Georges Vanier to appoint Michener to the diplomatic post of high commissioner to India,[5] which Michener took up on July 9, 1964, six months before he was also made Canada's first high commissioner to Nepal.[6] While stationed on those foreign duties, Michener received overtures from the Prime Minister that the would be considered among the leading candidates for the governor generalship when he returned to Canada. But Vanier was in deteriorating health, and though he offered to stay on as viceroy through to the end of the Canadian Centennial celebrations, Pearson was not comfortable in advising Queen Elizabeth II to allow it. The night after he conferred with his prime minister about that matter, on March 5, Vanier died at Rideau Hall, leaving Chief Justice Robert Taschereau as Administrator of the Government in the absence of a viceroy. 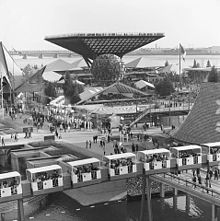 Expo 67, officially opened by Michener ten days after being sworn in as governor general

Michener was immediately recalled from India and it was on March 29, 1967 announced from the Office of the Prime Minister that the Elizabeth II had, by commission under the royal sign-manual and Great Seal of Canada, approved Pearson's choice of Michener to succeed Georges Vanier as the Queen's representative.[7] Despite being a Conservative, Liberal members of parliament and cabinet ministers welcomed the selection of Michener; Paul Martin Sr. said "I don’t think there was anybody inside or outside the public service who could qualify better than Michener... People just felt that this was a good appointment."[8] Michener was subsequently sworn-in during a ceremony in the Senate chamber on April 17, that year, leaving one of the shortest periods where an individual has been governor general-designate.

The hurry did not end there, as, only ten days after Michener was made viceroy, he officially opened that year's World's Fair, Expo 67, which was held in Montreal. The fair, combined with the 100th anniversary of Confederation, attracted some 53 heads of state, as well as numerous other dignitaries, to visit Canada, and, as per diplomatic protocol, it was Michener, as the representative of Canada's head of state, who greeted and held audience with each of them. Among this litany of guests was United States president Lyndon B. Johnson, Grace, Princess of Monaco, Jacqueline Kennedy, Emperor Haile Selassie, and French president Charles de Gaulle. Michener welcomed the latter when he landed at his first stop in Canada, Quebec City,[9] where the president addressed the gathered crowd, and they cheered wildly for him in return, but booed and jeered Michener. 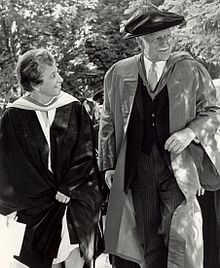 Michener attending the graduation ceremonies at Alma College in 1972

Beginning in 1963, the Front de libération du Québec (FLQ) became active in detonating some 95 bombs around Montreal,[10] resulting in multiple arrests, which then led to the October Crisis in October, 1970. On the 5th of that month, FLQ members kidnapped British trade commissioner James Cross and, five days later, did the same to Quebec's minister of labour, Pierre Laporte. However, in 2010, it was revealed through interviews conducted with 12 of those involved in the kidnappings, including Jacques Lanctôt and Jacques Rose, done for a documentary aired on Tout le monde en parle, that Michener had originally been their intended target; the FLQ leaders allegedly planned to commandeer the Canadian Broadcasting Corporation's Télévision de Radio-Canada and conduct a 24 hour telethon with the Governor General bound in a chair as a prop on the stage.[11] Ultimately, with the two officials missing, Michener, as Governor-in-Council, invoked the War Measures Act, and Quebec police, with the support of the Canadian Forces, rounded up hundreds of individuals, leading to the detention of the kidnappers and their accomplices.

On July 1, 1967, the Order of Canada was created, with Michener becoming the order's first member, as well as the first chancellor and principal companion.[12] As such, he presided over the first investiture ceremony, at Rideau Hall on July 9, investing 90 people into the order, and, on a later visit to London, United Kingdom, he presented the sovereign of the order's insignia to Queen Elizabeth II.[13] Similarly, on July 1, 1972, the Order of Military Merit was founded, and Michener was appointed the first chancellor and commander.

Another first was Michener's state visit in 1971 to Trinidad and Tobago; while King George VI and Queen Elizabeth II had both carried out state visits on behalf of Canada, no Canadian governor general had ever previously undertaken such a trip. Then, in October of the same year, the Governor General was off to Iran to attend the Iranian monarchy's 2,500 year anniversary. These voyages initially caused controversy among diplomatic insiders in Ottawa, who viewed it as inappropriate for someone who was not technically the country's head of state to undertake a state visit. However, the successes of the trip helped end the controversy, and established a precedent thereafter followed in Canada, and adopted by other Commonwealth realms.

Though he wore for state occasions the elaborate court dress of the Windsor uniform, Michener discontinued the practice of women curtseying before the governor general, a move that was rumoured to have been inspired by the refusal of Maryon Pearson, wife of Prime Minister Lester Pearson, to give such deference to her long-time friends.[14] Further, he fostered links between his position and his provincial counterparts by initiating periodic meetings with the lieutenant governors of the provinces, starting in 1973. He was, however, criticized for not reacting to Pierre Trudeau's "contemptuous musings" about the Crown and the governor general.[14]

Michener, as governor general, created two awards to be bestowed on Canadians: reflecting his interest in sport fishing, he formed the Michener Tuna Trophy, and, in demonstration of his strong relationship with many reporters and journalists, he founded in 1970 the Michener Award for Journalism. In return, besides being bestowed with a number of honours by both the Queen-in-Council and private organisations, Michener became the second of only two Canadians, after former governor general Vincent Massey, to be presented with the Royal Victorian Chain, a personal gift of the monarch, awarded to him by Queen Elizabeth II for his service.

After his term as governor general, Michener and his wife moved to Toronto. Michener remained active in business throughout the country, serving on boards of directors and promoting Canadian charities and cultural institutions, and, from 1973 to 1980, sat as Chancellor of Queen's University, while also promoting physical activity to school children and seniors alike. To provide an example to follow, at the age of 80 he climbed to the peak of Alberta's Mount Michener, to participate in the ceremony marking the Alberta Crown-in-Council's naming of the mountain after Michener. In 1990, he also agreed to allow his name to be used by The Michener Institute.[1]

In the mid-1980s, Michener became a caretaker for his wife after she was afflicted with Alzheimer's disease. She died in Toronto on January 12, 1987,[15] and Michener followed on August 6, 1991. St. Bartholomew's Anglican Church in Ottawa, directly across Sussex Drive from Rideau Hall, is the repository of the couple's ashes.