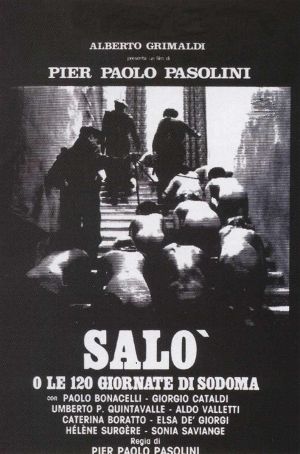 
"Salò o le 120 giornate di Sodoma" ("Salò or the 120 Days of Sodom") is a controversial written and directed by Italian director with uncredited writing contributions by [http://cinebeats.blogsome.com/category/pupi-avati/] [http://www.dvdtalk.com/dvdsavant/s765house.html] . It is based on the book "" by the .

Because of its scenes of intensely sadistic graphic violence, the movie was extremely controversial upon its release, and remains banned in several countries to this day. It was Pasolini's last film; he was murdered shortly before "Salò" was released.

"Salò" transposes the setting of De Sade's book from 18th century France to the last days of 's regime in the Republic of Salò. However, despite the horrors that it shows (, , and ), it can barely touch the perversions listed in the book, which include extensive sexual and physical abuse of children.

While the book provides the most important foundations of "Salò", the events in the movie draw as much on Pasolini's own life as on de Sade's novel. Pasolini spent part of his early twenties in the Republic of Salò. During this time he witnessed a great many cruelties on the part of the Fascist collaborationist forces of the Salò Republic. Pasolini’s life followed a strange course of early experimentation and constant struggle. Growing up in and , Pasolini was introduced to many leftist examples in mass culture from an early age. He began writing at age seven, heavily under the influence of French poet . His writing quickly began to incorporate certain aspects of his personal life, mainly dealing with constant familial struggles and moving from city to city.

After studying major literary giants in high school, Pasolini enrolled in the for further education. Many of his memories of the experience led to the conceptualization of "Salò". He also claimed that the film was highly symbolic and ; for instance, that the scenes were an indictment of mass-produced foods, which he labeled "useless refuse."

Although his career, in both film and literature, was highly prolific and far-reaching, Pasolini dealt with some major constants within his work. His first published novel in dealt with the concept of pimps and scandals within a world of prostitution. The reception of this first novel, titled "", created much and brought about subsequent charges of obscenity.

One of his first major films, "" (), dealt with similar issues and was also received by an unwelcoming audience, who demanded harsher codes of . It is hard to quickly sum up the vast amount of work which Pasolini created throughout his lifetime, but it becomes clear that so much of it focused around a very personal attachment to subject matter, as well as overt sexual undertones.

"Salò" (the film's common abbreviation) occurs in the Republic of Salò, the Fascist established in the Nazi-occupied portion of Italy in 1944. The story is in four segments loosely parallel to Dante's "Inferno": the Anteinferno, the Circle of Manias, the Circle of Feces, and the Circle of Blood.

Four men of power, the (Duc de Blangis), the , the (Curval), and the agree to marry each other's daughters as the first step in a debauched ritual. With the aid of several collaborator young men, they kidnap eighteen young men and women (nine of each sex), and take them to a palace near . Accompanying them are four middle-aged s, also collaborators, whose function in the debauchery will be to recount erotically arousing stories for the men of power, and who, in turn, will sadistically exploit their victims.

The story depicts the many days at the palace, during which the four men of power devise increasingly abhorrent s and humiliations for their own pleasure. A most infamous scene, shows a young woman forced to eat the of the Duke; later, the other victims are presented a giant meal of human feces. At story's end, the victims who chose to not collaborate with their fascist tormentors are gruesomely murdered: , branding, tongue and eyes cut out; (see ). The viewer is distanced from the grossest tortures, because they are viewed through binoculars. The story's final scene — two young, macho soldiers dancing a waltz, together — embodies Pasolini's vision of life and death: unflinching, dispassionate, yet, humane and (paradoxically) impassioned.

The film's treatment of sexuality

A persistent theme in "Salò" is the degradation and modification of the human body. Throughout the story, the human body is reduced to something of lesser value than a person &mdash; for example, never does a sexual encounter occur in private.

"Salò" has been referred to as a film presenting the "death of sex", a "funeral dirge" of eroticism amidst of sex's mass commercialization. [Musatti 1982, 131; Chaper 1975-6, 116.] Although men and women are naked throughout the story, sexual intercourse mostly is presented as an act of degradation. Thus, one of the libertines makes love to a guard, then goes to inspect the captive teenagers. When he finds two women making love (in violation of the libertines' laws), they reveal that another guard has been sleeping with a maid. The libertines then seek and kill the guard and the maid. "Salò's" depiction of sexual intercourse contrasts with that in pornography and erotic cinema: Pornography presents sexual intercourse as lusty and joyful, using foreplay to mark sexual acts as passionate and exciting. "Salò" presents sexual intercourse as pain, and deliberately avoids cinematic foreplay, leaving the sex acts as devoid of romantic allure and intrigue. Sexual relations may also be described as pointless; they are certainly not pleasurable.

Several versions of the film exist, "Salò" originally ran 145 minutes, but director Pasolini himself removed 25 minutes for story pace. The longest available version is the DVD published by the BFI, containing a short scene usually deleted from other prints, in which during the first wedding one of the masters quotes a poem. This version of the film is featured both on the original 2001 DVD release and the remastered 2008 DVD and Blu-ray. Since the remastered version was sourced from the original negative, which does not include the poetry reading, the additional footage was sourced from a 35mm print of the film held by the BFI National Archive. A note in the DVD booklet explains that this leads to a slight shift in picture quality. Aside from the high-definition transfer, the 2008 BFI releases are identical - the apparent five-minute difference in running time is explained by the Blu-ray running at the theatrical speed of 24 frames per second, while the DVD has been transferred at the slightly faster PAL video rate of 25 frames per second.

In the U.S., "Salò" suffers intermittent legal troubles. and DVD editions were released for North America; however, the DVD was quickly withdrawn because of licensing conflicts with Pasolini's estate. As a resultant, Criterion's 1998 DVD release of the film created much collector's interest, because of its rarity — dubbed "The Rarest DVD in the world", whilst many discontinued Criterion titles are much sought, "Salò" original DVDs command prices ranging from $250 to $1,000 American dollars. Moreover, its rarity inspired bootleg copies sold as original pressings. The quality of the genuine "Salò" DVD is inferior, by contemporary standards; most notably, the image has a green tinge.

Besides the BFI edition with the often missing poetry-quotation scene (and better than Criterion's edition), there exists a French DVD version, distributed by Gaumont Columbia Tristar Home Video, containing a transfer that is a restored, high-definition, color-corrected version of the film (superior to the Criterion "and" BFI editions), however, it has no English subtitles, as it is a French product for French cinemaphiles.

The Hawaii film company released an NTSC-format "Salò" through distributor in 2007. It reportedly contains the uncut Criterion Collection release — yet of better quality. The HK Flix edition is an version of the BFI's "Salò" DVD, complete with a factory imperfection at the film's 01:47:19 mark, however, its quality is unequal to that of the Gaumont DVD, and, still, it "is" missing a scene. The DVD cover is a sketch of Pasolini in sunglasses; 's name is printed beside it. Moreover, despite accusations of boot-legging, Euro Cult assert their legal entitlement to distribute the "Salò" DVD in the U.S.

In August 2008, the BFI announced a new release of "Salò" on both high-definition and standard-definition DVD, claiming it to be "fully uncut and in its most complete version", and that "the film has been re-mastered from the original Italian restoration negatives" and would be accompanied by a second disc containing extensive additional features. [ [http://filmstore.bfi.org.uk/acatalog/info_9762.html BFI Salò, or the 120 Days of Sodom Blu-ray and DVD] ] The BFI re-issue does indeed contain the missing 25 second poem intact. The films transfer differs from the Criterion release as colours are more subtle without contrast boosting, like the Criterion re issue.

To date, "Salò" remains controversial, with many praising the film's fearlessness and willingness to contemplate the unthinkable, while othersFact|date=September 2008 roundly condemn it for being little more than a pretentious exploitation movie. "Salò" has been banned in several countries, because of its graphic portrayals of , and — mainly of people thought to be younger than eighteen years of age. The film's legality has been questioned — namely, whether or not the actors and actresses who enacted simulated sex and violence in the film were of the .Fact|date=September 2008 The fact that "Salò" is set in a Fascist period makes many of the sadomasochistic aspects of the film more difficult to bear than in de Sade's original novel. The setting and the emphasis upon perverse consumption connects the brutality of Fascism to what Pasolini saw as the brutalizing effects of the modification of sexuality under .

"Salò" was banned in Australia in 1976, then made briefly legal in 1993 until its re-banning in 1998. [ [http://libertus.net/censor/odocs/lane9803salo.html Salo is re-banned (in Australia), by Terry Lane, March 98 ] ] [ [http://www.refused-classification.com/Films_Salo.htm Salo - 120 Days of Sodom | Refused-Classification.com ] ] In 1994, an undercover policeman, in Cincinnati, Ohio, rented the film from a local gay bookstore, and then arrested the owners for "pandering". A large group of artists, including and , and scholars signed a legal brief arguing the film's artistic merit; the case was dismissed on a technicality. [ [http://www.theroc.org/roc-mag/textarch/roc-19/roc19-05.htm ACLU Arts Censorship Project Newsletter] ] For a time, "Salò" was unavailable in many countries; it is now available, uncut, on in the , , , , the , , , , , , , , and ; however, in Sweden, the film was never banned or cut. Culturally, "Salò" was voted "The Most Controversial Film Ever Made" by readers in a 2006 readers' poll by "" magazine.Fact|date=September 2008Salo was re submitted for classification in Australia in 2008, only to be rejected once again [http://www.brisbanetimes.com.au/news/national/sadistic-sex-movie-ban-attacks-art-expression/2008/07/19/1216163226456.html] . The DVD print was apparently a modified version, causing outrage in the media over censorship and freedom of speech.

Documentaries about the film

An exhibition of photographs by depicting scenes which were edited out of the film was displayed in 2005 in .

Italian filmmaker released a documentary in 2006, "Pasolini prossimo nostro", based on an interview with Pasolini done on the set of "Salò" in 1975. The documentary also includes photographs taken on the set of the film.

The film is also the subject of a 2001 documentary written and directed by .

The film is regarded a masterpiece in some quarters. Acclaimed director named the film one of his ten favorite films when he voted for the 2002 poll, director Catherine Breillat and film critic Joel David also voted for the film [http://www.bfi.org.uk/sightandsound/topten/poll/voted.php?film=Sal%C3%B2%20(Pasolini)] . In a 2000 poll of critics conducted by the named it the 89th greatest film of the 20th century [http://www.filmsite.org/villvoice.html] . In 2006, the named Salo the 65th scariest film ever made [http://www.filmspotting.net/top100.htm] .