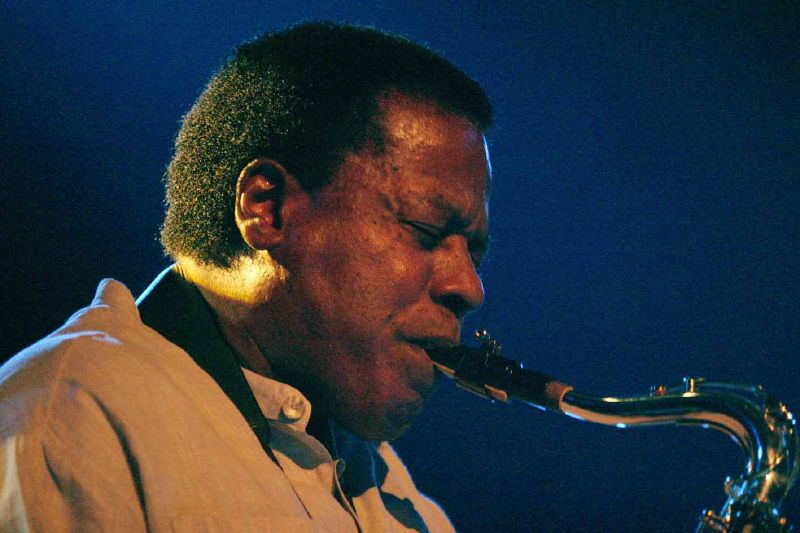 Wayne Shorter (born ) is an American and , commonly regarded as one of the most important American jazz saxophonists and composers since the 1960s.

Shorter has recorded dozens of s as a leader, and appeared on dozens more with others including 's Jazz Messengers in the late 1950s, second great quintet in the 1960s and the jazz-rock fusion band , which Shorter co-led in the 1970s. Many of his compositions have become standards.

Shorter was born in Newark, , and attended . [ [http://www.nps.k12.nj.us/arts/a_brief_history.htm A Brief History] , Newark Arts High School. Accessed , .] He loved music, being encouraged by his father to take up the as a teenager (his brother Alan became a ). After graduating from in 1956 Shorter spent two years in the U.S. Army, during which time he played briefly with . After his discharge from the army he played with . It was in his youth that Shorter was given the nickname " Mr.Gone", which would later become an album title for . [ [http://www.bigtakeover.com/reviews/weather-report-forecast-tomorrow-columbia-legacy The Big Takeover: Weather Report - Forecast: Tomorrow (Columbia Legacy) : ] ]

In 1959 Shorter joined and the Jazz Messengers. He stayed with Blakey for five years, and eventually became musical director for the group.

When finally left Miles Davis' band in 1960 to pursue his own group(after previously trying to leave in 1959), Coltrane proposed Wayne Shorter as a replacement but Shorter was unavailable and Davis went with on tenor followed by a revolving door of , , and . In 1964, persuaded Shorter to leave Blakey and join his quintet alongside , and . Miles' quintet with Shorter is considered by many to have been Davis's strongest working group. Shorter composed extensively for Davis ("Prince of Darkness", "ESP", "Footprints", "Sanctuary", "Nefertiti", and many others; on some albums he provided half of the compositions), typically hard-bop workouts with spaced-out long melody lines above the beat.

Herbie Hancock had this to say of Shorter's tenure in the group: "The master writer to me, in that group, was Wayne Shorter. He still is a master. Wayne was one of the few people who brought music to Miles that didn't get changed." Davis said: "Wayne is a real composer. He writes scores, write the parts for everybody just as he wants them to sound. He also brought in a kind of curiosity about working with musical rules. If they didn't work, then he broke them, but with musical sense; he understood that freedom in music was the ability to know the rules in order to bend them to your own satisfaction and taste."

Shorter remained in Davis's band after the breakup of the quintet in 1968, playing on early recordings including "" and "" (both 1969). His last live dates and studio recordings with Davis were in 1970.

Until 1968 he played exclusively. The final album on which he played tenor in the regular sequence of Davis albums was "". In 1969 he played the on the Davis album "" and on his own "Super Nova" (recorded with then-current Davis sidemen and John McLaughlin). In live Davis recordings from summer 1969 to early spring 1970 he played both saxophones. By the early 1970s, however, he chiefly played soprano saxophone.

Simultaneous with his time in the Miles Davis quintet, Shorter recorded several albums for , featuring almost exclusively his own compositions, with a variety of line-ups, quartets and larger groups including Blue Note favourites such as . His first Blue Note album (of nine in total) was "Night Dreamer" recorded at 's studio in 1964 with , , and .

"JuJu" and "Speak No Evil" are two more well known recordings from this era. Shorter's compositions on these albums are notable for their use of:
*pentatonic melodies harmonised with s and complex harmonic relationships;
*structured solos that reflect the composition's melody as much as its harmony;
*long rests as an integral part of the music, in contrast with other, more effusive, players of the time such as John Coltrane. Indeed the rhythm section on "Night Dreamer" included and of Coltrane's classic quartet that had recorded "" the previous year.

The later album "The All-Seeing Eye" was a free-jazz workout with a larger group, while "Adam's Apple" of 1966 was back to carefully constructed melodies by Shorter leading a quartet. Then a sextet again in the following year for "Schizophrenia" with his Miles Davis band mates Hancock and Carter plus trombonist , alto saxophonist/flautist and strong rhythms by drummer . These albums have recently been remastered by .

Shorter also recorded occasionally as a (again, mainly for Blue Note) with,, , , , , and bandmates Hancock and Williams.

Following the release of his "Odyssey Of Iska" album in 1970, Shorter along with (also a veteran of the Miles Davis group) formed the fusion group . The other original members were , percussionist , and . After Vitous' departure in 1973 Shorter and Zawinul co-led the group until the band's break up in late 1985. A great variety of excellent musicians that would make up Weather Report alumni over the years (most notably the revolutionary bassist ) helped the band produce many high quality recordings in varying styles through the years &mdash; with bebop, Latin jazz, ethnic music, and being the most prevalent denominators.

Shorter also recorded critically acclaimed albums as leader, notably "Native Dancer", which featured his Miles Davis band-mate Herbie Hancock and ian composer and vocalist . Shorter was to work with both of these musicians again later. He also contributed to several albums by . On the title track of 's 1978 album "Aja", he played a solo the critic who wrote the album's called "suitable for framing" (meaning 'beautiful' rather than 'wooden').

Concurrently, in the late 1970s and the early 1980s he toured in the "V.S.O.P." quintet. This group was a revival of the 1960s Miles Davis quintet, except that filled the chair instead of Miles.

Performing on soprano and tenor saxophone, Shorter was also cast as a 1950s jazz musician in 's 1986 film "Round Midnight".

After leaving Weather Report, Shorter continued to record and lead groups in styles, including touring in 1988 with guitarist . He has also maintained an occasional working relationship with Herbie Hancock, including a tribute album recorded shortly after Davis's death with Hancock, Carter, Williams and . He continued to appear on Joni Mitchell's records in the 1990s.

In 1995 Shorter released the album "High Life", his first solo recording for seven years. It was also Shorter's debut as a leader for . Shorter composed all the compositions on the album and co-produced it with the bassist . "" received the for best Contemporary Jazz Album in 1997.

Shorter would work with Hancock once again in 1997, on the much acclaimed and heralded album "1+1". The song "Aung San Suu Kyi" (named for the Burmese pro- activist) won both Hancock and Shorter a Grammy award.

Shorter formed his current band in 2000, the first permanent acoustic group under his leadership, a quartet with young musicians, , bassist , and drummer , playing his own complex compositions, many of them reworkings of tunes from his substantial portfolio going back to the 1960s. Two albums of live recordings featuring this quartet have been released ("" (2002) and "" (2005)). The quartet has received great acclaim from fans and critics, especially for the strength of Shorter's tenor saxophone playing. The Shorter biography "Footprints" by journalist contains an insight into the working life of these musicians as well as insight into Shorter's life, thoughts and Buddhist beliefs. "" received the 2006 for Best Instrumental Jazz Album.

Shorter's 2003 album "Alegria" (his first studio album for ten years, since "High Life") received the 2004 for Best Instrumental Jazz Album; it features the quartet with a host of other musicians, including pianist , drummer and former Weather Report percussionist . Shorter's compositions, some new some reworked from his Miles Davis period, feature the complex Latin rhythms that Shorter specialised in during his Weather Report days.

Shorter's wife Ana Maria and their niece Dalila were both killed on in 1996, and he married Carolina Dos Santos, a close friend of Ana Maria, in 1999. Shorter is a Nichiren Buddhist and a member of .