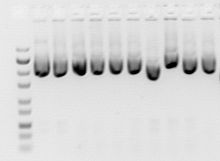 Growth of the bacterial culture

Plasmids are almost always purified from liquid bacteria cultures, usually E. coli, which have been transformed and isolated. Virtually all plasmid vectors in common use encode one or more antibiotic resistance genes as a selectable marker (Ex :kanamycin,Ampicillin), which allows bacteria that have been successfully transformed to multiply uninhibited. Bacterials are grown under favourable conditions.

Harvesting and lysis of the bacteria

When bacteria are lysed under alkaline conditions both DNA and proteins are precipitated. Some scientists reduce the concentration of NaOH used to 0.1M in order to reduce the occurrence of ssDNA. After the addition of acetate-containing neutralization buffer the large and less supercoiled chromosomal DNA and proteins precipitate, but the small bacterial DNA plasmids can renature and stay in solution.

Kits are available from varying manufacturers to purify plasmid DNA, which are named by size of bacterial culture and corresponding plasmid yield. In increasing order, these are the miniprep, midiprep, maxiprep, megaprep, and gigaprep. The plasmid DNA yield will vary depending on the plasmid copy number, type and size, the bacterial strain, the growth conditions, and the kit.

Minipreparation of plasmid DNA is a rapid, small-scale isolation of plasmid DNA from bacteria. It is based on the alkaline lysis method invented by the researchers Birnboim and Doly in 1979. The extracted plasmid DNA resulting from performing a miniprep is itself often called a "miniprep". Minipreps are used in the process of molecular cloning to analyze bacterial clones. A typical plasmid DNA yield of a miniprep is 20 to 30 µg depending on the cell strain.

Addition of phenol/chloroform can dissolve and denature proteins, like DNase. This is especially important if the plasmids are to be used for enzyme digestion. Otherwise, smearing may occur in enzyme restricted form of plasmid DNA.