Soong May-ling
This is a Chinese name; the family name is Soong.

She was born in Hongkou District, Shanghai, China, on March 5, 1898, but some biographies use the year 1897 because Chinese tradition considers everyone to be one year old at birth.[3] She was the fourth of six children of Ni Kwei-tseng and Charlie Soong, a wealthy and connected businessman and former Methodist missionary from Hainan. May-ling's siblings were: Eldest sister Ai-ling, her older sister Ching-ling, her older brother T. V. and her younger brothers T.L. and T.A.[4]

Soong as a student at Wesleyan College circa 1910

In Shanghai, May-ling attended the McTyeire School for Girls with her sister, Ching-ling. Their father, who had been educated in the United States, arranged to have them further their education in the US in 1907. Initially, May-ling and Ching-ling attended a private school in Summit, New Jersey. In 1908, Ching-ling was accepted by her sister Ai-ling's alma mater, Wesleyan College, at the age of 15 and the two sisters moved to Macon, Georgia, to join Ai-ling. However, May-ling could neither gain permission to stay with her sister on campus as a family member nor could she gain acceptance as a student due to her young age. May-ling spent the subsequent year in Demorest, Georgia, with the family of Ai-ling's Wesleyan friend, Blanche Moss. Mrs. Moss took care of May-ling and enrolled her as an 8th grader at the Piedmont College. A year later, in 1909, Wesleyan's newly appointed president, William Newman Ainsworth, gave May-ling special permission to stay at Wesleyan and assigned her special tutors. In 1910, May-ling briefly attended Fairmount College in Monteagle, Tennessee.[5][6] May-ling was officially registered as a freshman at Wesleyan in 1912 at the age of 15. She then transferred to Wellesley College a year later to be closer to her older brother, T.V., who, at the time, was studying at Harvard. By then both her sisters had graduated and returned to Shanghai. She graduated from Wellesley as one of the 33 Durant Scholars on June 19, 1917, with a major in English literature and minor in philosophy. She was also a member of Tau Zeta Epsilon, Wellesley's Arts and Music Society. As a result of being educated in English all her life, she spoke excellent English, with a pronounced Georgia accent which helped her connect with American audiences.[7] 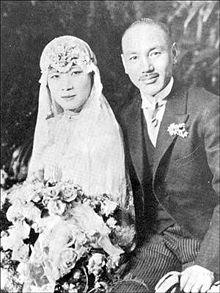 Soong May-ling met Chiang Kai-shek in 1920. Since he was eleven years her elder, already married, and a Buddhist, May-ling's mother vehemently opposed the marriage between the two, but finally agreed after Chiang showed proof of his divorce and promised to convert to Christianity. Chiang told his future mother-in-law that he could not convert immediately, because religion needed to be gradually absorbed, not swallowed like a pill. They married in Shanghai on December 1, 1927.[8] While biographers regard the marriage with varying appraisals of partnership, love, politics and competition, it lasted 48 years. The couple never had any children. 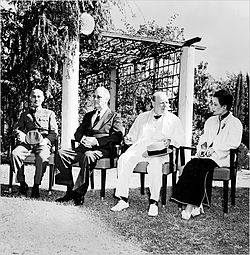 Madame Chiang initiated the New Life Movement and became actively engaged in Chinese politics. She was a member of the Legislative Yuan from 1930 to 1932 and Secretary-General of the Chinese Aeronautical Affairs Commission from 1936 to 1938. In 1945 she became a member of the Central Executive Committee of the Kuomintang. As her husband rose to become Generalissimo and leader of the Kuomintang, Madame Chiang acted as his English translator, secretary and advisor. She was his muse, his eyes, his ears, and his most loyal champion. During World War II, Madame Chiang tried to promote the Chinese cause and build a legacy for her husband on par with Roosevelt, Churchill and Stalin. Well versed in both Chinese and western culture, she became popular both in China and abroad. Her prominence led Joseph Stilwell to quip that she ought to be appointed minister of defense.

In 1931, Soong May-ling had a villa built for her on the east side of Nanjing. Located a few hundred meters east of the Sifangcheng Pavilion of the Ming Xiaoling Mausoleum, the villa still exists, and is commonly known as Meilinggong (美龄宫), "May-ling Palace".[10]

Though Soong May-ling initially avoided the public eye after marrying Chiang, she soon began an ambitious social welfare project to establish schools for the orphans of Nationalist soldiers. The children of Communist soldiers were not welcome. The orphanages were unusually well-appointed: with playgrounds, swimming pools, a gymnasium, model classrooms, and dormitories. Soong May-ling was deeply involved in the project and even picked all of the teachers herself. There were two schools- one for boys and one for girls- built on a thousand acre site at the foot of Purple Mountain, in Nanjing. She referred to these children as her "warphans" and made them a personal cause.[11] The fate of the children of fallen soldiers became a much more important issue in China after the beginning of the war with Japan in 1937. In order to better provide for these children she established the Chinese Women's National War Relief Society.[12] She made frequent mention of her "warphans" in her many campaigns for foreign military aid.

After losing to President Franklin Roosevelt in the 1940 US election, Republican candidate Wendell Willkie set out to travel the world in service to the US. During his visit to China, Madame Chiang Kai-Shek and Willkie took an interest in each other.

According to recollections by publisher Gardner Cowles, Willkie's visit to China involved an episode where Soong May-ling seduced Willkie and took him to one of her hideaway apartments in Chungking. At 4am, Cowles noted

"a very buoyant Willkie appeared, cocky as a young college student after a successful night with a girl. After giving me a play-by-play account of what had happened between him and Madame, he concluded that he had invited Madame to return to Washington with us."

But the next day, Willkie had Cowles tell Madame she could not travel to Washington with him after all. "She reached up and scratched her long fingernails down both my cheeks so deeply that I had marks for about a week,” Cowles wrote.[13]

Cowles’s account “raises questions.” wrote Jay Taylor in his biography of Chiang. Many Chinese in gossip hungry Chungking would have known of their time alone and rumors would have spread quickly. In 1974, when a shorter version of the story appeared, a suit was brought on behalf of Mayling, and Cowles testified (perhaps to protect Wilkie) that the affair was “impossible.” Taylor speculates that Wilkie, who had several drinks when he talked to Cowles, had exaggerated or misled his young friend who had imagined the rest.[14] In any case, none of the biographies mention eve rumors of any other sexual indiscretions

Soong May-ling wasn’t deterred for long, making it to the United States the next year. While in her suite at the Waldorf, she said to Cowles: “You know, Mike, if Wendell could be elected, then he and I would rule the world. I would rule the Orient and Wendell would rule the Western world.” She asked that he use whatever means necessary to secure the Republican nomination for Willkie, even if it required using China's wealth.[15]

Visits to the USA 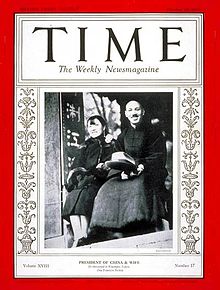 Soong May-ling made several tours to the United States to lobby support for the Nationalist's war effort. She drew crowds as large as 30,000 people and in 1943 made the cover of TIME magazine for a third time. She had earlier appeared on the October 26, 1931 cover along-side her husband and on the January 3, 1937 cover with her husband as "Man and Wife of the Year)" [16][17] Both husband and wife were on good terms with Time Magazine senior editor and co-founder Henry Luce, who frequently tried to rally money and support from the American public for the Republic of China. On February 18, 1943, she became the first Chinese national and second woman to address both houses of the U.S. Congress.

After the defeat of her husband's government in the Chinese Civil War in 1949, Madame Chiang followed her husband to Taiwan, while her sister Soong Ching-ling stayed on the mainland, siding with the communists. Madame Chiang continued to play a prominent international role. She was a Patron of the International Red Cross Committee, honorary chair of the British United Aid to China Fund, and First Honorary Member of the Bill of Rights Commemorative Society. Through the late 1960s she was included among America's 10 most admired women.

After the death of her husband in 1975, Madame Chiang assumed a low profile. Chiang Kai-shek was succeeded to power by his eldest son Chiang Ching-kuo, from a previous marriage, with whom Madame Chiang had rocky relations. In 1975, she emigrated from Taiwan to her family's 36 acre (14.6 hectare) estate in Lattingtown, Long Island, New York, USA, where she kept a portrait of her late husband in full military regalia in her living room.

Madame Chiang returned to Taiwan upon Chiang Ching-kuo's death in 1988, to shore up support among her old allies. However, Chiang's successor as president, Lee Teng-hui, proved to be more adept at politics than she was, and consolidated his position. As a result, she again returned to the U.S.

Madame Chiang made a rare public appearance in 1995 when she attended a reception held on Capitol Hill in her honor in connection with celebrations of the 50th anniversary of the end of World War II. Madame Chiang also made her last visit to Taiwan in 1995.

In the 2000 Presidential Election on Taiwan, the Kuomintang produced a letter from her in which she purportedly supported the KMT candidate Lien Chan over independent candidate James Soong (no relation). James Soong himself had never disputed the authenticity of the letter.

Soong sold her Long Island estate in 2000 and spent the rest of her life in a Gracie Square apartment on the Upper East Side of Manhattan owned by her niece. An open house of the estate drew many Taiwanese expatriates.

When Madame Chiang was 103 years old, she had an exhibition of her Chinese paintings in New York. To this date her work is not for sale. 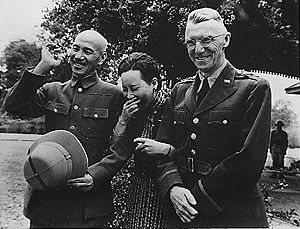 Soong died in her sleep in New York City, in her Manhattan apartment on October 23, 2003, at the age of about 105.[18] Her remains were interred at Ferncliff Cemetery in Hartsdale, New York, pending an eventual burial with her late husband who was entombed in Cihu, Taiwan. The stated intention is to have them both buried in mainland China once political differences are resolved.

As a fluent English speaker, as a Christian, as a model of what many Americans hoped China to become, Madame Chiang struck a chord with American audiences as she traveled across the country, starting in 1930s, raising money and lobbying for support of her husband's government. She seemed to many Americans to be the very symbol of the modern, educated, pro-American China they yearned to see emerge – even as many Chinese dismissed her as a corrupt, power-hungry symbol of the past they wanted to escape.[19] 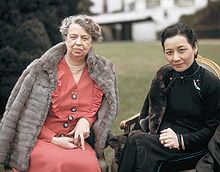 -Official statement upon her death