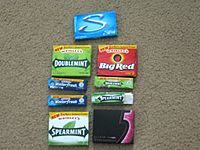 Many types of North American chewing gum from 2009.

Chewing gum is a type of gum traditionally made of chicle, a natural latex product, or synthetic rubber known as polyisobutylene. For economical and quality reasons, many modern chewing gums use rubber instead of chicle. Chicle is nonetheless still the base of choice for some regional markets, such as Japan.

Chewing gum in various forms has existed since at least 5,000 years ago at minimum the Neolithic period. 5,000-year-old chewing gum with tooth imprints, made of birch bark tar, has been found in Kierikki, Yli-Ii, Finland. The bark tar of which the gums were made is believed to have antiseptic properties and other medicinal advantages.[1] The ancient Aztecs used chicle as a base for making a gum-like substance. Women in particular used this gum as a mouth freshener.

Forms of chewing gums were also used in Ancient Greece. The Greeks chewed mastic gum, made from the resin of the mastic tree.[2] Many other cultures have chewed gum-like substances made from plants, grasses, and resins.

The American Indians chewed resin made from the sap of spruce trees.[3] The New England settlers picked up this practice, and in 1848, John B. Curtis developed and sold the first commercial chewing gum called The State of Maine Pure Spruce Gum. Around 1850 a gum made from paraffin wax was developed and soon exceeded the spruce gum in popularity. William Semple filed an early patent on chewing gum, patent number 98,304, on December 28, 1869.[4]

Modern chewing gum was first developed in the 1860s when chicle was exported from Mexico for use as a rubber substitute. Chicle did not succeed as a replacement for rubber, but as a gum it was soon adopted and due to newly established companies such as Adams New York Chewing Gum (1871), Black Jack (1884) and “Chiclets” (1899), it soon dominated the market.[5] Chicle gum, and gum made from similar latexes, had a smoother and softer texture and held flavor better. Most chewing gum companies have since switched to synthetic gum bases because of their low price and availability.

Sugar-free gum sweetened with xylitol has been shown to reduce cavities and plaque.[6] The sweetener sorbitol has the same goodness, but is only about one-third as effective as xylitol.[6] Xylitol is specific in its inhibition of Streptococcus mutans, bacteria that are significant contributors to tooth decay.[7] Xylitol inhibits Streptococcus mutans in the presence of other sugars, with the exception of fructose.[8] Daily doses of xylitol below 3.44 grams are ineffective and doses above 10.32 grams show no additional benefit.[9] Calcium lactate added to toothpaste has reduced calculus formation.[10] One study has shown that calcium lactate enhances enamel remineralization when added to xylitol-containing gum,[11] but another study showed no additional remineralization benefit from calcium lactate or other calcium compounds in chewing-gum.[12]

Other studies[13] indicated that the caries preventive effect of chewing sugar-free gum is related to the chewing process itself rather than being an effect of gum sweeteners or additives, such as polyols and carbamide.

Over 80% of cavities occur inside pits and fissures in chewing surfaces where food is trapped under chewing pressure and carbohydrate like sugar is changed to acid by resident plaque bacteria but brushing cannot reach.[citation needed]

Several randomized controlled studies have investigated the use of chewing gum in reducing the duration of post-operative ileus following abdominal and specifically gastrointestinal surgery. These suggest gum chewing, as a form of 'sham feeding', is a useful treatment therapy.[14]

Concern has arisen about the possible carcinogenicity of the vinyl acetate (acetic acid ethenyl ester) used by some manufacturers in their gum bases. Currently the ingredient can be hidden in the catch-all term "gum base". The Canadian government at one point classified the ingredient as a "potentially high hazard substance."[15] However, on January 31, 2009, the Government of Canada's final assessment concluded that exposure to vinyl acetate is not considered to be harmful to human health.[16] This decision under the Canadian Environmental Protection Act (CEPA) was based on new information received during the public comment period, as well as more recent information from the risk assessment conducted by the European Union.

One old wives' tale says that swallowed gum will remain in a human's stomach for up to seven years, as it is not digestible. According to several medical opinions, there seems to be little truth behind the tale. In most cases, swallowed gum will pass through the system as fast as any other food.[17] There have been a few cases where swallowing gum has required medical attention, but these cases are more or less related to chronic gum swallowers. One young boy swallowed several pieces each day and had to be hospitalized,[18] and another young girl required medical attention when she swallowed her gum and four coins, which got stuck together in her esophagus.[17] A bezoar is formed in the stomach when food or other foreign objects stick to gum and build up, causing intestinal blockage.[19] As long as the mass of gum is small enough to pass out of the stomach, it will likely pass out of the body easily.[citation needed]

Many schools do not allow chewing gum because students often dispose of it inappropriately.[20]

Singapore also had a ban on chewing gum because it was not disposed of properly.[21]

Effects on the Environment

Chewing gum is commonly stuck underneath benches and tables or to the surface of sidewalks, and is difficult to remove once dried. Chewing gum does not break down over time, making it also a potential hazard to the environment; thus gum is banned in Singapore[citation needed].