Moosonee is a town in northern Ontario, Canada, on the Moose River approximately 19 kilometres (12 mi) south of James Bay. It is considered as "the Gateway to the Arctic" and has Ontario's only saltwater port.[2] Nearby on Moose Factory Island is the community of Moose Factory to which it is connected by water taxi in the summer and ice road in the winter.

Moosonee is the railhead of the Ontario Northland Railway where goods are transferred to barges and aircraft for transport to more northerly communities. Moosonee is not particularly far north, being located at 51°N—which is roughly the same latitude as Saskatoon, Calgary, London, UK, and Berlin—but is isolated due to its lack of road access to the rest of Ontario. The community was the site of a fur trading post set up in 1903 by Révillon Frères, competitors to the Hudson's Bay Company which later bought out Révillon.

Moosonee formerly held the status of a Development Area, the only community in the province with that designation, and was governed by a locally elected board subject to formal appointment by the Ontario provincial government. It became incorporated as a town effective January 1, 2001, with an elected mayor and four person council. The most recent council took office on December 1, 2010 after being elected in the 2010 municipal elections on October 25, 2010. The mayor of Moosonee is Victor Mitchell and the councillors are Pauline Sackaney, Sandra Linklater, Arthur McComb and Bob Gravel.

In 1900, Annie Hardisty and her two daughters were the first settlers on the site.[3] But the place really developed when on June 6, 1903, four canoes and a crew of 21 persons of the Révillon Frères company arrived on the banks of the Moose River near the much older Moose Factory to establish the Moose River Post. This Parisian furrier had ambitious plans to set up a chain of fur trading posts in direct competition with the Hudson's Bay Company, including five on James Bay. But it suffered a setback when their supply ship that carried all the provisions shipwrecked near Fort George.[4]

Consequently, Moose River Post became the most important location for Révillon Frères and was quickly expanded with a staff house, carpenter's shop, warehouse, and sawmill. The buildings were spaced far apart as a preventative measure to minimize the spread of fire. By 1912, it was reported that "the whole line of good substantial buildings, built principally for their French Canadian employees, stretches along the river front for nearly a mile northward from the residence of the inspector."[4]

Moose River Post (and Moose Factory) were prosperous but isolated. It was supplied only once per year by ship coming from Montreal around the Labrador Peninsula. Mail arrived only four times per year, twice by canoe and twice by toboggan. During World War I, Révillon Frères' chartered supply ship was requisitioned for war service. So from then on until 1932, the post was supplied by scows from Pagwa on the National Transcontinental Railway coming down the Pagwachuan, Kenogami, and Albany Rivers.[4]

In 1932, the Temiskaming and Northern Ontario Railway was extended from Cochrane to Moose River Post, that was renamed at that time to Moosonee, derived from the Cree word Moosoneek meaning "at the Moose (River)". In 1936, Révillon Frères sold its Canadian operations to the Hudson's Bay Company and the Moosonee post closed.[2][4] The HBC also exited the fur trade and opened a retail store in Moosonee (now Northern Store part of The North West Company). With the end of the fur trade business, Moosonee's economy became centered on transportation.[5]

In 1962, Moosonee became the site of RCAF Station Moosonee that was part of NORAD's Pinetree Line chain of radar stations. It closed in 1975 and some of its buildings were used by the Town after the closure, including the base swimming pool and recreation centre.[6]

In 1968, the town was classified as a Development Area Board. In November 2000, it was incorporated as the Town of Moosonee.[2]

The population is 2,006 according to the Statistics Canada 2006 Census[1] and about 3,500 people by municipal government estimate.[5] Census figures for Moosonee may be inaccurate because of incomplete enumeration, a common problem with remote communities.[citation needed] About 85 per cent of the population are native Cree.[5] The number of total private dwellings is 658 of which 596 are occupied by usual residents. Population density per square kilometre is 3.6.[1] 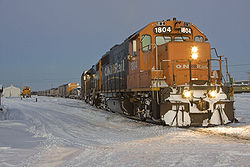 The main method of access is by Ontario Northland Railway which reached the town in 1932 and which provides passenger and freight train service to Cochrane.[5] Ontario Northland's Polar Bear Express train runs to Cochrane six days per week during the summer months and five days per week during the rest of the year. There are also two freight trains per week. During the summer and early fall shipping season, goods can be transported from Moosonee by barge. In January 2007, responsibility for the Port of Moosonee was transferred from the federal government to the Town of Moosonee.

The town is also accessible via the Moosonee Airport, served with scheduled flights of Air Creebec, and Moosonee Water Aerodrome.

Moosonee is inaccessible by road. The nearest road outside of Moosonee ends at Otter Rapids which is 148.9 kilometres (92.5 mi) south of Moosonee. During the early months of 2008, a winter road was open between Moosonee and the provincial road system at Otter Rapids. This road was built to support the twinning of the electric transmission lines that run from Otter Rapids to Moosonee. Local residents report it taking five or six hours to get to Timmins from Moosonee via Otter Rapids and Smooth Rock Falls. This road was not in service in 2009. In late 2009, members of the Moose Cree First Nation voted for the construction of a seasonal winter road south to Otter Rapids.

During the winter, ice roads are plowed and maintained on the ice across the Moose River to Moose Factory and winter roads are maintained to the coastal communities of Fort Albany, Kashechewan and Attawapiskat. In recent years, much of the traffic heading up north has been destined for the Victor Diamond Mine operated by De Beers Canada to the west of Attawapiskat.

Moosonee has a local radio station, CHMO 1450 AM that is generally operated by volunteers, plus a rebroadcasting facility for CBC Radio One Northern Ontario from CBCS-FM Sudbury on 1340 AM. CBLT (on channel 9) and TVOntario (channel 11) have low-powered rebroadcast transmitters in Moosonee. Most homes subscribe to either Creecable cable TV or a satellite TV service to augment the two locally available channels.

Notable attractions in Moosonee include:

The Tidewater Provincial Park is on the nearby Prince Charles Island, adjacent to Moose Factory Island.