Mail's first incarnation was as NeXTMail, the mail application for the NeXTSTEP operating system. NeXTMail was innovative for its time, supporting rich text formatting with images, and voice messaging. It also supported MIME emails, along with plain text, to allow for backward compatibility. The default message found in the inbox when the user first opened NeXTMail included a voice recording of Steve Jobs.

When Apple began to adapt NeXTSTEP to become Mac OS X, both the operating system and the application went through various stages as it was developed. In a beta version of OS X, known as the code-name "Rhapsody", and various other early pre-releases of Mac OS X, Mail was known as MailViewer. However, with the third developer release of Mac OS X, the application had returned to being simply known as Mail.

Included in all versions of Mac OS X up to and including Mac OS X v10.3, Mail was integrated with other Apple applications such as Address Book, iChat, and iCal. Some of its features that remain in the most recent version of Mail include rules for mailboxes, junk mail filtering and multiple account management.

Some of the new features in Version 2 also included:

The new version also changed the UI for the buttons in the toolbar. Where previous buttons had free-standing defined shapes, the new buttons had shapes within a lozenge-shaped capsule.[1] According to many users, and even Apple's own human interface guidelines at the time, this was worse for usability.[2] An open-source third-party application reverted Mail to use the old icons.[3] Nevertheless, Apple updated their guidelines to include capsule buttons, and the new UI has persisted.[4] 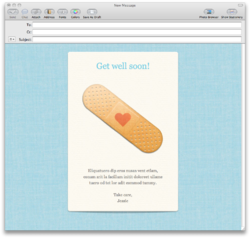 A Mail compose window, displaying the "Get well" stationery template.

Introduced with Mac OS X v10.5 Leopard,[5] Version 3 included personalized stationery which is handled in standard HTML format. Mail 3 also offered Notes and To-dos which can be synced with iCal as well as a built-in RSS reader. Mail 3 also introduced IMAP IDLE support (only for inbox, not for folders).

Introduced with Mac OS X v10.7 Lion. Mail 5 features a redesigned iPad-like fullscreen UI, a more powerful search engine, and support for Microsoft Exchange Server 2010 and IMAP Yahoo Mail. It also groups messages from the same conversation and displays them in a streamlined feed, like in Mail on iOS 4.[8] The bounce function, where unwanted emails can be bounced back to the sender, was dropped for no apparent reason.

Mail has a unique feature in which messages are automatically sent in plain text format unless action is taken to format the e-mail with rich text editing options. This aspect of Mail can be misleading because the selected default font for new messages is not what will show up on the recipient's side unless there is a manually-formatted RTF aspect to the e-mail.

Problems with IMAP accounts when upgrading from Apple Mail 4

Many users upgrading from previous versions of Apple Mail report problems with the latest IMAP client implementation under certain circumstances.[9] The problem seems to occur when in the Mail preferences the authentication is set to PASSWORD and the server is signalizing it supports SASL PLAIN