Mordant
This article is about the substance used to set dyes. For the musical ornament, see mordent.
For other uses, see Mordant (disambiguation). 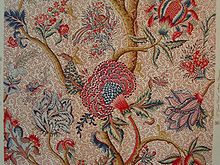 A French Indienne, a printed or painted textile in the manner of Indian productions, which used mordants to fix the dyes.

A mordant is a substance used to set dyes on fabrics or tissue sections by forming a coordination complex with the dye which then attaches to the fabric or tissue.[1] It may be used for dyeing fabrics, or for intensifying stains in cell or tissue preparations. The term mordant comes from the Latin word, "mordere", to bite. In the past, it was thought that a mordant helped the dye bite onto the fiber so that it would hold fast during washing. A mordant is often a polyvalent metal ion.[2] The resulting coordination complex of dye and ion is colloidal and can be either acidic or alkaline.

Iodine is often referred to as a mordant in Gram stains but is in fact a trapping agent.[3]

The three methods used for mordanting are:

The type of mordant used changes the shade obtained after dyeing and also affects the fastness property of the dye. The application of mordant, either pre-, meta- or post-mordant methods, is influenced by:

Dye results can also rely on the mordant chosen as the introduction of the mordant into the dye will have a marked effect on the final color. Each dye can have different reactions to each mordant. For example, cochineal scarlet, or Dutch scarlet as it came to be known, used cochineal along with a tin mordant to create a brilliant orange-hued red.[4]

The dye lake is an insoluble molecule formed when the complex of dye and mordant are combined, which then attaches to the substrate. Mordants increase the fastness of the dye since the larger molecule is now bonded to the fiber.[2]

The term "lake" is derived from the term lac, the secretions of the Indian wood insect Laccifer lacca (formerly known as the Coccus lacca). This is the same insect from which shellac is obtained.[5] The type of mordant used can change the colour of both the dye-plus-mordant solution and influence the shade of the final product.

Unlike cotton, wool is highly receptive toward mordants. Due to its amphoteric nature wool can absorb acids and bases equally effectively. When wool is treated with a metallic salt it hydrolyses the salt into an acidic and basic component. The basic component is absorbed at –COOH group and the acidic component is removed during washing. Wool also has a tendency to absorb fine precipitates from solutions; these cling to the surface of fibres and dye particles attached to these contaminants result in poor rubbing fastness.

Like wool, silk is also amphoteric and can absorb both acids as well as bases. However, wool has thio groups (-SH) from the cystine amino acid, which act as reducing agent and can reduce hexavalent chromium of potassium dichromate to trivalent form. The trivalent chromium forms the complex with the fibre and dye. Therefore potassium dichromate cannot be used as mordant effectively.

In Histology, mordants are indispensable in adhering dyes to tissues for microscopic examination.

Methods for mordant application depend on the desired stain and tissues under study; pre-, meta- and post-mordanting techniques are used as required.

The most commonly used stain used in diagnostic histology of animal tissues is Harris' haematoxylin as part of a haematoxylin and eosin (H&E) stain.