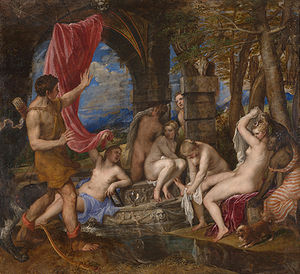 Diana and Actaeon by Titian has a full provenance covering its passage through several owners and four countries since it was painted for Philip II of Spain in the 1550s.

Provenance, from the French provenir, "to come from", refers to the chronology of the ownership or location of an historical object.[1] The term was originally mostly used for works of art, but is now used in similar senses in a wide range of fields, including science and computing. Typical uses may cover any artifact found in archaeology, any object in paleontology, certain documents (such as manuscripts), or copies of printed books. In most fields, the primary purpose of provenance is to confirm or gather evidence as to the time, place, and—when appropriate—the person responsible for the creation, production, or discovery of the object. This will typically be accomplished by tracing the whole history of the object up to the present. Comparative techniques, expert opinions, and the results of scientific tests may also be used to these ends, but establishing provenance is essentially a matter of documentation.

Provenance issues regarding works of art and cultural artifacts is a largely taboo subject within the museum discipline.

Works of art and antiques

The provenance of works of fine art, antiques and antiquities is of great importance because of the cultural value of such objects. Documented evidence of provenance for an object can help to establish that it has not been altered and is not a forgery, a reproduction, stolen or looted art. Provenance helps assign the work to a known artist, and a documented history can be of use in helping to prove ownership. An example is the case of the Arnolfini portrait.

The quality of provenance of an important work of art can make a considerable difference to its selling price in the market; this is affected by the degree of certainty of the provenance, the status of past owners as collectors, and in many cases by the strength of evidence that an object has not been illegally excavated or exported from another country. The provenance of a work of art may be recorded in variously depending on context or the amount that is known, from a single name to an entry in a scholarly catalogue thousand words long.

An expert certification can mean the difference between an object having no value and being worth a fortune.

In transactions of old wine with the potential of improving with age, the issue of provenance has a large bearing on the assessment of the contents of a bottle, both in terms of quality and the risk of wine fraud. A documented history of wine cellar conditions is valuable in estimating the quality of an older vintage due to the fragile nature of wine.[3]

Provenance is a fundamental principle of archives, referring to the individual, group, or organization that created or received the items in a collection. According to archival theory and the principle of provenance, records of different provenance should be separated.

In archival practice, proof of provenance is provided by the operation of control systems that document the history of records kept in archives, including details of amendments made to them. It was developed in the nineteenth century by both French and Prussian archivists.

Provenance is the title of the journal published by the Society of Georgia Archivists.

Provenance studies may shed light on the books themselves, providing evidence of the role particular titles have played in social, intellectual and literary history. Such studies may also add to our knowledge of particular owners of books. For instance, looking at the books owned by a writer may help to show which works influenced him or her.

Many provenance studies are historically focused, and concentrated on books owned by writers, politicians and public figures. The recent ownership of books is studied, however, as is evidence of how ordinary or anonymous readers have interacted with books.[6][7]

Provenance can be studied both by examining the books themselves (for instance looking at inscriptions, marginalia, bookplates, book rhymes, and bindings) and by reference to external sources of information such as auction catalogues.[4]

Evidence of provenance can be of importance in archaeology and palaeontology. Fakes are not unknown and finds are sometimes removed from the context in which they were found without documentation, reducing their value to the world of learning. Even when apparently discovered in-situ archaeological finds are treated with caution. The provenance of a find may not be properly represented by the context in which it was found. Artifacts can be moved far from their place of origin by mechanisms that include looting, collecting, theft or trade and further research is often required to establish the true provenance of a find. 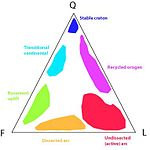 Fossils can also move from their primary context and are sometimes found, apparently in-situ, in deposits to which they do not belong, moved by, for example, the erosion of nearby but different outcrops. Most museums make strenuous efforts to record how the works in their collections were acquired and these records are often of use in helping to establish provenance.

In the geologic use of the term, provenance instead refers to the lithologic origin of a rock, most commonly in sedimentary rocks. It does not typically refer to the circumstances of the collection of the rock.

Seed provenance refers to the specified area in which plants that produced seed are located or were derived. Local provenancing is a position maintained by ecologists that suggests that seeds should be planted of local provenance only. However, this view suffers from the adaptationist program - a view that populations are universally locally adapted.[8] It is maintained that local seed is best adapted to local conditions (local adaptation) and outbreeding depression will be avoided. Evolutionary biologists suggest that strict adherence to provenance collecting is not a wise decision because: 1. Local adaptation is not as common as assumed [9] 2. Background population maladaptation can be driven by natural processes [9] 3. Human actions of habitat fragmentation drive maladaptation up and adaptive potential down [10] 4. natural selection is changing rapidly due to climate change [11] and habitat fragmentation 5. population fragments are unlikely to divergence by natural selection since fragmentation (<500 years). This leads to a low risk of outbreeding depression [12]

Scientific research is generally held to be of good provenance when it is documented in detail sufficient to allow reproducibility[13]. Scientific workflows assist scientists and programmers with tracking their data through all transformations, analyses, and interpretations. Data sets are reliable when the process used to create them are reproducible and analyzable for defects[14]. Current initiatives to effectively manage, share, and reuse ecological data are indicative of the increasing importance of data provenance. Examples of these initiatives are National Science Foundation Datanet projects, DataONE and Data Conservancy.

The term provenance is used when ascertaining the source of goods such as computer hardware to assess if they are genuine or counterfeit. Chain of custody is an equivalent term used in law, especially for evidence in criminal or commercial cases. Data provenance covers the provenance of computerized data. There are two main aspects of data provenance: ownership of the data and data usage. Ownership will tells the user who is responsible for the source of the data, ideally including information on the originator of the data. Data usage gives details regarding how the data as been used and modified and often includes information on how to cite the data source or sources. Data provenance is of particular concern with electronic data, as data sets are often modified and copied without proper citation or acknowledgement of the originating data set. Databases make it easy to select specific information from data sets and merge this data with other data sources without any documentation of how the data was obtained or how it was modified from the original data set or sets.

Secure Provenance refers to providing integrity and confidentiality guarantees to provenance information. In other words, secure provenance means to ensure that history cannot be rewritten, and users can specify who else can look into their actions on the object.[15]