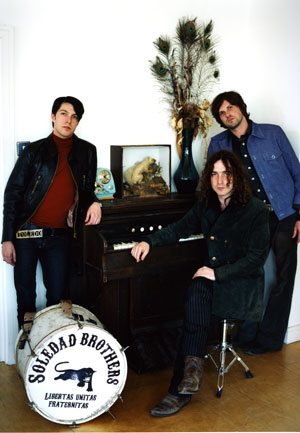 The Soledad Brothers were a trio from , consisting of on drums, on guitar and vocals, and (formerly of and who was recruited just before the release of their second album) on sax and guitar. The band produced four albums: "Soledad Brothers" (2000), "Steal Your Soul and Dare Your Spirit to Move" (2002), "Voice of Treason" (2003), and "The Hardest Walk" (2006).

Taking their name from a trio of convicted felons who were members of the —George Jackson, , and —incarcerated at Soledad Prison and killed by police fire, the Soledad Brothers formed in 1998 in their hometown of (near Toledo).

The band's foundations began with Johnny Walker (Johnny Wirick) joining the punk blues band Henry and June, in which Benjamin "Swank" Smith was already performing as drummer. Henry and June existed from 1994 until 1996. Wirick continued playing with drummer Doug Walker in the two-piece blues outfit 'Johnny Walker'. The Soledad Brothers began in early 1998 after guitarist/vocalist Johnny Wirick (a.k.a. Johnny Walker) asked drummer Ben Smith (a.k.a. Ben Swank) if he wanted to play a show. When traveling north to Detroit for a few gigs, the duo was approached by Italy Records owner Dave Buick. The label recorded the band, releasing the single "Sugar and Spice", which attracted Estrus Records. This led to the release of "The Gospel According to John" single along with a number of others, the success of which prompted Estrus Records to put out the band's first full-length album.

The self-titled album was engineered by Jack White of , who also produced their second single. performs some percussion on this album. While both the Soledad Brothers and the White Stripes were Detroit bands heavily influenced by blues, the relationship between the two was also personal. Ben was Jack's roommate for some period of time, and Johnny played slide guitar on two songs from The White Stripes' debut album, as well as teaching Jack how to play slide.

The band followed up with the 2002 album, "Steal Your Soul and Dare Your Spirit to Move". The blues influence is still very prevalent, but also saw the introduction of the heavier '60s and '70s Brit-rock influence.

The Soledads' third release came in 2003, "Voice of Treason", on Loog Records in the UK. It saw the band expand their sound with some jazz influence, and some strange atmospheric sounds. The bulk of the album still retained their distinctive blues-rock style. Though uncredited it would seem that Mr David Viner played on the album.

Their fourth album "The Hardest Walk", released in 2006 on in the US and Loog in the UK, transcends the rampant garage blues that had so characterized the band's previous work by taking in a diverse range of influences, from and to and early , with some melodies and grooves added.

It was announced within weeks of the album's release, however, that the band was breaking up. Upcoming shows were cancelled and the band's final gigs were at the Magic Stick in and the Southgate House in .

Walker is now playing in a band called Cut In The Hill Gang, based out of Covington, Kentucky. The band recently released their debut, a vinyl single on Little Room Record Co [http://www.littleroomrecordco.com/main.html] .This marks the first release of Little Room Record Co. The tracks on the single are "Quixotic Dream" and a cover, "." The single became available Feb.12, 2008. There were 500 7"s pressed on black vinyl. A full length LP is in the works, slated for autumn of 2008.

*They appear in "Detroit Rock Movie".
*They appear in the documentary "It Came From Detroit", directed by James R. Petix
*A cover of the song "Goin' Back to Memphis" can be found on The White Stripes 2004 released live DVD "".