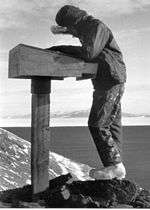 A mariner from the freighter USNS Southern Cross signs the summit registry on Observation Hill.

Observation Hill is a large hill (750 ft/230m) adjacent to McMurdo Station in Antarctica and commonly called "Ob Hill." It is frequently climbed to get good viewing points across the continent. Regular clear skies give excellent visibility.

Robert Falcon Scott's party was found by a search party led by the surgeon Dr. Edward L. Atkinson. They were found dead by the members of the base camp, who took their photographic film, scientific specimens, and other materials. They had to leave Scott and his men in their tent, and later parties could not locate the campsite, since that area had been covered in snow. Scott's party eventually ended up drifting out to sea on an iceberg.

The search party returned to what is now known as McMurdo and climbed Observation Hill. There they erected a large wooden cross, inscribed the names of the fatal party and a short quote from the Alfred Tennyson poem "Ulysses", which reads "To strive, to seek, to find, and not to yield."