The Commonwealth Scientific and Industrial Research Organisation (CSIRO) is the national government body for scientific research in Australia. It was founded in 1926 originally as the Advisory Council of Science and Industry.

Research highlights include the invention of atomic absorption spectroscopy, development of the first polymer banknote, the invention of Wi-Fi technology,[1] the invention of the insect repellent in Aerogard and the introduction of a series of biological controls into Australia, such as the introduction of Myxomatosis and Rabbit calicivirus which causes rabbit haemorrhagic disease for the control of rabbit populations. CSIRO's research into ICT technologies has resulted in advances such as the Panoptic Search Engine[2] (now known as Funnelback) and Annodex.[3]

In October 2005 the journal Nature announced that CSIRO scientists had developed near-perfect rubber from resilin, the elastic protein which gives fleas their jumping ability and helps insects fly.[4] On 19 August 2005, CSIRO and UTD (University of Texas at Dallas) announced they were able to make transparent carbon nanotube sheets that will bring carbon nanotube products to the masses. 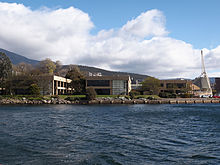 Employing over 6,600 staff, CSIRO maintains more than 50 sites across Australia and biological control research stations in France and Mexico. The primary roles of CSIRO include contributing to meeting the objectives and responsibilities of the Australian Federal Government and providing new ways to benefit the Australian community and the economic and social performance of a number of industry sectors through research and development.

Research undertaken by CSIRO is divided into operational 'Divisions'. As at September 2010, these divisions are[5]:

In addition, CSIRO is a participant in a number of joint ventures, including:

The CSIRO "Flagship" initiative was designed to integrate, focus and direct national scientific resources. In May 2005, the government announced the launch of CSIRO's $97 million Flagship Collaboration Fund, which is intended to encourage cooperative research between universities, CSIRO and other research agencies.

In April 2007, funding for a new Flagship was announced by the Federal government.[8] It will be investigating the effects of Climate Change.

CSIRO's Air Quality Modelling and Dispersion Team[9] is a part of the Marine and Atmospheric Research division.

Some of the widely used air quality dispersion models[10] developed by CSIRO are:

A precursor to CSIRO, the Advisory Council of Science and Industry, was established in 1916 at the initiative of Prime Minister Billy Hughes. However, the Advisory Council struggled with insufficient funding during the First World War. In 1920 the Council was renamed the "Commonwealth Institute of Science and Industry", and was led by George Handley Knibbs (1921–26), but continued to struggle financially.

In 1926 The Science and Industry Research Act replaced the Institute with the 'Council for Scientific and Industrial Research' (CSIR). The CSIR was structured to represent the federal structure of Australian government, and had state-level committees and a central council. As well as this improved structure, the CSIR benefited from strong bureaucratic management under George Julius, David Rivett, and Arnold Richardson. CSIR research focussed on primary and secondary industries. Early in its existence, it established divisions studying animal health and animal nutrition. After the depression, the CSIR extended into secondary industries such as manufacturing.

CSIRO today has expanded into a wider range of scientific inquiry. This expansion began with the establishment of CSIRO in 1949 which, as well as a name change, reconstituted the organisation and its administrative structure. Under Ian Clunies Ross as chairman, CSIRO pursued new areas such as radioastronomy and industrial chemistry.

Notable inventions and breakthroughs by CSIRO include:

CSIRO owned the first computer in Australia, CSIRAC, built as part of a project began in the Sydney Radiophysics Laboratory in 1947. The CSIR Mk 1 ran its first program in 1949, the fifth electronic computer in the world. It was over 1000 times faster than the mechanical calculators available at the time. It was decommissioned in 1955 and recommissioned in Melbourne as CSIRAC in 1956 as a general purpose computing machine used by over 700 projects until 1964.[16] The CSIRAC is the only surviving first-generation computer in the world.[17]

Between 1965 and 1985, Dr. George Bornemissza of CSIRO's Division of Entomology founded and led the Australian Dung Beetle Project. Dr. Bornemissza, upon settling in Australia from Hungary in 1951, noticed that the pastureland was covered in dry cattle dung pads which did not seem to be recycled into the soil and caused areas of rank pasture that was unpalatable to the cattle. He proposed that the reason for this was that native Australian dung beetles, which had co-evolved alongside the marsupials (which produce dung very different in its composition from cattle), were not adapted to utilise cattle dung for their nutrition and breeding, since cattle had only relatively recently been introduced to the continent in the 1880s. The Australian Dung Beetle Project therefore, sought to introduce species of dung beetle from South Africa and Europe (which had co-evolved alongside bovids) in order to improve the fertility and quality of cattle pastures. 23 species were successfully introduced throughout the duration of the project and also had the effect of reducing the pestilent bush fly population by 90%.[18].

CSIRO was the first Australian organisation to start using the internet,[19] and as such was free to register the second-level domain csiro.au (as opposed to csiro.org.au or csiro.com.au). Guidelines were introduced in 1996 to regulate the use of the .au domain.

In 2005 the organisation also gained worldwide attention (and criticism) for publishing and promoting the Total Wellbeing Diet book[21] which features a high-protein, low-carbohydrate diet. The book has sold over half a million copies in Australia and over 100,000 overseas[22] but was criticised in an editorial by Nature for giving scientific credence to a "fashionable" diet book sponsored by meat and dairy industries.[23]

CSIRO has consistently maintained that it owns the rights to a key part of modern IEEE 802.11 protocols with U.S. Patent 5,487,069. It declined to sign a Letter of Assurance that no lawsuits would be filed over its use in the 802.11n currently gaining acceptance.[24] In late November 2007, CSIRO won a lawsuit against Buffalo Technology, with an injunction that Buffalo must stop supplying AirStation products that infringe on the 802.11 patent.

On 19 September 2008, the Federal Circuit ruled in Buffalo’s favour and remanded the case to the district court ruling that the district court’s Summary Judgement was insufficient on the merits of obviousness of CSIRO’s patent. Therefore, this case was to be tried again before the district court. In this connection Buffalo was hopeful that it would shortly be permitted to, once again, sell IEEE 802.11a and 802.11g compliant products in the United States.[24][25] On 13 July 2009 Buffalo announced the settlement of the patent infringement action.[26]

As of 23 April 2009, the CSIRO has obtained settlements from most of the other organisations involved, including Dell, Intel, Microsoft, Asus, Fujitsu, Hewlett Packard, Nintendo, Toshiba, Netgear, D-Link, Belkin, SMC, Accton and 3Com.[27]