These ships were optimized for the anti-air warfare role. For this role the ships are equipped with an advanced sensor and weapons suite. The primary sensors for this role are the long range surveillance radar SMART-L and the multi-function radar APAR. The SMART-L and APAR are highly complementary, in the sense that SMART-L is a D band radar providing very long range surveillance while APAR is an I band radar providing precise target tracking, a highly capable horizon search capability, and missile guidance using the Interrupted Continuous Wave Illumination (ICWI) technique, thus allowing guidance of 32 semi-active radar homing missiles in flight simultaneously, including 16 in the terminal guidance phase.[1] The primary anti-air weapons are the point defence Evolved Sea Sparrow Missile and the area defence SM-2 Block IIIA. The Mk 41 Vertical Launch System is used to house and launch these missiles. 32 Evolved Sea Sparrow Missile and 32 SM-2 Block IIIA are carried.

The Koninklijke Marine is investigating the use of these ships for the role of Ballistic Missile Defence (BMD). During tests carried out by HNLMS Tromp in the Pacific ocean near Hawaii, experimental modifications to the SMART-L to allow even longer range were proven (see details here). A study by the Koninklijke Marine, the Netherlands Defence Material Organization, Thales Nederland, Raytheon Missile Systems, Johns Hopkins University Applied Physics Laboratory, and Lockheed Martin has been conducted to establish the feasibility of modifying the De Zeven Provinciën class to provide it the capability to intercept ballistic missiles. In particular, the study examined the feasibility of integrating the SM-3 Block IB missile with the SMART-L and APAR radars. The study concluded that - with certain modifications to the SMART-L and APAR, as well as to the ship's Combat Management System and the missile itself - BMD with the De Zeven Provinciën class could be achieved.[2]

The Zeven Provincien class are very modern. The Zeven Provincien class ships will get the new Smart-L mk2 radar that can detect ballistic missiles at a range of 2000 km. The Dutch minister promised also that the APAR radar will have a bigger range than 400 km. This is because the Netherlands is the first country that is participating as an active missile shield for NATO.[citation needed]

As noted above, these ships were optimized for anti-air warfare, but they also have weapons on-board capable of attacking surface and submarine targets, for example: the RGM-84F Harpoon missile and Mk. 46 torpedoes.

Plans to equip some of the Zeven Provinciën-class frigates with a total of 32 BGM-109 Tomahawk cruise missiles have existed but these were shelved in May 2005.[3]

In November 2003, some 200 nautical miles (370 km) from the Azores, the missile guidance capabilities were tested with live firings for the first time.[1] The firings involved the firing of a single ESSM and a single SM-2 Block IIIA. These firings were the first ever live firings involving a full-size ship-borne Active Electronically Scanned Array (i.e., APAR) guiding missiles using the ICWI technique in an operational environment.[4] As related by Jane's Navy International:

During the tracking and missile-firing tests, target profiles were provided by Greek-built EADS/3Sigma Iris PVK medium-range subsonic target drones. [...] According to the RNLN, ... "APAR immediately acquired the missile and maintained track until destruction". [...] These ground-breaking tests represented the world's first live verification of the ICWI technique.[1]

Further live firings were performed in March 2005, again in the Atlantic Ocean some 180 nautical miles (330 km) west of the Azores.[1] The tests involved three live-firing events including firing a single SM-2 Block IIIA at an Iris target drone at long range, a single ESSM at an Iris target drone, and a two-salvo launch (with one salvo comprising two SM-2 Block IIIAs and the other comprising two ESSMs) against two incoming Iris target drones.[1] The long-range SM-2 engagement apparently resulted in an intercept at a range of greater than 100 km from the ship, with a missile-target miss distance of 8 feet (the warhead's proximity fuse having been disabled for the purposes of the test).[1]

Ships of the De Zeven Provinciën class have been involved in counter-piracy operations off the Horn of Africa. The untraditional target set (i.e., small slow-moving or even static surface targets) can apparently be challenging for doppler radars designed to take on "high end" threats. However, according to Jane's International Defence Review:

[The RNLN has] reported great success using tailored surface-search software for the APAR sets fitted to the De Zeven Provinciën class frigates deployed on anti-piracy roles. By sacrificing some of APAR's high-end anti-air warfare capabilities, which were deemed unnecessary for the anti-piracy role, its performance and resolution were improved in the surface-search role.[5]

All ships were built at Royal Schelde's shipyard in Vlissingen, Netherlands. 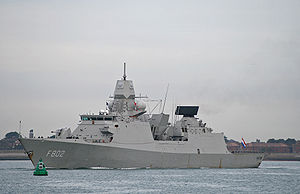