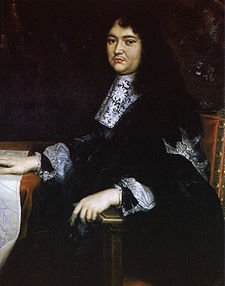 François Michel Le Tellier, Marquis de Louvois (18 January 1641 – 16 July 1691) was the French Secretary of State for War for a significant part of the reign of Louis XIV. Louvois and his father, Michel le Tellier, would increase the French Army to 400,000 soldiers, an army that would fight four wars between 1667 and 1713. He is commonly referred to as "Louvois".

Louvois was born in Paris to Michel Le Tellier and Elisabeth Turpin. Louvois, through an arranged marriage, wed an heiress, Anne de Souvré, Marquise de Courtenvaux. Louvois received instructions from his father in the management of state affairs. The young man won the king's confidence, and in 1666 he succeeded his father as war minister.

His talents were perceived by Turenne in the War of Devolution (1667–68), who gave him instruction in the art of providing armies. After the peace of Aix-la-Chapelle, Louvois devoted himself to organising the French army. The years between 1668 and 1672, says Camille Rousset, "were years of preparation, when Lionne was labouring with all his might to find allies, Colbert to find money, and Louvois soldiers for Louis."

The earliest known record regarding the mysterious Man in the Iron Mask is a letter written by Louvois, dated 1 July 1669. 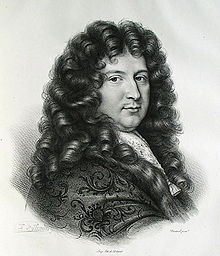 The work of Louvois in these years is bound up with the historical development of the French army and of armies in general. Here need only be mentioned Louvois's reorganization of the military orders of merit, his foundation of the Hotel des Invalides, and the almost forcible enrollment of the nobility and gentry of France, in which Louvois carried out part of Louis's measures for curbing the spirit of independence by service in the army or at court.

The success of his measures is to be seen in the victories of the Franco-Dutch War of 1672–78. After the Peace of Nijmegen Louvois was high in favour, his father had been made chancellor, and the influence of Colbert was waning. The ten years of peace between 1678 and 1688 were distinguished in French history by the rise of Madame de Maintenon, the capture of Strasbourg and the revocation of the Edict of Nantes, in all of which Louvois bore a prominent part. The surprise of Strasbourg in 1681 in time of peace was not only planned but executed by Louvois and Monclar. A saving clause in the revocation of the Edict of Nantes, which provided for some liberty of conscience, if not of worship, Louvois sharply annulled with the phrase "Sa majesté veut qu'on fasse sentir les dernières rigueurs a ceux qui ne voudront pas se faire de sa religion" ("His Majesty wishes the worst harshness on those who do not partake of his religion.")

He claimed also the credit of inventing the dragonnades, and mitigated the rigour of the soldiery only insofar as the licence accorded was prejudicial to discipline. Discipline, indeed, and complete subjection to the royal authority was the political faith of Louvois. Colbert died in 1683, and had been replaced by Le Pelletier, an adherent of Louvois, in the controller-generalship of finances, and by Louvois himself in his ministry for public buildings, which he took that he might be the minister able to gratify the king's two favourite pastimes, war and building. Louvois was able to superintend the successes of the first years of the war of the League of Augsburg and in 1688 initiated the collection of Plans-Reliefs of French strongholds that is now the Musée des Plans-Reliefs. However, he died suddenly of apoplexy after leaving the king's cabinet on 16 July 1691, though this account is challenged by Voltaire, who wrote in "Le Siecle de Louis XIV" that Louvois died while taking waters in Balarue. His sudden death caused a suspicion of poison.

Louvois was one of the greatest of the rare class of great war ministers. French history can only point to Carnot as his equal. Both had to organize armies out of old material on a new system, both were admirable contrivers of campaigns, and both devoted themselves to the material well-being of the soldiers. In private life and in the means employed for gaining his ends, Louvois was unscrupulous and shameless.

He had six children with his wife: