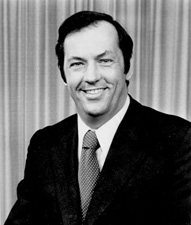 William Warren "Bill" Bradley (born July 28, 1943) is an American hall of fame player, Rhodes scholar, and former U.S. Senator from and presidential candidate, who opposed Vice President for the Democratic Party's nomination for President in the 2000 election.

Bradley is an Eagle Scout and recipient of the from the .

Bradley is a close friend of NBA Coach , since they were traveling roommates playing for the together. In 2000, Jackson was a vocal supporter of Bradley's run for the presidency and often wore his campaign button in public. In the 2007 induction ceremony, Bradley accompanied Jackson who was one of the inductees that year.

Bradley was born in to Warren Bradley, a banker, and Susie Crowe. [ [http://www.wargs.com/political/bradley.html Ancestry of Bill Bradley ] ] Bradley began playing basketball in . He was a basketball star at Crystal City High School, where he scored 3,068 points in his scholastic career and was twice named All-American. With stellar academic credentials as well, he received 75 college offers.

The 6' 5" (1.96 m) Bradley chose , even though colleges could not offer athletic scholarships, after backing out of a commitment to . At Princeton, under coach , Bradley was a three-time All-American and the 1965 National Player of the Year. In each of Bradley's varsity seasons, the Tigers captured the Ivy League championship. During his sophomore season, Bradley averaged 27.3 points and 12.2 rebounds a game while sinking 89.3 percent of his free throws. Among his greatest games was a 41-point effort in an 80-78 loss to heavily favored Michigan in the 1964 Holiday Festival (Bradley fouled out with his team leading 75-63), and a 58-point outburst against Wichita State in the 1965 NCAA tournament, which was a single-game tournament record. In total, Bradley scored 2,503 points at Princeton, averaging 30.2 points per game. In 1965, Bradley became the first basketball player chosen as winner of the , presented to the United States' top amateur athlete in the country.

As a freshman, Bradley sank 57 successive free throws, a record unmatched at that time by any other player, college or professional. As a sophomore, he led the league in rebounds, field goals, free throws, and total points, and, when he fouled out after scoring a record-breaking 40 points in an NCAA tournament game with Saint Joseph's in Philadelphia, was given an unprecedented ovation.

In his junior year, he scored 51 points against Harvard, more than the entire opposing team had scored before he was taken out, and his 33.1 points-per-game average that season set an Ivy League record.

In his senior year, as captain, he led Princeton to its highest national basketball ranking ever. The Tigers placed third behind UCLA and Michigan in the NCAA tournament, by virtue of an 118-82 victory over Wichita State in the semi-final consolation game. In that game, Bradley scored 58 points. Only one other player has scored more in a tournament game: Notre Dame's scored 61 points in 1970 in a first round victory over Ohio.

Bradley graduated with honors and was awarded a at , . Bradley also served as captain of the -winning U.S. Olympic basketball team in 1964. Bradley's remarkable tenure at Princeton was the subject of -winning author 's first book, "A Sense of Where You Are".

After completing his studies at Oxford, and playing professional basketball briefly in for (1965-66 season), where he won a European Champions Cup (the most important trophy for European teams), Bradley returned to the U.S. to join the of the . On the court, Bradley struggled in his rookie year before coming into his own in his second season, when he was moved from the guard position to his more natural forward slot. In 1969–70, he helped the Knicks win their first NBA championship, followed by a second in 1972–73. The second championship season was Bradley's best as a pro, and he made his only All-Star Game appearance that year. His first NBA title also made him the first player ever to win an Olympic gold medal, a European Champions Cup, and an NBA championship ring. This feat has only been matched by (in Ginóbili's case, the relevant European title is the current ). Retiring from basketball in 1977, he was elected to the in his first year of eligibility. In 1984 the Knicks retired his number 24 jersey.

In the NBA, Bradley was not the major scoring threat he had been in college. Over ten years at for the Knicks, "Dollar Bill," as he was nicknamed, scored a total of 9,217 points for an average of 12.4 points per game, with his best season being 16.1 points per game.

During his NBA career, Bradley used his fame on the court to explore social as well as political issues, meeting with journalists, government officials, academics, businesspeople, and social activists. He also worked as an assistant to the director of the Office of Economic Opportunity in Washington, D.C., where he made contacts in Democratic circles. In 1976, Bradley also became an author, with "Life on the Run", which chronicled his experiences in the NBA and the people he met along the way.

Bradley had harbored political ambitions for years, and in 1978 decided to run for in , for a seat held by liberal Republican and four-term incumbent . Case lost the to anti-tax Jeffrey Bell, and Bradley won the seat in the with 55 percent of the vote.

In the Senate, Bradley acquired a reputation for being somewhat aloof and was thought of as a "," specializing in complex reform initiatives. The best known of these was the 1986 overhaul of the federal , which reduced the tax rate schedule to just two brackets, 15 percent and 28 percent, and eliminated many kinds of deductions. Although he was a vocal supporter of various causes and political reform, he sometimes broke ranks with his party to support the Reagan administration (initially supporting, for instance, Reagan's policy of aiding the Contras in ).

Some significant initiatives that Bradley led or was associated with included: reform of enforcement; legislation concerning lead-related children's health problems; the ; ; a re-apportioning of California water rights; and federal reform to reduce the , which included, in 1981, supporting Reagan's spending cuts but opposing his parallel package, one of only three senators to take this position. [ Reisner, Mark. Cadillac Desert, New York Penguin 1987. ]

Bradley was re-elected in 1984 with 64 percent of the vote, and he still retained popularity in New Jersey from his Knicks days and from practices such as his annual Labor Day talk-to-citizens stroll along beaches. In 1988, there was speculation that he might seek the Democratic nomination for President, and he polled well in early primary states, but he eventually decided not to run. In 1990, a controversy over a state increase—on which he refused to take a position—turned his once-obscure rival for the Senate, , into a viable candidate. Bradley won by only a slim margin. In 1996, he opted not to run for re-election, publicly declaring American politics "broken."

Bradley ran in the 2000 presidential primaries, opposing incumbent Vice President for his party's nomination. Bradley campaigned as the liberal alternative to Gore, taking positions to the left of Gore on a number of issues, including , , and .

On the issue of taxes, Bradley trumpeted his sponsorship of the , which had significantly cut tax rates while abolishing dozens of s. He voiced his belief that the best possible tax code would be one with low rates and no loopholes, but he refused to rule out the idea of raising taxes to pay for his health care program.

On , Bradley reversed his previous support of school vouchers, declaring them a failure. He proposed to make over $2 billion in s available to each state every year for education. He further promised to bring 60,000 new teachers into the education system annually by offering s to anyone who agreed to become a teacher after graduating.

Bradley also made a significant issue in his campaign. Having voted against the , better known as the "Welfare Reform Act," which, he said, would result in even higher levels, he promised to repeal it as president. He also promised to address the , expand the Earned Income Tax Credit, allow s on welfare to keep their payments, make the Dependent Care Tax Credit refundable, build support homes for pregnant teenagers, enroll 400,000 more children in , and increase the availability of food stamps.

Bradley's campaign initially had strong prospects, due to high-profile endorsements and as his fundraising efforts gave him a deep war chest. However, it floundered, in part because it was overshadowed by Senator 's far more attention-gaining, but ultimately unsuccessful, campaign for the Republican nomination; McCain had stolen Bradley's "thunder" on several occasions. Bradley also failed to win two early primaries. He was much embarrassed by his two to one defeat in the , despite spending heavily there, as the unions had pledged their support for Gore. He then lost the New Hampshire primary 53-47 percent, which ended any hope of him making up ground to Gore. Bradley finished a distant second during each of the primaries on .

Bradley has mostly stayed out of the limelight since his failed 2000 presidential primary campaign, working mainly as a corporate and . He is chief outside advisor to 's non-profit practice. In 2005, he joined the advisory board of British corporate investigation firm , and in 2004, he joined the Board of Directors of Meetup. Oxford University awarded Bradley an honorary Doctor of Civil Law (DCL) in 2003, with the comment that he was "An outstandingly distinguished athlete, a weighty pillar of the Senate, and still a powerful advocate of the weak." Currently, Bradley serves on the Board of Directors of Superprotonic, a solid acid-based fuel cell technology development company. [ [http://www.superprotonic.com/about.html#directors :: Welcome to Superprotonic :: About Us :: ] ]

Despite some speculation about a second presidential run, he did not run in 2004 and has shown no interest in returning to political office. In 2002, he reportedly turned down a last-minute offer from New Jersey Democrats to replace on the ballot for his old Senate seat ( accepted it instead). In January 2004, Bradley endorsed for President in the 2004 Democratic primaries, along with his old rival Al Gore. Bradley and Gore also helped Dean to become the national chairperson of the after the 2004 election. Bradley's book "" was released on March 27, 2007.

Bradley has been strongly associated with the project, which is aired on 's "", that collects the stories of everyday Americans for the American Folklife Foundation. (See their 2007 published book, "Listening is An Act of Love".)

In January 2008, Bradley announced that he was supporting in that year's presidential primary. [ [http://blogs.abcnews.com/politicalradar/2008/01/bill-bradley-ba.html Political Radar: Bill Bradley Backs Barack Obama ] ] He campaigned for Obama and appeared on political news shows as a surrogate.

Bradley currently resides in . He was married for 33 years to Ernestine Misslbeck Schlant Bradley; they separated in 2007 [http://www.firstwivesworld.com/relevant-news/katherine-mckee/bill-bradley-separates-wife] . They have one daughter, Theresa Anne, and Mrs. Bradley also has a daughter, Stephanie, from a previous marriage to a physician named Robert Schlant. She is also a breast cancer survivor. The Bradleys have four grandchildren.