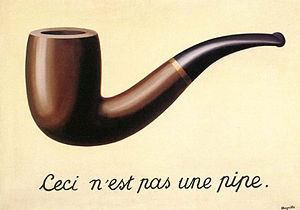 The Treachery Of Images (1928-29) by René Magritte depicts a pipe along with text stating "This is not a pipe." Note: This image is an illustration of a self-reference case only if the demonstrative pronoun "ceci ("this") refers not to the idea of a pipe, but to the pipe-image, or to the sentence in which the word, "ceci", occurs. Neither the pipe-image nor the sentence is a functional pipe.

Self-reference occurs in natural or formal languages when a sentence or formula refers to itself. The reference may be expressed either directly—through some intermediate sentence or formula—or by means of some encoding. In philosophy, it also refers to the ability of a subject to speak of or refer to himself, herself, or itself: to have the kind of thought expressed by the first person pronoun, the word "I" in English. Self-reference is related to self-reflexivity and apperception.

Self-reference is studied and has applications in mathematics, philosophy, computer programming, and linguistics. Self-referential statements sometimes have paradoxical behavior. 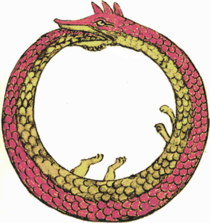 The Ouroboros, a dragon that continually consumes itself, is used as a symbol for self-reference.

An example of a self-referential situation is the one of autopoiesis, as the logical organization produces itself the physical structure which creates itself.

In metaphysics, self-reference is subjectivity, while "hetero-reference", as it is called (see Niklas Luhmann), is objectivity.[citation needed]

Self-reference also occurs in literature and film when an author refers to his work in the context of the work itself. Famous examples include Cervantes's Don Quixote, Denis Diderot's Jacques le fataliste et son maître, Italo Calvino's If on a winter's night a traveler, many stories by Nikolai Gogol, Lost in the Funhouse by John Barth, Luigi Pirandello's Six Characters in Search of an Author, and Federico Fellini's 8½ . This is closely related to the concepts of breaking the fourth wall and meta-reference, which often involve self-reference.

The surrealist painter René Magritte is famous for his self-referential works. His painting The Treachery of Images, shown above, includes words claiming, in French, that it is not a pipe, the truth of which depends entirely on whether the word "ceci" (in English, "this") refers to the pipe depicted—or to the painting or the sentence itself.

In computer science, self-reference occurs in reflection, where a program can read or modify its own instructions like any other data. Numerous programming languages support reflection to some extent with varying degrees of expressiveness. Additionally, self-reference is seen in recursion (related to the mathematical recurrence relation), where a code structure refers back to itself during computation.

Many of the following examples appear in Douglas Hofstadter's Gödel, Escher, Bach: an Eternal Golden Braid, Metamagical Themas, or I Am a Strange Loop.

Neuroscience research suggests the existence of neuroplasticity, a phenomenon in which thinking processes change the neural circuitry and structure of the brain.[citation needed]

Fumblerules state rules of good grammar and writing through sentences that violate those very rules. (Examples: "Avoid cliches like the plague" and "Don't use no double negatives".) George L. Trigg and William Safire have made their own lists, but anyone knowledgeable of grammar can do the same.