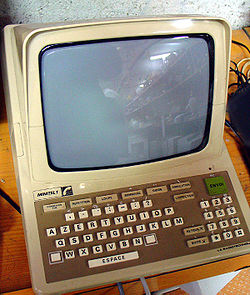 The Minitel is a Videotex online service accessible through the telephone lines, and is considered one of the world's most successful pre-World Wide Web online services. It was launched in France in 1982 by the PTT (Poste, Téléphone et Télécommunications; divided since 1991 between France Télécom and La Poste). From its early days, users could make online purchases, make train reservations, check stock prices, search the telephone directory, have a mail box, and chat in a similar way to that now made possible by the Internet.

In February 2009, France Telecom indicates the Minitel network still has 10 million monthly connections, among which 1 million on the 3611 (directory). France Telecom is planning to retire the service on the 30th of June 2012.[1] 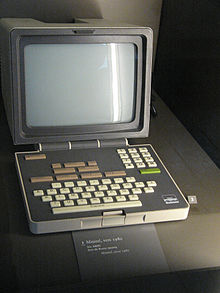 Millions of terminals were handed out free to telephone subscribers, resulting in a high penetration rate among businesses and the public. In exchange for the terminal, the possessors of Minitel would not be given free "white page" printed directories (alphabetical list of residents and firms), but only the yellow pages (classified commercial listings, with advertisements); the white pages were accessible for free on Minitel, and they could be searched by a reasonably intelligent search engine; much faster than flipping through a paper directory.

France Télécom estimates that almost 9 million terminals—including web-enabled personal computers (Windows, Mac OS, and Linux)—had access to the network at the end of 1999, and that it was used by 25 million people (of a total population of 60 million).

The Minitel allowed access to various categories of services:

The development of Minitel spawned the creation of many start-up companies in a manner similar to the later dot-com bubble of Internet-related companies. Similarly, many of those small companies floundered and failed because of an overcrowded market or bad business practices (lack of infrastructure for online retailers). The messageries roses ("pink messages", adult chat services) and other pornographic sites were also criticized for their possible use by under-age children. The government chose not to enact coercive measures, however, stating that the regulation of the online activities of children was up to parents, not the government. The government also enacted a tax on pornographic online services.

France Télécom charges Minitel users at rates of up to €1 a minute on their monthly telephone bill. The rates depend on the service called; most services are far cheaper than this maximum. It then pays back part of the sum to the companies that operate Minitel servers.

In the late 1990s, Minitel connections were stable at 100 million a month plus 150 million online directory inquiries, in spite of growing Internet use.

Minitel sales in the late 1990s accounted for almost 15% of sales at La Redoute and 3 Suisses, France's biggest mail order companies. In 2005, the most popular Minitel application was Teleroute, the online real-time freight exchange, which accounted for nearly 8% of Minitel usage.

In 2005 there were 351 million calls for 18.51 million hours of connection, generating € 206 million of revenue, of which € 145 million were redistributed to 2000 service providers (these numbers are declining at around 30% per year). There were still 6 million terminals owned by France Télécom, which had been left with their users in order to avoid recycling problems. The main uses were banking and financial services, which benefit from Minitel's security features, and access to professional databases. France Télécom mentions, as an example of usage, that 12 million updates to personal vitale health-care cards were made through Minitel.[2]

The most popular service of the Minitel was the "Annuaire Electronique" accessible through the Phonenumber "11". On October 18, 1996 (new French numbering system adapted), the access to the Phonedirectory changed to "3611". Companies could add up to 3 lines of complementary information and a "prehistoric" website. Ads to the Minitel Phone Directory were sold by ODA (Office d´Annonces), today Pages Jaunes Groupe in Sevres France. In 1991, the "Minitel Website" for the Paris Sony Stores contained already over 100 pages. Today, the use to the "3611" Minitel Directory is widely replaced by the online white or yellow pages, available through the websites Pagesjaunes.fr/Pagesblanches.fr (Groupe Pages Jaunes SA) or in English Yellowpages.fr/Whitepages.fr (Groupe Phonebook of the World).

On 11 February 2009, France Télécom and PagesJaunes announced that they were to cancel plans to end the Minitel service in March 2009. Its directory assistance service is still accessed over a million times a month.[3]

Minitel uses dumb terminals consisting of a text based screen, keyboard and modem. Simple graphics can be displayed using a set of predefined graphical characters. Aftermarket printers are available.[4]

When connecting, the Minitel integrated modem generally dials a special number connecting to a PAVI (Point d'Accès VIdéotexte, "videotext access point"). The PAVI transmits information back on to the servers of the appropriate company or administration using the Transpac X.25 network.

In France the most common dial number was "36 15", while "36 17" was used by more expensive services. Minitel services names were often prefixed with this number to identify them as such. Thus the "36 15" prefix had the same meaning as the ".com" suffix now has for Internet web sites; billboard ads at the time often consisted of nothing more than an image, a company name, and a "36 15" number, the fact that a Minitel service was being advertised was then clear by implication.

Minitel used a half-duplex asymmetric data rate via its modem. It downlinked at 1200 bit/s and uplinked at 75 bit/s. This allowed fast downloads, for the time. The system, which came to be known as '1275' was more correctly known as V.23. This system was developed solely for Minitel and its clones around the world.

Technically, Minitel refers to the terminals, while the network is known as Teletel.

Minitel terminals use the AZERTY keyboard most commonly used in French (as opposed to the QWERTY keyboard more common in the English-speaking world).

Minitel and the Internet

Minitel was often considered as an impediment for a fast deployment of the Internet in France, since it already provided safe and easy online access for many useful services without requiring a personal computer. Indeed, it still has advantages over the Internet: It does not require subscribing to a service (except the phone service), buying and maintaining a personal computer, and some scholars have shown that the Minitel was an early vehicle for growth of French SMEs. [5]

Additionally, the argument has been made that thanks to the Minitel, the French were used to doing transactions online and have embraced the Internet as it offers more value and convenience than the Minitel.

Minitel in other countries