In molecular biology and genetics, splicing is a modification of an RNA after transcription, in which introns are removed and exons are joined. This is needed for the typical eukaryotic messenger RNA before it can be used to produce a correct protein through translation. For many eukaryotic introns, splicing is done in a series of reactions which are catalyzed by the spliceosome, a complex of small nuclear ribonucleoproteins (snRNPs), but there are also self-splicing introns.

Simple illustration of exons and introns in pre-mRNA and the formation of mature mRNA by splicing. The UTRs are non-coding parts of exons at the ends of the mRNA.

Several methods of RNA splicing occur in nature; the type of splicing depends on the structure of the spliced intron and the catalysts required for splicing to occur.

Spliceosomal introns often reside in between eukaryotic protein-coding genes. Within the intron, a 3' splice site, 5' splice site, and branch site are required for splicing. The 5' splice site or splice donor site includes an almost invariant sequence GU at the 5' end of the intron, within a larger, less highly conserved consensus region. The 3' splice site or splice acceptor site terminates the intron with an almost invariant AG sequence. Upstream (5'-ward) from the AG there is a region high in pyrimidines (C and U), or polypyrimidine tract. Upstream from the polypyrimidine tract is the branch point, which includes an adenine nucleotide.[1][2] Point mutations in the underlying DNA or errors during transcription can activate a "cryptic splice site" in part of the transcript that usually is not spliced. This results in a mature messenger RNA with a missing section of an exon. In this way a point mutation, which usually only affects a single amino acid, can manifest as a deletion in the final protein.

Splicing is catalyzed by the spliceosome which is a large RNA-protein complex composed of five small nuclear ribonucleoproteins (snRNPs, pronounced 'snurps' ). The RNA components of snRNPs interact with the intron and may be involved in catalysis. Two types of spliceosomes have been identified (the major and minor) which contain different snRNPs.

The major spliceosome splices introns containing GU at the 5' splice site and AG at the 3' splice site. It is composed of the U1, U2, U4, U5, and U6 snRNPs and is active in the nucleus. In addition, a number of proteins including U2AF and SF1 are required for the assembly of the spliceosome.[2][3]
This type of splicing is termed canonical splicing or termed the lariat pathway, which accounts for more than 99% of splicing. By contrast, when the intronic flanking sequences do not follow the GU-AG rule, noncanonical splicing is said to occur (see "minor spliceosome" below).[4]

Trans-splicing is a form of splicing that joins two exons that are not within the same RNA transcript.[7]

Self-splicing occurs for rare introns that form a ribozyme, performing the functions of the spliceosome by RNA alone. There are three kinds of self-splicing introns, Group I, Group II and Group III. Group I and II introns perform splicing similar to the spliceosome without requiring any protein. This similarity suggests that Group I and II introns may be evolutionarily related to the spliceosome. Self-splicing may also be very ancient, and may have existed in an RNA world present before protein. Although the two splicing mechanisms described below do not require any proteins to occur, 5 additional RNA molecules and over 50 proteins are used and hydrolyzes many ATP molecules. The splicing mechanisms use ATP in order to accurately splice mRNA's. If the cell were to not use any ATP's, the process would be highly inaccurate and many mistakes would occur.

Two transesterifications characterize the mechanism in which group I introns are spliced:

The mechanism in which group II introns are spliced (two transesterification reaction like group I introns) is as follows:

tRNA (also tRNA-like) splicing is another rare form of splicing that usually occurs in tRNA. The splicing reaction involves a different biochemistry than the spliceomsomal and self-splicing pathways. Ribonucleases cleave the RNA and ligases join the exons together.

Splicing occurs in all the kingdoms or domains of life, however, the extent and types of splicing can be very different between the major divisions. Eukaryotes splice many protein-coding messenger RNAs and some non-coding RNAs. Prokaryotes, on the other hand, splice rarely and mostly non-coding RNAs. Another important difference between these two groups of organisms is that prokaryotes completely lack the spliceosomal pathway.

Because spliceosomal introns are not conserved in all species, there is debate concerning when spliceosomal splicing evolved. Two models have been proposed: the intron late and intron early models (see intron evolution). 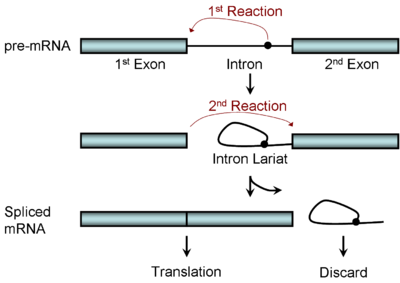 Spliceosomal splicing and self-splicing involves a two-step biochemical process. Both steps involve transesterification reactions that occur between RNA nucleotides. tRNA splicing, however, is an exception and does not occur by transesterification.

In many cases, the splicing process can create a range of unique proteins by varying the exon composition of the same messenger RNA. This phenomenon is then called alternative splicing. Alternative splicing can occur in many ways. Exons can be extended or skipped, or introns can be retained.

Splicing events can be experimentally altered[8] by binding steric-blocking antisense oligos such as Morpholinos or Peptide nucleic acids to snRNP binding sites, to the branchpoint nucleotide that closes the lariat,[9] or to splice-regulatory element binding sites.[10]

In addition to RNA, proteins can undergo splicing. Although the biomolecular mechanisms are different, the principle is the same: parts of the protein, called inteins instead of introns, are removed. The remaining parts, called exteins instead of exons, are fused together. Protein splicing has been observed in a wide range of organisms, including bacteria, archaea, plants, yeast and humans.[12]