Tteok (떡) (Korean pronunciation: [t͈ʌk]; also spelled ddeock, duk, dduk, ddeog, or thuck) is a class of Korean rice cakes made with glutinous rice flour (also known as sweet rice or chapssal), by steaming. Normal rice flour can be used for some kinds of tteok. There are hundreds of different kinds of tteok eaten year round. In Korea it is customary to eat tteok guk (tteok soup) on New Year's Day and sweet tteok at weddings and on birthdays. It is often considered a celebratory food and can range from rather elaborate versions with nuts and fruits down to the plain-flavored tteok used in home cooking. Some common ingredients for many kinds of tteok are mung bean, red bean, and sweet red bean paste, Korean mugwort, jujube and other dried fruits, sesame seeds and oil, sugar, and pine nuts. 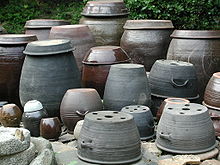 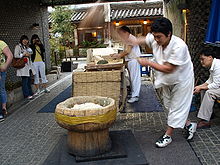 The below are cooking untensils to make tteok in the traditional Korean way.[1]

Tteok are largely divided into four categories, such as "steamed tteok" (찌는 떡), "pounded tteok" (치는 떡), "boiled tteok" (삶는 떡) and "pan-fried tteok" (지지는 떡). The steamed tteok is made by steaming rice or glutinous rice flour in "siru" (시루), or a large earthenware steamer, so it is often called "sirutteok" (시루떡). It is regarded as the basic and oldest form of tteok. The pounded tteok is made by using a pounding board or mortar after steamed first. In making pan-fried tteok, the rice dough is flattened like a pancake and pan-fried with vegetable oil. The shaped tteok are made by kneading a dough with hot water which is usually shaped into balls.[2]

Pat sirutteok, steamed tteok made with azuki beans and rice

The main ingredients for steamed tteok or "sirutteok" are rice (맵쌀, maepssal in Korean) or glutinous rice (찹쌀 chapssal) and sometimes they are mixed together. In some cases, other grains, beans (azuki beans or mung beans), sesame seeds, wheat flour, or starch can be mixed with the rice. Various fruits and nuts are used as subsidiary ingredients, such as persimmons, peaches or apricots, chestnuts, walnuts, and pine nuts. In addition, vegetables with flavors or herbs can be used to flavor the tteok. Danggwi leaves (Ostericum grosseserratum), seogi mushroom (manna lichen), daikon, artemisia, pepper, and cheongju are the most common flavorings, and honey and sugar are used as sweeteners.[2]

In order to make steamed tteok or sirutteok, rice or glutinous rice is soaked in water for a while, then ground. The prepared rice flour is put in a siru and steamed. According to steaming method, sirutteok is subdivided into two groups; seolgitteok (설기떡) is shaped into a single large lump whereas kyeotteok (켜떡) consists of multiple layers with azuki bean powder or other bean powder. Seolgitteok is also called muritteok (무리떡), regarded as the most basic form of sirutteok made only with rice. On the hand, in making kyeotteok, rice and glutinous rice are mixed. The name of kyeotteok derives from the adverb kyeokeyo (켜켜, literally "filed") in Korean because the tteok is made as such.[2] 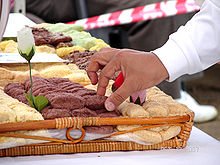 Rice and glutinous rice are peeled off to make grain particles or powder, and steamed in a siru (earthenware steamer) and then pounded with the untensils. The pounded tteok is divided into glutinous pounded tteok (찹쌀도병 chapssal dobyeong) and non-glutinous pounded tteok (맵쌀도병 mapssal dobyeong) by rice type. Injeolmi that is a representative of the glutinous pounded tteok has varieties in accordance with gomul types (고물, coating made with bean powder, sesame seeds, or sliced jujubes) or subsidiary ingredients mixed into the steamed rice while pounding on the anban. Patinjeolmi (팥인절미), and kkaeinjeolmi (깨인절미) are the examples for the former, coated with red bean powder and sesame respectively. In ssuk injeolmi (쑥인절미) and surichwi injeolmi (수리취인절미) are ssuk (Artemisia princeps var. orientalis) and surichwi (Synurus deltoides (AIT.) NAKAI) added. 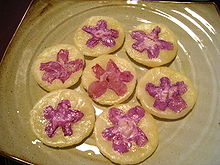 Dishes made with tteok