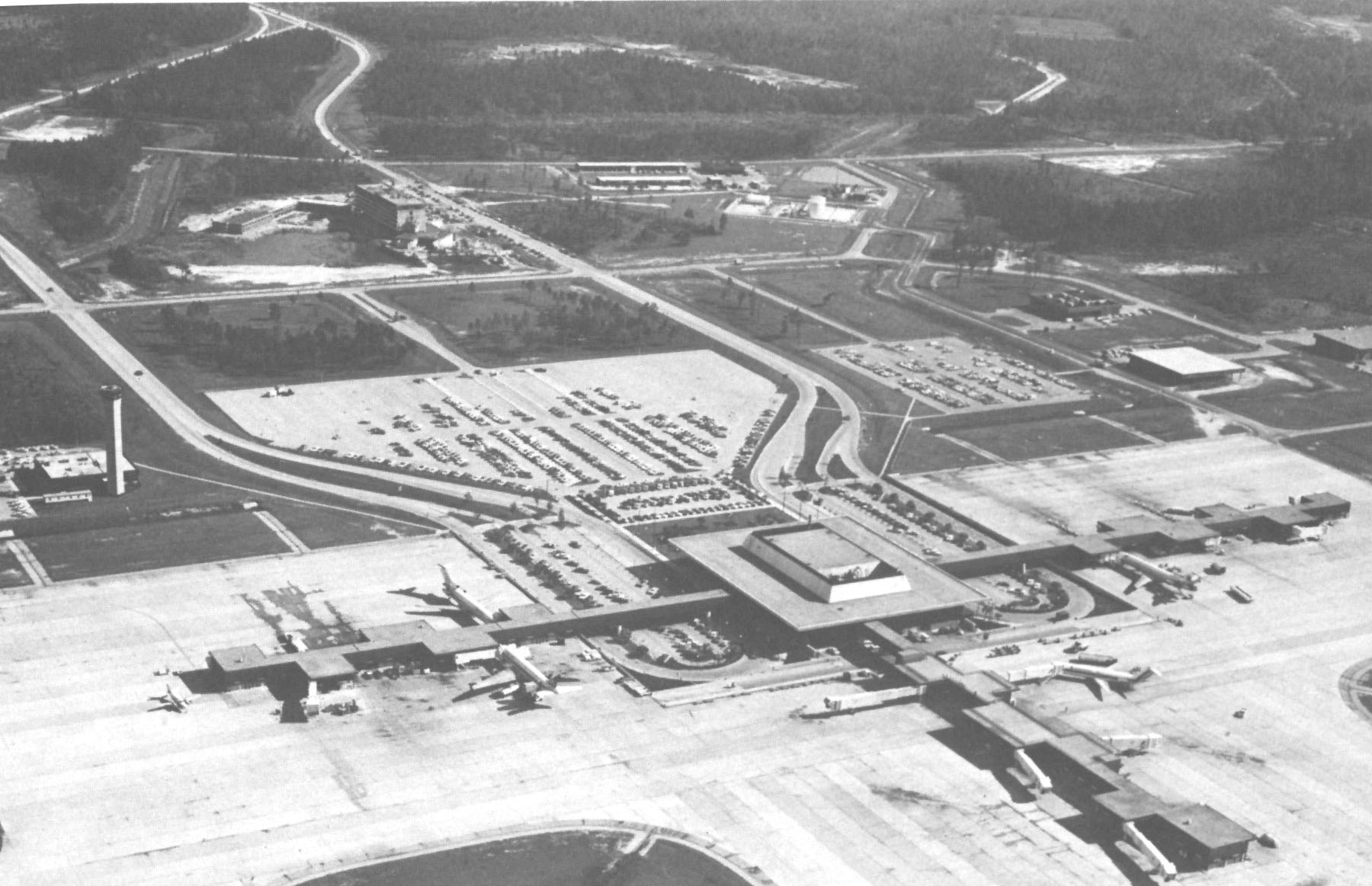 Construction of the airport started in 1965, in order for the city to accommodate a more cosmopolitan populace which was introduced with the sizable naval bases in the region. Jacksonville International was finally opened on October 31, 1968, replacing the antiquated . [ [http://www.geocaching.com/seek/cache_details.aspx?ID=109301 Error Occurred ] ] A new idea tried in the construction of Jacksonville International was the separating of departing and arriving passengers on two different sides of the terminal (as can be seen in the photo on this page). This is no longer the case though and the airport (which has been greatly expanded since the picture was taken) now utilizes the typical configuration whereby departing passengers are served on an upper level, accessed via an elevated roadway, while arriving passengers utilize the lower level of the terminal.

The FANG's (125 FW) has historically been assigned fighters in the intercept and air defense mission for the region. Since establishing Jacksonville Air National Guard Base at the airport, the unit has operated s, , and now flies . This is in addition to other support aircraft, such as a single , the Metroliner and multiple air and ground support roles.

Initially, Jacksonville International Airport was slow to expand, only serving two million passengers a year by 1982. However, the addition of more airline service in the late 1980s and early 1990s saw the need for more space in the complex. The airport served over five million passengers annually by 1999, and an airport expansion plan was approved in 2000. The first phase, which included rebuilding the landside terminal, the central square and main concessions area, as well as consolidating the security checkpoints to a single location, and adding more parking capacity was completed in 2004-2005. In 2007, 6,319,016 passengers were processed.

The Jacksonville International Airport includes onsite accommodations at the and Conference Center.

The second phase of the expansion program [http://www.jaa.aero/as/jia_expansion.asp] is being carried out over three years, commencing in mid-2006 and is projected to cost about $170 million. It includes demolishing concourses A and C of the airside terminal (which for the most part are built to late-1960's standards), and replacing them with more spacious, modern facilities and adding more gates. These two new concourses are slated to open by the spring of 2009. Concourse B will be rebuilt at a later date. Also included is a further expansion of the parking system and a new automated baggage screening system.

In order to accommodate constructing the new airside terminal and apron, most of the western-facing gates in concourses A and C have been permanently closed.

The new Concourse A is now officially open and the new Concourse C is expected to open in late 2008. Both concourses will house ten gates each and have moving walkways. Future plans call for expanding the newly built concourses by 2020 and possibly adding a system to the airport. Along with the openings of the new concourses will be more shops, restaurants and food choices for travelers pre and post security. The airport is already home to onsite facilities including , , , , , , , , and among others.

lists Jacksonville as one of 30 cities it might serve in the next five years. [ [http://www.primenewswire.com/newsroom/news.html?d=123246 Virgin America Opens for Business With a Million Seats to Sell ] ]

The airport authority is currently trying to add non-stop flights to Phoenix and San Juan with an eye on establishing charter service to Europe.

Future plans include connecting the airport with the onsite via a moving walkway.

The airport's two runways are laid out in "V" configuration (with the bottom tip of the "V" pointing West). A long-range plan exists to build two additional runways, each paralleling one of the existing runways. A new runway alongside the existing southern runway will be built first. No date has been set for implementing the runway expansion plan (the expectation is that construction of the third runway would take place around 2015).

* is the only scheduled airline to provide service to Jacksonville International Airport using . Delta widebody aircraft (mostly the Boeing 767-300) are scheduled between Jacksonville and Atlanta.
* In the early 1970s Delta Air Lines considered service between Jacksonville and . In trial runs the runway surface cracked under the weight of the aircraft when it landed, and runways were soon reinforced to accommodate widebody aircraft. Delta initiated service on the route with the TriStar, the first widebody aircraft to operate scheduled service to and from JAX. The L-1011 was much better suited for the relatively short flight to and from Atlanta than the 747.
* At one time considered flying between Jacksonville and . BA wanted an airport on the east coast that would give its supersonic airliner access to the lucrative Florida market while having little air traffic congestion due to Concorde's considerable appetite for fuel. The idea was abandoned. Concorde did visit JAX on a charter flight. [ [http://www.concordesst.com/history/destinations.html?d=123246 Concorde History, Destinations 1976-2003 ] ]
* became the first airline to operate the into the airport when flight 75 from Manchester to Orlando was diverted on July 31, 2007 due to bad weather. Passengers stayed onboard and the flight later continued to Orlando.
* An Airways flight from Dusseldorf to Miami was the first into JAX. An emergency landing was made due to right engine failure on October 8, 2007. All 239 passengers were processed through a rarely used and facility located under Concourse C before officially entering the United States. Because of a faulty incinerator, the plane was further delayed due to inability to burn overseas trash.
* Although JAX is designated as an international airport, no airlines currently fly scheduled international flights to or from the airport. There is a regular charter flight to Mexico.
* What is now the Hotel & Conference Center, located on the grounds of JAX, originally opened as the Jacksonville Airport Hotel & Towers.