Cienega
For the California wine region, see Cienega Valley AVA.
Not to be confused with Ciénaga. 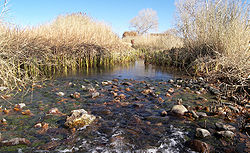 A cienega or cienaga (in modern Spanish ciénaga) is a Spanish Colonial term for a spring, that is in use in English in the southwestern United States. A cienega usually is a wet, marshy area at the foot of a mountain, in a canyon, or on the edge of a grassland where groundwater bubbles to the surface. Often, a cienega does not drain into a stream, but evaporates, forming a small playa.

Many lands have artificial cienegas, such as the Springs Preserve in Las Vegas, Nevada, in order for people to experience them.[citation needed]

Because evaporation usually causes the water to be alkaline, vegetation around a cienega commonly includes halophytes, including many unusual, rare, and endangered species of plants and animals. Notable among these is the monotypic genus Anemopsis, widely known in the southwestern United States as Yerba mansa.