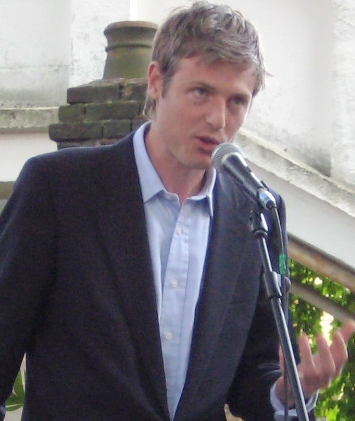 Goldsmith is one of the heirs to the wealth of his father, the late financier, .

Born at in , Goldsmith is the middle child of Sir and his third wife, . His parents were both married to other individuals when he was born,

Goldsmith received early education at Richmond's and in . At the age of nine, he attended . He enrolled at but was expelled at 16 when was discovered in his room.

After school, he traveled through , , , , , and worked in the and . Goldsmith lived in for two years, working first for an organization called Redefining Progress from 1995 to 1996 and later as a researcher for Helena Norberg-Hodge's (ISEC) during 1996-98.

Under the editorial management of ISEC and his uncle Teddy, in 1997, Goldsmith was appointed reviews editor of "The Ecologist".

In January 2006, after indicating his interest in electoral politics, he announced that he would "step back" to let the magazine become more independent of him.

In September 1998, with Goldsmith at the helm, "The Ecologist" critically covered the alleged anti-environmental record of the multinational company , including a broadside against genetically engineered foods written by .

Goldsmith sits on the advisory board of the JMG Foundation, which disburses grants globally to a range of environmental advocacy groups using the fortune left by James Goldsmith. His investments, most of which have incurred financial losses,

Goldsmith is an experienced speaker and writer on environmental causes in Britain. He has debated twice at the Oxford Union and was a keynote speaker at The Sustainable Environment Foundation's annual conference on 17 April 2008.

His familial links to politics include his grandfathers, who were both Conservative members of parliament; was a Tory MP and the 8th Marquess of Londonderry representated as a member of 's party. His half-brother, Robin Birley, has also been a longstanding financial contributor of the party. Before 2005, Goldsmith supported and was involved in the campaigns of Michael Gove MP and Joanne Cash. As part of the Conservative party, in 2006, he said: cquote| If you had asked me six years ago would I want to be part of the Conservative Party I would have said no. I am cynical about politicians. My experience of politicians has been thoroughly negative. I have found that politicians are people that can not be taken at face value. There are very few politicians I have been impressed with.

In April 2005, Goldsmith claimed that if he was Prime Minister, he would "introduce direct democracy... which means that ordinary people can call a referendum on any subject they want, providing they can gather enough signatures."

Goldsmith is an opponent of globalisation and has been a vocal supporter of the views that were the mainstay of his father's politics. In a 2001 editorial entitled "Cowards one and all," he claimed that all three of the major British political parties were corporation-friendly and unwilling to tackle what he perceives are the dangers of globalisation.

Goldsmith is a pro-hunting advocate. He has proposed a "heavy purchase tax" for highly polluting automobiles and is an advocate of a levy on aviation fuel, particularly on cargo planes.

In December 2005, David Cameron appointed Goldsmith as the deputy chairman, under former environment secretary , of a Quality of Life Policy Group. The commission was entrusted with the responsibility of examining carbon emissions and other quality-of-life issues such as climate change, clean air and transport, and to offer policy ideas based on the review.

The recommendations of the policy group included: higher taxes on short-haul flights and gas-guzzling cars; power station waste heat levy; rebates on stamp duty; a moratorium on airport expansions and curbs on energy-wasting household goods; disclosure of greenhouse gas emissions in large listed business's financial reporting; council tax for people who make environmentally-friendly improvements to their properties; verification and certification on bio-fuels, including full life-cycle assessment of greenhouse gases; use of Renewable Transport Fuel Obligation (RTFO); new charges for parking at out of town superstores; feed-in tariffs for small-scale low carbon technologies; a clampdown on energy-wasting stand-by lights; and a cap on energy use by domestic appliances.

Besides opposition from the Labour Party, some of these proposals were criticised by green campaigners, the aviation industry and even a few Conservative politicians. , a Tory MEP, described the proposals as "half-baked", adding that, "The whole approach is anti-Conservative."

Goldsmith's vast inherited wealth has been portrayed as a political liability by critics, with many commentators accusing him of being an out-of-touch elite. He has countered by stating, "I don't need to have a career in politics. I'm in a very, very luxurious position, but I am in a position of strength." A press release about one of his televised interview appearances introduced him as someone whose "detractors say he's a spoilt rich kid indulging a romantic personal obsession that has little to offer the real world". Goldsmith claims that while he might be "easy to dismiss", he is not a or a "hooray". "I wouldn't reverse anything that has happened to me in terms of my life or my background, because I totally depend on it. The fact is that if I didn't have all that, if I was just the editor of The Ecologist, then The Ecologist would not be growing, because I wouldn't have the kind of platforms that I have," he explained in 2003. He has, though, admitted that he is "not 100% comfortable with [his] background" even as "it has made [his] life possible".

In 2008, Goldsmith was embroiled in a breach of electoral rules after he donated £7,000 to his local party while he was not on the electoral roll, which is in violation of standard campaign rules. Goldsmith, who spent £90,000 of his personal fortune to finance his parliamentary campaign in 2007, defended himself by explaining, "For a few weeks last year I was not on the electoral roll, as I had removed myself from Kensington and Chelsea and was in the process of signing up in Richmond. Whatever was donated in that time may have to be repaid, but there is no suggestion that it was anything other than an oversight."

Goldsmith married Sheherazade Ventura-Bentley on 5 June 1999 at St Simon Zelotes church in . The wedding was followed by a reception at The Ritz and a dance at .

Goldsmith is described by his mother and reporters to be of a gentle nature. His early girlfriends included and Caroline Hickman.