Rule of three (writing)
For other uses, see Rule of Three. 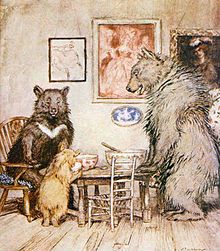 The "rule of three" is a principle in writing that suggests that things that come in threes are inherently funnier, more satisfying, or more effective than other numbers of things. The reader/audience of this form of text is also more likely to consume information if it is written in groups of threes. From slogans ("Go, fight, win!") to films, many things are structured in threes. Examples include The Three Stooges, The Three Musketeers, Three Little Pigs, Three Billy Goats Gruff, Goldilocks and the Three Bears and Three Blind Mice.

A series of three is often used to create a progression in which the tension is created, then built up, and finally released. Similarly, adjectives are often grouped together in threes in order to emphasize an idea.

The Latin phrase, "omne trium perfectum" (everything that comes in threes is perfect, or, every set of three is complete) also conveys the same idea as the "rule of three", interestingly using exactly three words.

One of the best examples of the power of the Rule of Three is in comedy. Three is the smallest number of points that can form a pattern, and comedians exploit the way our minds perceive expected patterns to throw you off track (and make you laugh) with the third element.

The generic three-panel daily comic strip, and "Englishman, Irishman and Scotsman" joke are some more examples of the rule of three used in comedy.

In storytelling in general, authors often create triplets or structures in three parts. In its simplest form, this is merely beginning, middle, and end, from Aristotle's Poetics. Syd Field wrote a popular handbook of screenwriting, in which he touted the advantages of three act structure over the more traditional five act structure used by William Shakespeare and many other famous play-writers. 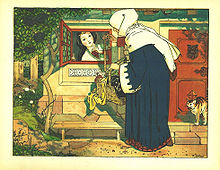 Vladimir Propp, in his Morphology of the Folk Tale, concluded that any of the elements in a folk tale could be negated twice, so that it would repeat thrice.[1] This is common not only in the Russian tales he studied, but throughout folk tales and fairy tales—most commonly, perhaps, in that the youngest son is often the third, but fairy tales often display the rule of three in the most blatant form, a small sample of which includes:

In most folklore, there are three tasks which have to be performed to reach a certain goal.

The use of a series of three elements is also a well-known feature of public oratory. Max Atkinson, in his book on oratory entitled 'Our Masters' Voices'[2] gives interesting examples of how public speakers use three-part phrases to generate what he calls 'claptraps', evoking audience applause.

Examples include the Nazi slogan Ein Volk, Ein Reich, Ein Führer!, the appeal to "government of the people, by the people, for the people" in Lincoln's Gettysburg Address, and former British Prime Minister Tony Blair's mantra of "Education, education, education". The last of these echoes common phrases such as "Location, location, location" (discussing real estate), or "Lies, damn lies, and statistics" (attributed to Benjamin Disraeli). An early example from Julius Caesar's De Bello Gallico ("on the Gallic War') is Veni, vidi, vici.

Martin Luther King Jr., the civil rights activist and preacher was also known for his uses of tripling and the rule of three throughout his many influential speeches. For example, the speech "Non-Violence and Racial Justice" contained a binary opposition made up of the rule of three: "insult, injustice and exploitation," followed by a few lines later by, "justice, good will and brotherhood." Conversely, segregationist Alabama governor George Wallace famously inveighed: "segregation now, segregation tomorrow, segregation forever" during his 1963 inaugural address.

One of the best known instances of this in written political rhetoric is the appeal of the U.S. Declaration of Independence to "life, liberty and the pursuit of happiness" as exemplary of the most basic "unalienable rights".

The appeal of the three-fold pattern is illustrated by the transformation of Winston Churchill's famous reference to "blood, toil, tears and sweat" (echoing Garibaldi and Theodore Roosevelt) in popular recollection to "blood, sweat and tears".

The use of three elements is present in the three Abrahamic religions: